Here she is! First picture of nun who had baby without knowing she was pregnant (PHOTO)

This is the first picture of nun and new mother Roxana Rodriguez.

The 33-year-old woman, a nun with the order of the Little Disciples of Jesus, stunned her mother superior and local church chiefs after giving birth last week to a baby boy which she has called Francis, in honour of the current Pope.

Sister Roxana initially claimed to have no idea that she was pregnant and thought her labour pains were ‘stomach cramps’ when an ambulance rushed her to hospital in severe pain after being called by fellow nuns when she collapsed at her nunnery. 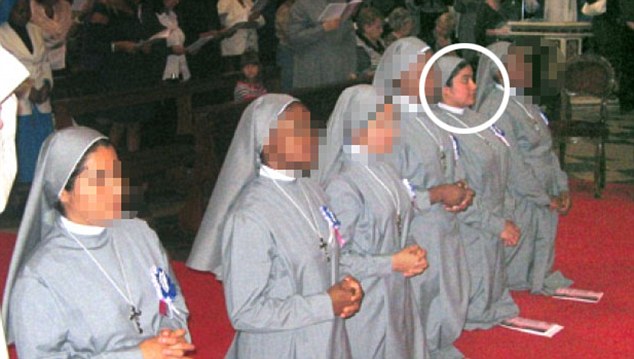 Roxana Rodriguez, a nun with the order of the Little Disciples of Jesus, stunned her mother superior and local church chiefs after giving birth last week to a baby boy

Her picture was published in the Italian daily newspaper Corriere Della Sera, who have carried out an investigation into the circumstances surrounding the birth of 9lb Francis and have spoken to the the social worker in the case.

It shows Sister Roxana, who is currently in the first floor maternity unit at the San Camillo de Lellis hospital in Rieti, 50 miles north of Rome, as she took her vows and became a nun in the order last September.

She told her social worker Anna Fontanella:’I am so happy. I feel more of a mother than a nun, I think that’s obvious. I decided to call him Francis in honour of our wonderful south American Pope. I do not feel of guilt. I will be keeping him and bringing him up.

‘He is a gift from God. I am little worried about all the publicity, not only in Italy but in El Salvador and all over the world. Everyone is talking about this and I don’t think I will be able to return to my home country, let alone Rieti.’

Sister Roxana has written a letter of apology to the order’s mother superior general Elvira Petaraca – the woman who in September she solemnly promised to follow her vows of ‘chastity, poverty and obedience’, the three main pillars of the Little Disciples of Jesus Order.

The nun had only arrived in Italy last summer at the nunnery in Rieti and has told officials that the father is a man from her native El Salvador but she has so far not named him.

Father Benedetto Falcetti, priest at the nearby St Michael’s church in Rieti, said: ‘It all happened last spring, around March or April time when she was back in El Salvador to get her passport renewed.

‘She has not said who the father is but I understand he is an, shall we say, old flame of hers from when she was younger. At some stage I expect she will tell the father that he has a son and they will be reunited but I don’t know when that will be.’ 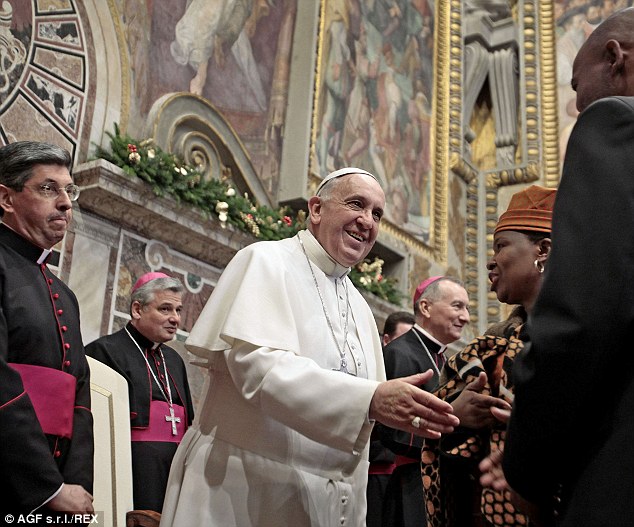 The nun stunned her mother superior and local church chiefs after giving birth last week to a baby boy which she has called Francis, in honour of the current Pope

However not all sure Father Falcetti ‘s delight at the birth, apart from the anger of her superiors, sister Roxana has also upset her fellow nuns at the convent in Campomoro.

One nun who answered the telephone at the convent and who asked not to be named said:’No we must certainly not be going to visit her. What she has done is not right at all. She has betrayed her vows. She will not be coming back here.’

Since news of the birth was announced the hospital has been flooded with gifts for the nun and her new baby including nappies, clothes and money.

Hospital director Pasquale Carducci said:’We have had to put extra security on the maternity wing because of all the interest. Like any new mum she is delighted but obviously this has created a great deal of clamour because she is a nun.

‘There have been calls and gifts from dozens of well wishers and she has passed on her thanks to all these people. Medically she and the baby are doing well and I expect them to be discharged by Tuesday at the latest.’

Massimo Casciani, spokesman for the local bishop of Rieti, monsignor Delio Lucarelli, said: ‘At some point the bishop will visit the nun but at the moment he has not yet seen here.

‘We shall be investigating the circumstances behind – the child could be the fruit of a consensual rapport but it could also have been as a result of violence. That’s why we need to investigate properly.’