A top PR person, Justine Sacco, who works for InterActiveCorp, a New York conglomerate run by Barry Diller, has landed herself in trouble after she put up a racist tweet yesterday, as she made her way to an African country on an official trip.

Sacco, referred to herself as a ‘troublemaker on the side’, and known for her ‘loud laugh’, on her now deactivated Twitter account.

The PR executive, unknowingly tweeted what would later result to her downfall, as she waited to board her flight in a London airport. 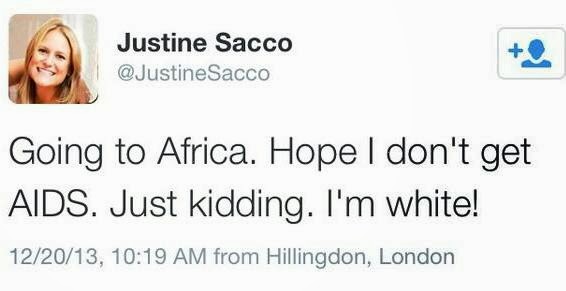 Unfortunately for her, she couldn’t take the tweet down immediately because she was on a long flight to Africa. However, when she landed several hours later, there was already an outcry on Twitter, and her company had to issue a statement immediately to that effect.

“This is an outrageous, offensive comment that does not reflect the views and values of IAC,” the statement  read. “Unfortunately, the employee in question is unreachable on an international flight, but this is a very serious matter, and we are taking appropriate action.”

Several people went up on Twitter to express their anger and shock via the trending hashtag #HasJustineLandedYet:

Sometimes you land with more baggage than you took off with. #HasJustineLandedYet

So yesterday’s comment wasn’t @JustineSacco‘s first offense. Your timeline could be your worst enemy. #HasJustineLandedYet

Go back to your beloved America. We sure don’t want you here. Go!!!!! #HasJustineLandedYet

I wish somebody could just give her a huge fist to her face and knock some reality into that ignorant racist woman! #HasJustineLandedYet