Two Syrian rebels were publicly crucified by Islamic extremists in northeastern Syria in revenge for a grenade attack on members of their group.

According to reports, the jihadist Islamic State of Iraq said it had executed a total of seven prisoners accused of carrying out a grenade attack on one of its fighters earlier this month in the Euphrates Valley city of Raqqa.

The jihadist group which Al Qaeda have been distancing themselves from, wrote on Twitter: ‘Ten days ago, attackers on a motorbike threw a grenade at an ISIL fighter at the Naim roundabout. A Muslim civilian had his leg blown off and a child was killed.

‘Our fighters immediately set up a roadblock and succeeded in capturing them. They were then able to detain other members of the cell.’

The photographs of the two prisoners who were crucified and dead were posted by a Britain-based Syrian Observatory for Human Rights.

Their bodies left on the stake were in the view of passers-by who were walking past the two men, apparently unfazed.

One of the men is pictured with a banner wrapped round his body which reads: ‘This man fought against Muslims and threw  a grenade in this place.’

Abu Ibrahim Alrquaoui, who described himself as a founder of the group Raqqa Is Being Slaughtered Silently, told FoxNews.com that those killed had previously fought against the Syrian government of Bashir al-Assad.

He said he witnessed the executions and took photographs which are now being circulated online.

The Syrian Observatory for Human Rights said they were not the first crucifixions by ISIL. On April 16, its fighters executed a man for theft from a Muslim in the same way. 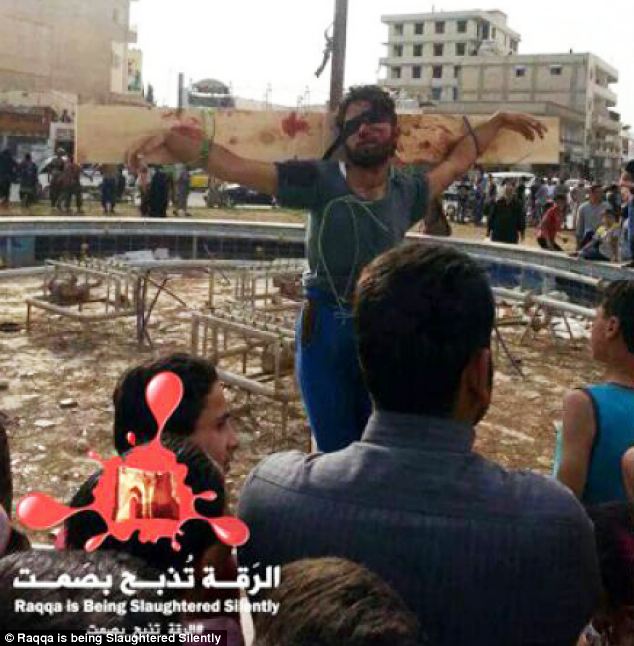 ISIL’s exactions caused a backlash against them from rival rebel groups, including Al-Qaeda’s official Syria affiliate Al-Nusra Front, who joined forces against its fighters from the start of the year.

ISIL has now been forced out of much of northern Syria but its fighters remain entrenched in Raqqa – the only provincial capital entirely outside Syrian government control – and much of its surrounding province.

The group also carried out three executions in the Raqqa provincial town of Tal Abyad, on the Turkish border, and two more in the town of Saluq, the Observatory said.

Last week, ISIL claimed responsibility for a series of explosions which killed 28 people and left more than 40 injured at a political rally in Iraq on Friday. 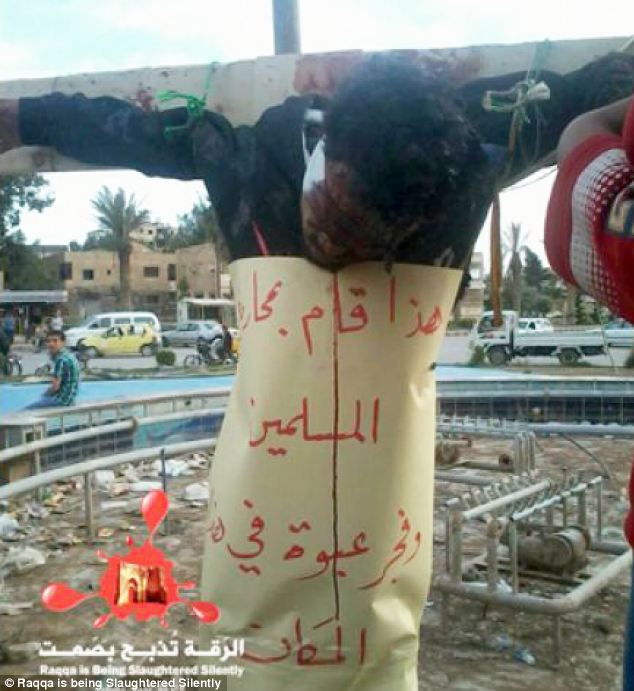 The militant group Asaib Ahl Haq (League of the Righteous) was presenting its candidates for elections on April 30 at the rally in eastern Baghdad.

Three bombs exploded in succession as people were leaving, reporters at the scene said.

A roadside bomb went off near the main gate, followed by a suicide car bomb after a few minutes and then a final explosion.

In a statement posted on the internet, ISIL said it had carried out the bombings in response to ‘murder, torture and displacement’ of Sunnis by Shi’ite militias which ‘massacred children and women’.

In February, MailOnline reported how a Syrian girl was stoned to death for opening a Facebook account after a court, under the jurisdiction of ISIL, ruled the act of being a member of the social network deserved to be punished the same way as adultery.