Banire and the chapter’s members have been having a strong disagreement and even the intervention of the National Working Committee has not changed anything.

Banire had accused top members of the APC in Lagos of working against internal democracy and not allowing popular candidates to represent the party in the election.

This drew the anger of the top hierarchy of the party but the legal practitioner refused to back down.

But in a letter published by TheCable, the local government executives asked Banire to appear before a ward disciplinary committee on Monday. 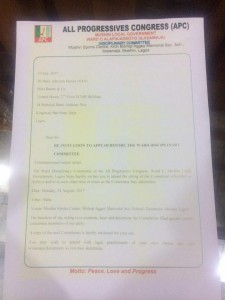 “The ward disciplinary committee of the All Progressives Congress, Ward C, Mushin local government, Lagos state, hereby invites you to attend the sitting of the committee scheduled as follows and of such other time or times as the committee may determine,” read the letter signed by Badru Olaide, secretary of the ward.

“The business of the meeting is to examine, hear and determine the complaints filed against you by concerned members of our party.

“You may wish to attend with legal practitioners of your own choice and such witness documents as you may determine.”

The letter said, “interested members of the public, members of the press, domestic and international observers/monitors are expected to be seated at the venue by 9:45 am”.