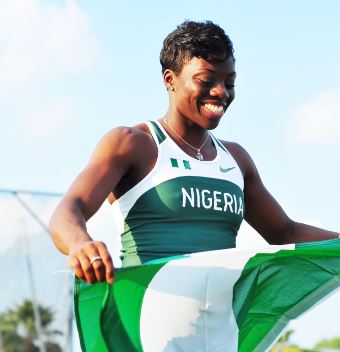 Bobsled pilot, Seun Adigun led three other team members to represent Nigeria at the recently held Winter, Olympics in Pyeongchang County, South Korea and has now been officially recognised as the first African, both in the male or female categories to compete in both the winter and summer Olympics.

Ayako Ito of the International Olympic Committee (IOC), in a message, noted that The Olympic Study Centre has confirmed this recognition.

It would be noted that the African star athlete and bobsled driver is among the only two athletes to be so recognised at the Pyeongchang Winter Olympics. The second being Pita Taufatofua of Tonga, a taekwondoist turned skier.

Adigun who represented Nigeria in Athletics at the Summer Olympics and Nigeria in Bobsleigh in 2018 at the Winter Olympics expressed her delight at being bestowed with such a prestigious accolade. She said, “This is a real-life example of what it means to represent African excellence and a true testament to the fact that impossible is nothing. This milestone is truly a blessing”.

Discussing her preparations for the 2012 Summer Games, Adigun remarked, “My preparations during athletics was driven by the desire to prove to myself that I was capable of competing with the best in the world in the women’s 100-meter hurdles. I wanted to look back on my career as a hurdler and know that despite any limitations or health obstacles, I genuinely gave all that I had to achieve the highest level of competition”.

Adigun further disclosed how she prepared for the Winter Games, “The preparations for the Winter Games was different in the sense that my passion was driven by my self-less intentions to create positive representation for Nigerians and Africans, globally. That passion was accompanied by several thoughts of fear and anxiety, but it was overcome by God’s grace and the support of everyone who played a part in the journey, no matter how big or small”.

Adigun added that she dedicated herself to creating a legacy that would inspire generations, eternally, and whatever accolades came along the way would be celebrated as blessings.