The recent terrifying spate of ‘cannibal attacks’ seems to have spread to China, as a drunk bus driver was caught on camera gnawing at a woman’s face in a horrific random attack.

The unfortunate woman will apparently require plastic surgery to repair the damage done by her crazed attacker.

According to local news reports, the driver, named Dong, had been drinking heavily during lunch with his friends before the outburst on Tuesday.

He then ran on to the road in the city of Wenzhou, in south-east China, and stood in front of the car being driven by a woman named Du, stopping her from moving. 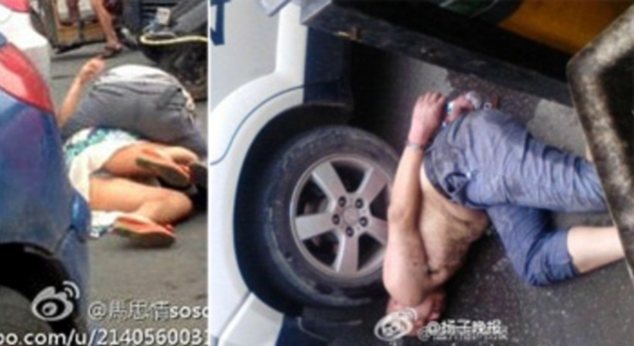 Attack: A man named Dong was seen gnawing on the face of a woman (left) but was later arrested (right)

Dong climbed on the car’s hood and started beating the vehicle while the panicked woman screamed for help.

When she left the car and tried to escape, the bus driver leaped on top of her and wrestled her to the ground.

It was then that Dong started biting Du’s face, leaving her covered in blood and weeping as passers-by tried to pull the attacker off his victim.

Witnesses said that the bus driver had gone ‘crazy’ and was successfully resisting attempts to subdue him. 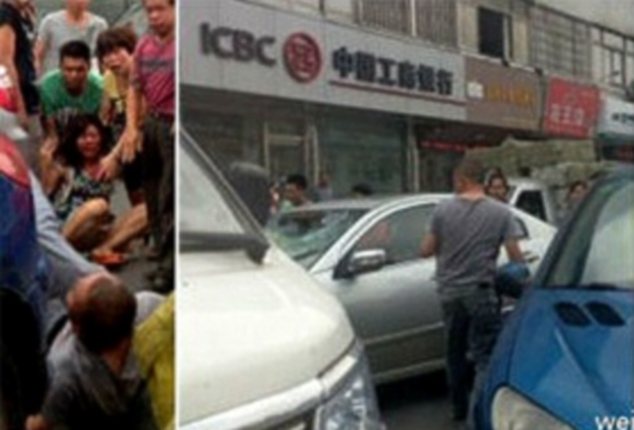 Devastated: Du (left) will require plastic surgery after the attack on a crowded Chinese street (right)

When police arrived, they managed to take Dong into custody, bringing the appalling rampage to an end.

Du was taken to hospital, where doctors said she would need surgery to repair her nose and lips.

The incident comes in the wake of a number of similar attacks committed by drugged-up psychopaths in the U.S.

Perhaps the best-known of these came in May, when Rudy Eugene chewed a homeless man’s face off before being shot dead by police.