Smoking HOT! Beyonce shows off her bootylicious body in leather boots while puffing on a cigar (PHOTOS)

She is famous for her curvy figure and bootylicious behind.

And Beyonce manages to show both off to the maximum in a brand new photoshoot. 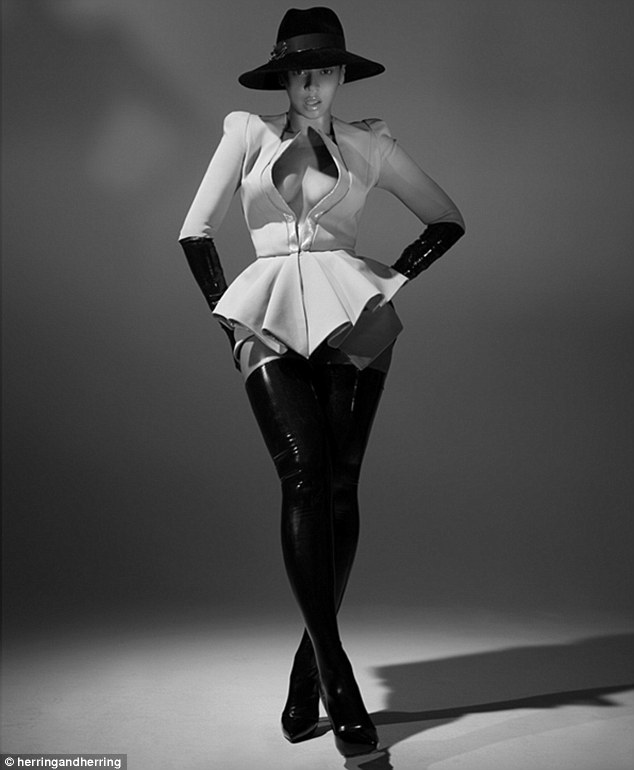 Thigh high stunner: Beyonce shows off her curves in a pair of leather boots and a white peplum short and gloves in images taken from a Herring & Herring photoshoot, some of which were used for her 2014 calender

The photographs, taken by Herring & Herring, are a mixture of black and white and colour – with many of them used in Beyonce’s forthcoming 2014 calender.

Another striking image features the singer puffing on a cigar wearing another black hat, round sunglasses and a tweed jacket also open to reveal her chest.

The star’s bootilicious behind is also on full display – one picture shows her posing provocatively behind a door wearing what appears to be a pair of pale white PVC panties. 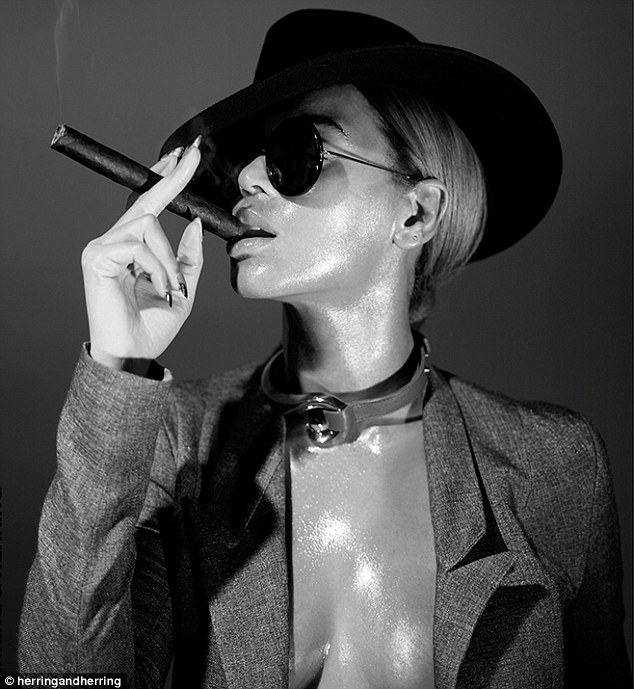 Smoking hot! Beyonce puffs on a cigar, sporting a black hat, sunglasses and collar in another image 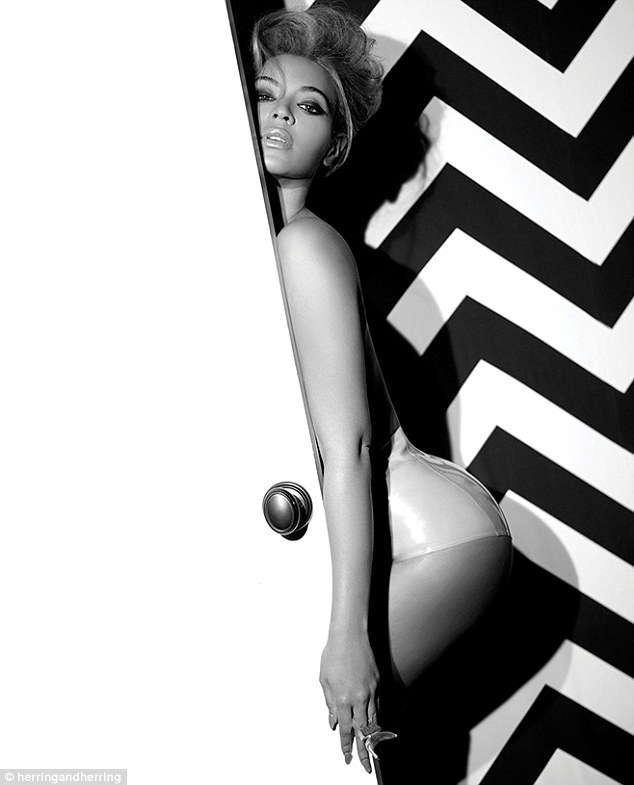 Bootylicious: Beyonce shows off her pert posterior to the maximum in what appears to be white panties as she pouts at the camera in one shot 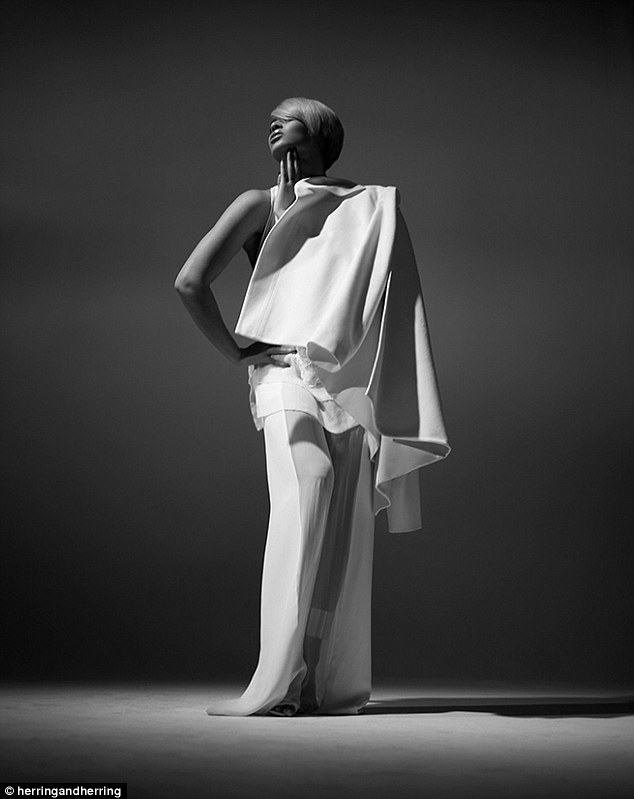 The white stuff: Beyonce sports a stylish cropped wig teamed with a one shouldered constructed gown

She looks almost unrecognisable in a cropped copper wig and a white draped one-shouldered dress with sheer panels.

The image will be used on the November page of the calendar, while a simple shot of Beyonce  sporting a sparkling choker necklace with poker straight hair and cat’s eye make-up is September.

While the majority of the calendar was shot in black and white, five of the photographs show her in colour. 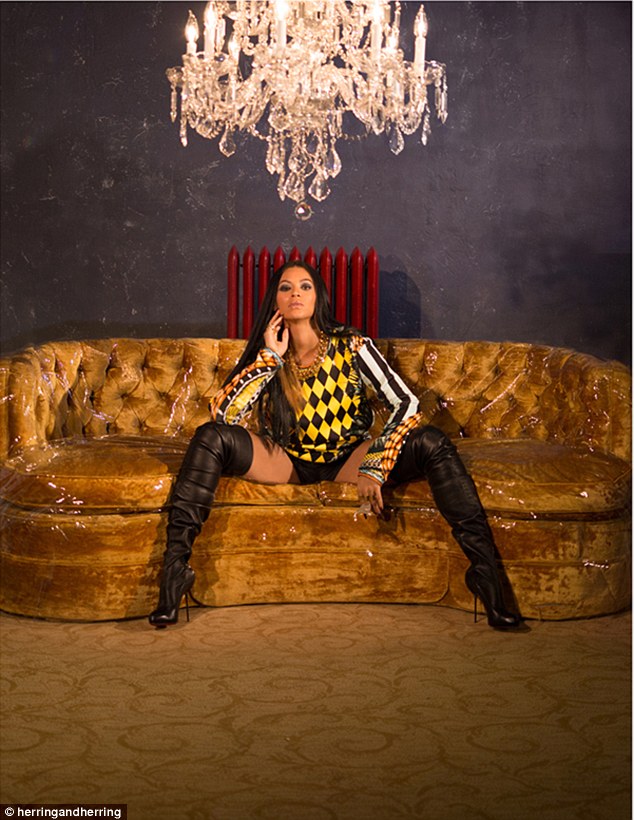 Sparking: The singer sports long dark hair, thigh high boots and a multi-coloured sweater, sitting on a couch  in another picture

In one striking image, Beyonce is seen sporting wrinkled thigh high boots and a multi-coloured sweater, with her hair a dark shade of brown hair worn loose over her shoulders.

And in a bonus feature, there will be 14, rather than 12 snapshots of the star and it is being touted as her first ever ‘official’ calender.

Herring & Herring, based in Brooklyn, is a collaboration between Dimitri Scheblanov (Russia/USA) and Jesper Carlsen (Denmark/USA), engaging in fashion photography and art direction. 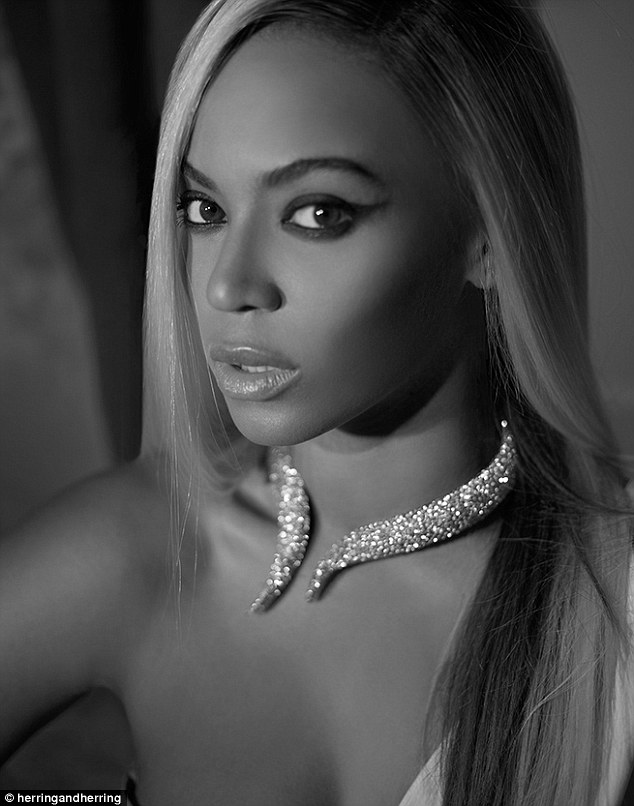