She is due to give birth any day now.

But Halle Berry showed no signs of slowing  down as she stepped out in style for dinner with husband Olivier Martinez on  Tuesday night.

The 46-year-old actress was helped out of the  couple’s car by the French  actor as they arrived at a restaurant in Beverly  Hills, California for a low-key meal. 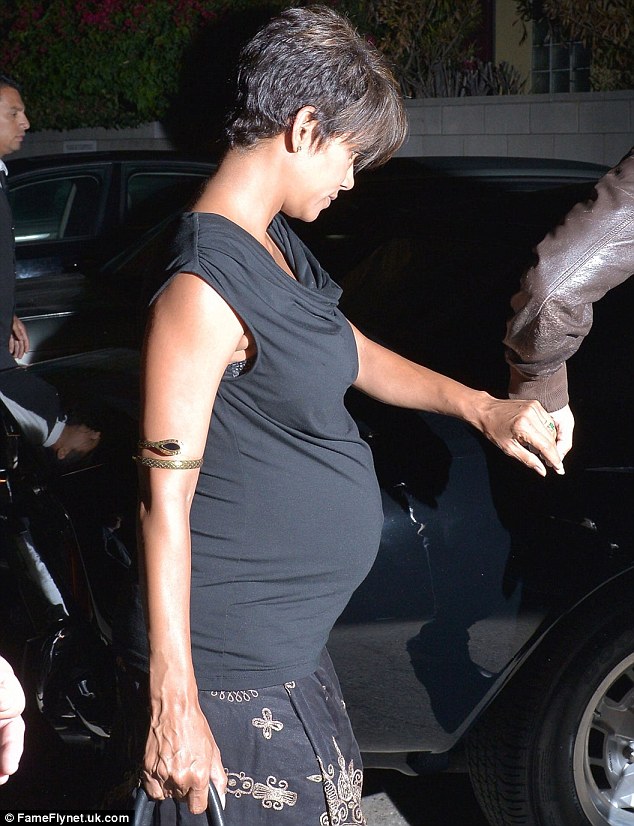 Any day now! Halle Berry looked blooming as she wore a  clinging black top while out for dinner with Olivier Martinez on Tuesday  night

Still glamorous: Halle teamed  the to with a pretty printed skirt featuring a thigh-high split for the night  out

The mother of five-year-old Nahla looked  simply stunning in a long black maxi skirt featuring an intricate  pattern and  was also slashed to thigh.

The Oscar-winning actress paired the attire  with a cowl neck top that displayed her prominent baby bump.

She accessorised with a gold armband just  above her right elbow, carried a large black purse and wore a pair of flat  sandals. 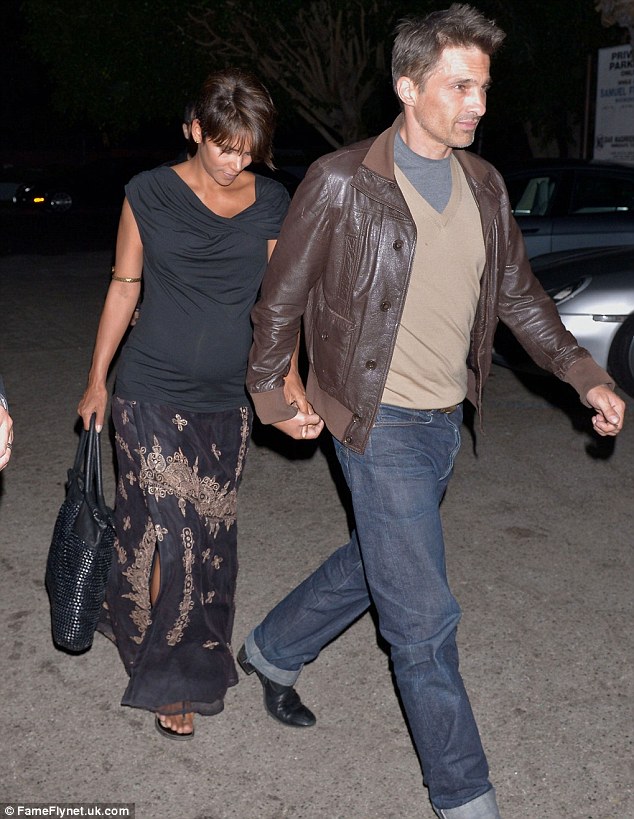 Keeping her close: Olivier kept a tight hold on his wife  as they arrived at the Acabar Restaurant in West Hollywood 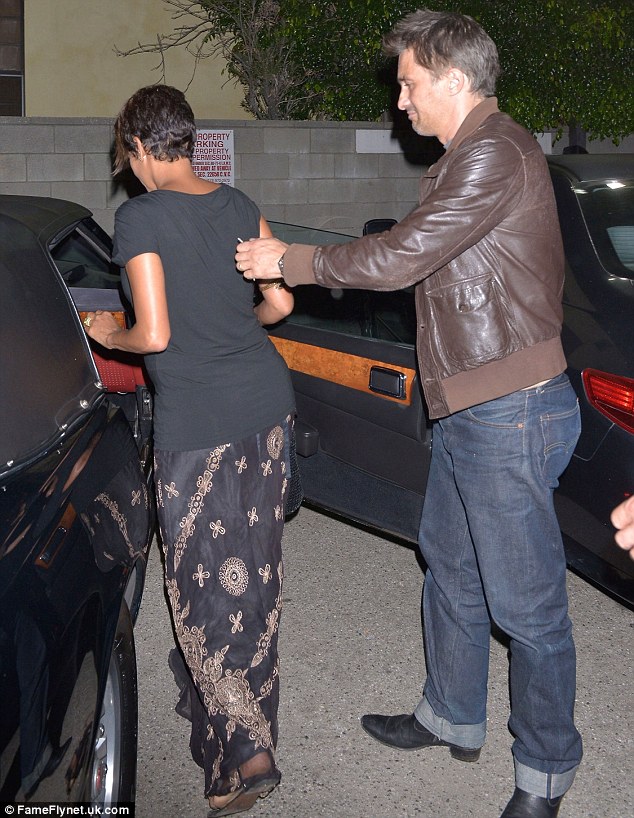 In you get: Olivier helped Halle get into the car after  the meal out 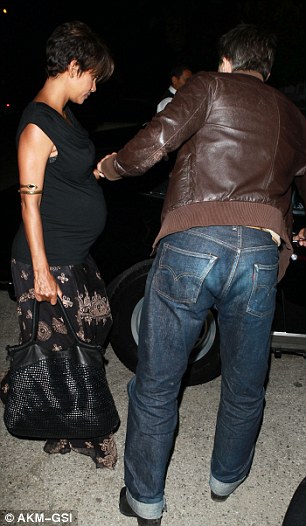 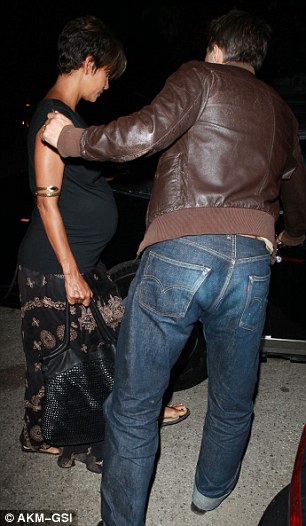 Chivalrous: Olivier ensured Halle was comfortable as she  got into the vehicle

Olivier, 47, who doted on his new wife, wore  a casual outfit consisting of cuffed blue jeans and brown leather  jacket.

Halle announced she was pregnant with her  second child in April and she’s expected to give birth in late  summer.

Olivier usually can be seen tending to Halle  and step-daughter Nahla, but he  enjoyed a little alone time earlier on Tuesday  at a vintage auto lot in  West Hollywood, California. 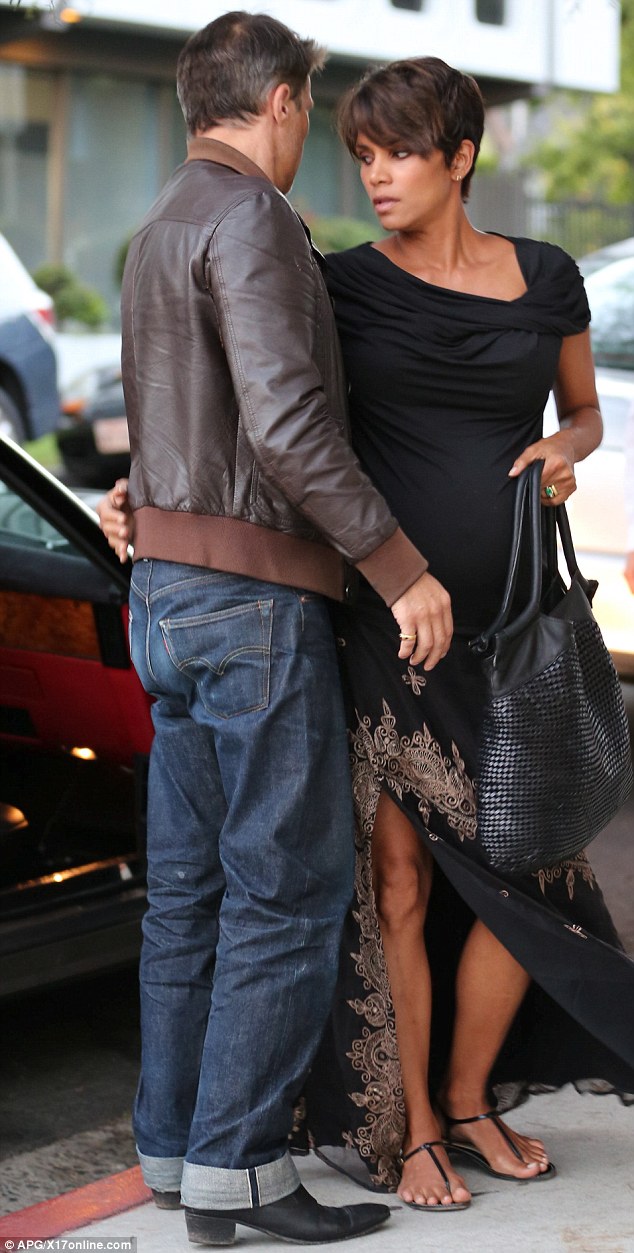 Helping hand: Olivier helped Halle get out of the car as  they grabbed a low-key dinner 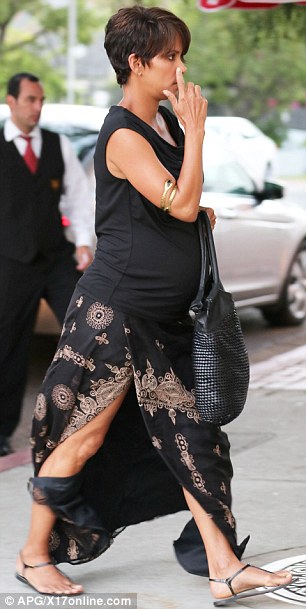 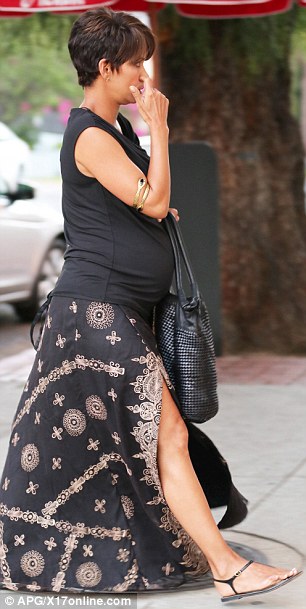 Halle and Olivier duly tied the knot on July  13 at the fairytale Chateau des Conde, in the Burgundy countryside around an  hour’s drive south of Paris.

The actress is already a parent to Nahla with  her former partner, model Gabriel Aubry. 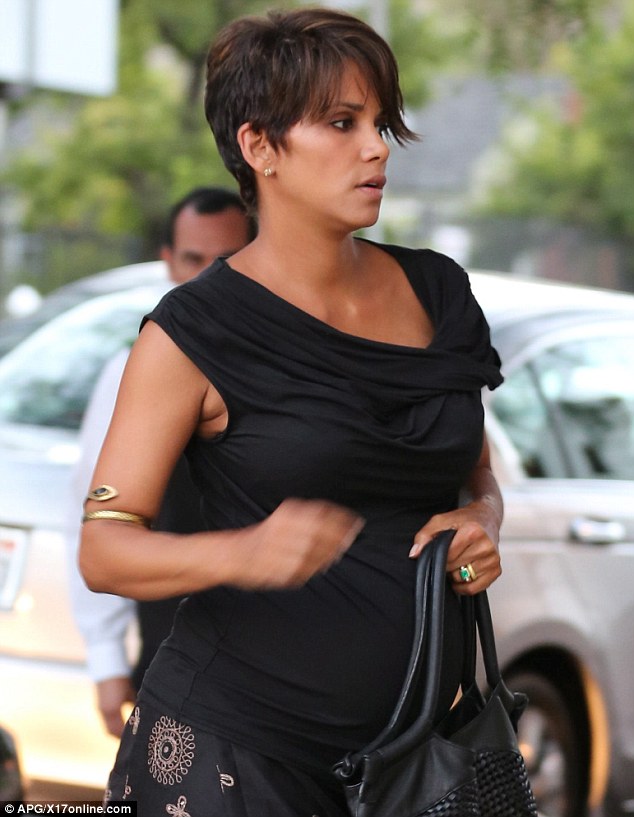 Hollywood beauty: Halle continued to look radiant as her  due date nears 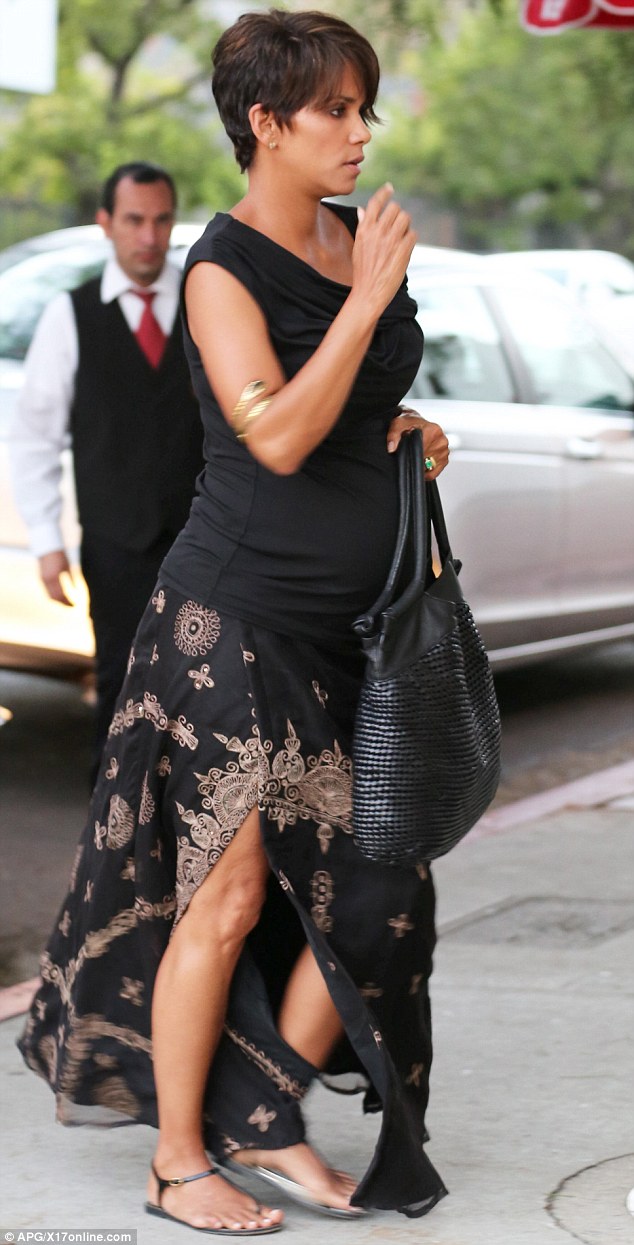 Flowing focus: Halle wore a billowy skirt and a  determined look to get into the restaurant 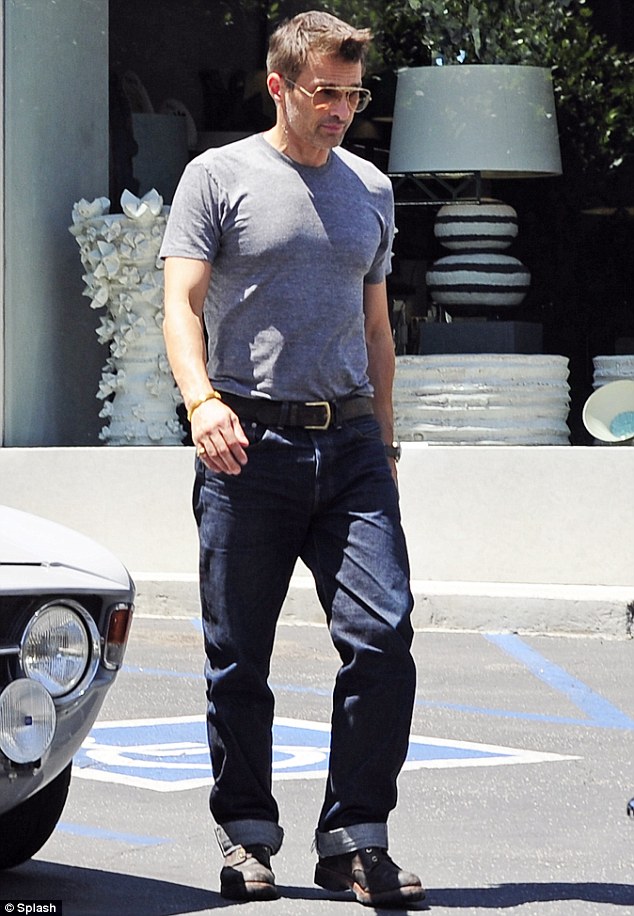 Keeping it classy: Olivier checked out classic cars on  Tuesday during a little alone time in West Hollywood, California 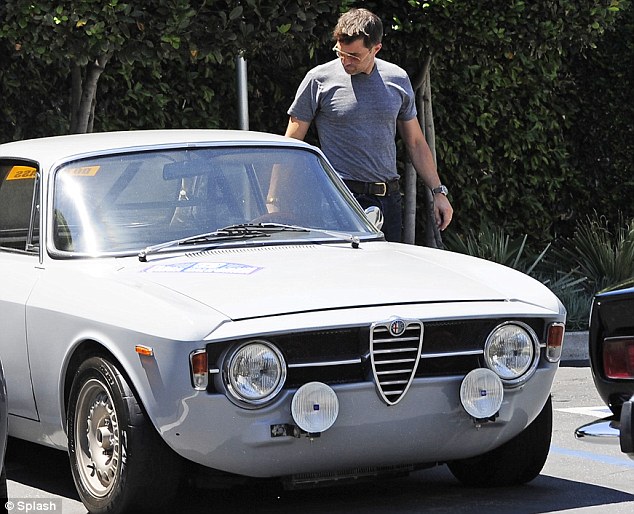 Nice wheels: Olivier got up close to a vintage Alfa  Romeo 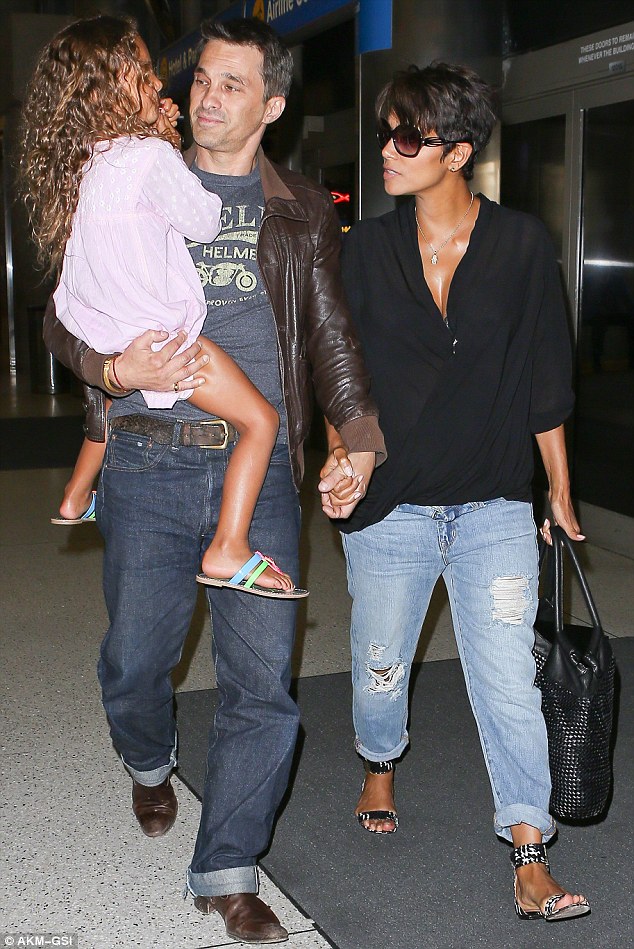 Baby on the way: Olivier, Halle and Nahla are shown  earlier this month at Los Angeles International Airport on their way to France  where the couple got married