Father and son get jailterm for raping children (PICTURED) 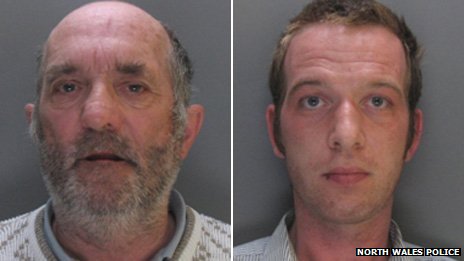 A father and son have been jailed for 18 and 10 years respectively for a series of rapes on children and women.

Ford – who had the longer sentence – and McKellar, both of Colwyn Bay, used their victims as “sexual objects”.

Sex attacks committed by Ford, who corrupted his son from a young age, dated back to the 1980s.

The prosecutions were brought last year after victims, many of them children and young people, complained to North Wales Police. Judge Rhys Rowlands praised their courage.

The court heard that Ford, originally from Wolverhampton, had previously worked as a representative for the cosmetic company Avon. He made his young victims wear make-up and perfume.

The judge said the offences were born out of Ford’s depravity.

“Fortunately, it is rare in the extreme for a court to have to deal with two men, a father and son, who between them have inflicted untold misery and anguish on others,” he said.

“Had your son had a normal upbringing, with a decent individual for a father who knew how to behave, then it may be that he would not be standing alongside you today,” he told Ford.

McKellar had “a truly dreadful start in life and was shown no sort of example by his father,” the judge said.

The court heard McKellar committed sex attacks as a child for which he could not be prosecuted. But he was prosecuted for rapes he went on to commit in his 20s.

The judge said the men had lived a lie. He said they outwardly gave the impression of being considerate and charitable men. In reality, they had sexually taken advantage of children and young and vulnerable women.

“They were assaulted, used as sexual objects,” the judge told them.

The judge said some of their victims had been very badly affected. One victim was driven to prostitution in order to pay for an abortion as a result of a rape.

Judge Rowlands told both defendants: “It is beyond the comprehension of right thinking people that anybody could behave in the way that you did towards these victims.”

There were a number of victims and the defendants’ behaviour had a profound and ongoing impact on them.

In sentencing the pair, the judge said he had to consider the harm caused already caused and the risk they posed for the future.

The court was told complaints about Ford had been made to police in the Midlands during the 1980s and 1990s but he was not prosecuted.

The judge said Ford believed he had got away with his crimes and went on to commit further offences.

‘Complex and damaging past’

Ford denied all charges but following two separate trials, he was convicted of seven charges of rape and six of indecent assault against others.

Wyn Lloyd Jones, prosecuting, said the victims were now adults who had the courage to come forward to give evidence about what happened to them when they were children.

Ford told them they were playing “big girls’ games”.

Andrew Green, defending McKellar, said his client would need specialist help to try and unravel a complex and damaging past. He had been psychologically damaged.

Det Con Paul Jones said after sentencing: “This has been a complex investigation which has involved several victims of all ages, living in different parts of the country.

“Ford, who was found guilty of these offences, has shown no remorse for his crimes, putting the victims and witnesses through the ordeal of a court trial.”