How Customs intercepted 56,750 rounds of ammunition in Oyo – DC Oteri 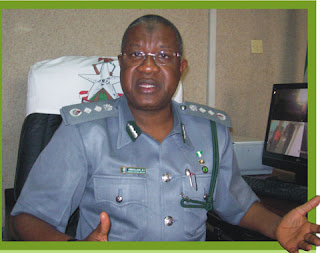 The seizure of 56,750 rounds of ammunition in Oyo/Osun Command of Nigeria Customs Service (NCS) has attracted attention to the Command.

In this interview with the Sunday Vanguard, the Customs Area Controller of the Command, DC Oteri Richard, speaks on the interception of the ammunition and recent operations in the Command.

To start with, I just took over  in the Command on 16 April, 2013. I came determined to vigorously build on the achievement of my predecessors. As such, I had series of meetings with patrol officers in the Command to re-strategise our operations by utilising best practices of modern day anti-smuggling techniques. This led to the achievement of unprecedented levels in suppression of smuggling as attested to by huge seizures and detentions made within one month of my assumption in the Command.

The seizure of the moment is 56,750 rounds of ammunition neatly packed in 227 cartons. The vehicle used as a means of conveyance was arrested along Igboho road within Saki axis by vigilant officers. The culprits concealed the ammunition in bags packed with dried cassava tubers like farm produce in a bid to escape security checks, but the timely intervention of officers thwarted  their craftiness.

Oyo/Osun is known to be a Command with low economic activities. What measures did you put in place to revive the Command?

The modern day Customs is intelligent-based and we are working tirelessly to reduce incidence of smuggling to the barest minimum, because the current management has provided us with the wherewithal to accomplish this task. For instance, we have our intelligence  network and trained officers positioned at strategic locations to block all loopholes within the Command.

Imagine the implications, if such large quantity of ammunition had gone into our economic environment, and perhaps into wrong hands! The interception of such dangerous weapons has prevented havoc on our economy. In the spirit of collaborative effort, we have handed over the items to the Nigeria Police in the state, to carry out a thorough investigation to unravel the culprits behind  the importation.  Also, the citizenry should collaborate with government to fight crime by volunteering  useful information to appropriate security units in the country.

I am using this medium to appeal to  community leaders to sensitise their wards on the dangers of smuggling, especially in the light of the serious security challenge in our country. I encourage all those who want to engage in legitimate foreign trade to come to us for inquiries or access the Customs website for import, export transit trade information.

Aside from the ammunition, what other uncommon trend of smuggling have you discovered in the Command?

We have uncovered various techniques. For instance, within just one month, we recorded seizures of 2,716 bags of rice, with Duty Paid Value (DPV) of over N30.7million concealed with charcoal in a long truck. Other seizures include 28 fairly used assorted cars and Jeeps with DPV of N21.3million, 2,500 cartons of frozen product with market value of N12.5milion, a lorry loaded with 700 cartons of foreign shoes, a bus loaded with prohibited textile materials, 521 used tyres concealed with 600 bags of animal feeds in a trailer and the DPV is put at over N2.2million.

Also, in the first quarter of 2013, a total of N4.6billion revenue has been generated, as against N3.9billion realised in the same period in 2012. This shows the difference of over N659. 7million, representing an increase of 17 percent. From January to April this year, a total of N50million was realised from duty collected on 494 vehicles, as against N25million collected on 338 vehicles for the same period in 2012.

In the past one month, a total of N22million was collected on 216 vehicles, which represents an increase of over 100 percent of the cumulative total from the first quarter of 2013. Also in 2013, a total of 86 seizures were made, comprising second-hand clothes, used vehicles, prohibited textile materials, used tyres and many others. The DPV is N400.6million, as against N49million realised within the same period in 2012.

Nigeria, is celebrating 14 years of un-interrupted democracy, what will you say are the achievements of Customs within this period?

Let me focus on the current management, the Service under the leadership of the Comptroller General of Customs, Alhaji Abdullahi Dikko Inde, has achieved harmony and understanding from the top to the bottom. Customs has been well reformed through intensive capacity building programmes for officers within and out side Nigeria.

The modern Customs is intelligent driven with vibrant and dynamic leadership. NCS now has world class training colleges adequately equipped to enhance effective transfer of skills to enhance productivity in the Service.  Dikko’s election as the Vice-President of World Customs Organisation was in recognition of his numerous achievements and uncommon transformation he brought to bear in the Service. For instance, Customs procedures now are e-processes, which further enhanced efficiency in the system to stimulate trade facilitation in line with global trend.