How large crocodile was found roaming in Omole Estate (PHOTO) 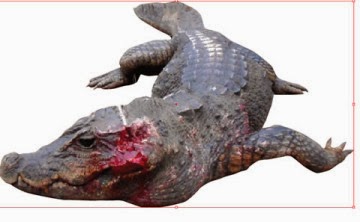 The residents of Omole Estate, an upscale neighbourhood on the Lagos Mainland, were recently thrown into shock by the sight of a wild animal within their gates.

The animal, which was described as being very large, was said to have been shot at thrice to no avail.

The reptile was eventually stopped after a continued onslaught by security officers within the estate.

The animal had earlier been caught by the estate’s security operatives around 2am on Omotunde Akinsola Street, by Today’s Car, after it strayed from a swampland at one end of the neighbourhood. Three bullets shot at the animal did not kill it.

So the initial buzz of excitement generated by the incident soon turned to apprehension for residents. Some of them described the crocodile which was over six feet long, as frightening.

A resident living by the swamp where the animal was caught, who identified herself as Ogechi, said she heard three gunshots that morning, and had thought they were meant to scare away robbers.

“Now, there is a general fear in the area caused by the incident. It’s amazing finding such a wild animal around where people are living; I think it’s very dangerous because a crocodile should not be going about in a neighbourhood,” she said.

“I heard three shots around 2am and I thought maybe there were robbers around. I didn’t know an animal was being shot.”

For Ogechi, however, her lifestyle was bound to change as a result of the incident. “I will be more watchful because of the incident and even stop going out in the night,” she added.

Another resident, Aanu Oladapo, feared that there were more dangerous animals where the suspected crocodile had come out from. Oladapo said he had heard stories that wild animals paraded around the swampy area in the estate, but had not believed until the recent incident.

“I’d heard that such animals sometimes come out from the swamp but I never believed until now. I saw the crocodile live myself and it was really too big to be roaming a residential neighbourhood,” he said with a measure of concern.

One of the security operatives, Abu Alli, said he shot the animal three times after being notified by his colleague, identified as Itoro.

Recounting the incident, Alli said, “My colleague sighted the crocodile moving inside a residence, but he didn’t have a gun. He managed to divert the animal’s movement into a drainage, where it got stuck because it was too big.

“So he came to call me and when I got there, I shot it three times. I’m sure that one of the bullets hit it in the head, but it didn’t die. We later tied a rope round its leg and drew it to the estate gate, where residents had a view of it in daylight. The incident happened at about 2am and by noon, someone bought it from us for N20,000. The animal was still alive when we sold it.”

However, Alli said he had been surprised by his newfound popularity status in the neighbourhood since the incident, adding that security personnel had to be more vigilant in future.

“It surprised me that everyone has been talking about the incident. But I don’t think we did anything wrong by shooting the crocodile because it could have wounded somebody. I’m glad it didn’t attack anyone, so what we did was justified.”