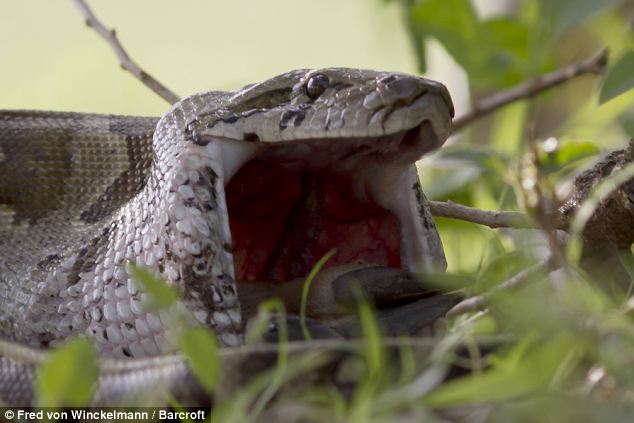 Snakes are one of the world’s most intriguing creatures, especially pythons and other super-sized ones.

The most astounding feature of these reptiles is their ability to swallow other animals whole.

This 8 foot African rock Python was spotted in the Moremi Game Reserve in Botswana swallowing an Impala whole!

The images were captured by photographer Fred von Winckelmann, from Eindhoven in the Netherlands, whilst on a game drive.

He said: ‘Seeing an African rock python swallowing a young impala is a once-in-a-lifetime sighting.’

He added: ‘The snake was calmly swallowing his meal without giving us any attention, so I was allowed to go belly-down to get eye-level photos of the reptile.

‘We arrived when the snake was starting to dislocate its jaws around the antelope’s waist and in 45 minutes it swallowed the last hooves.

‘That was when we let the python digest it in peace because they are so vulnerable when doing so.’ 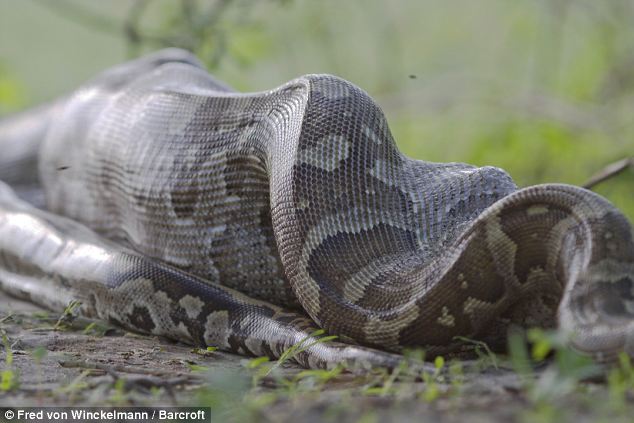 Food baby: The snake’s belly bulges from its massive meal in these pictures taken by a Dutch photographer 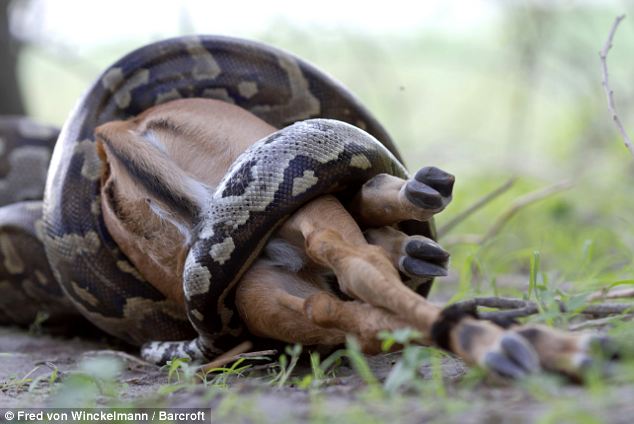 Constrictor: Pythons kill by wrapping their bodies around their prey and squeezing them until they suffocate 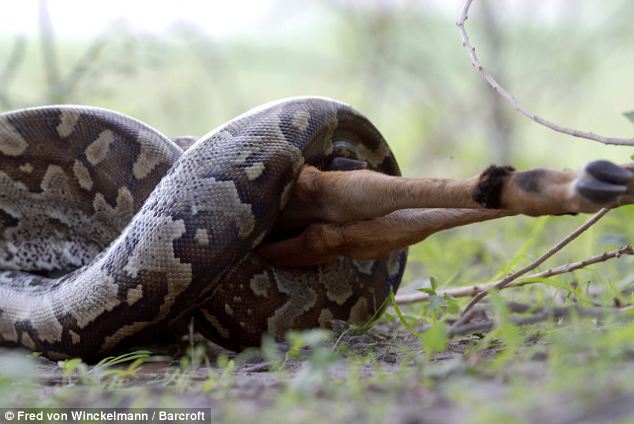 Crushed: The legs of the hapless impala stick out as the python slowly eats it up 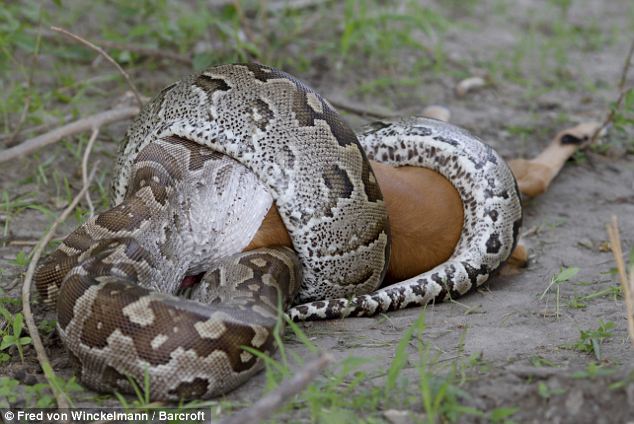 Savage: This picture shows just how wide the snake’s jaws had to open to swallow its massive meal 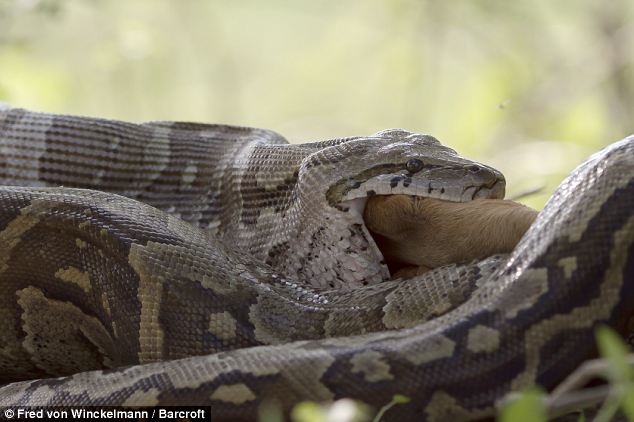 ‘Once-in-a-lifetime sighting’: The images were captured by photographer Fred von Winckelmann, from Eindhoven in the Netherlands, whilst on a game drive at Moremi National Park in Botswana 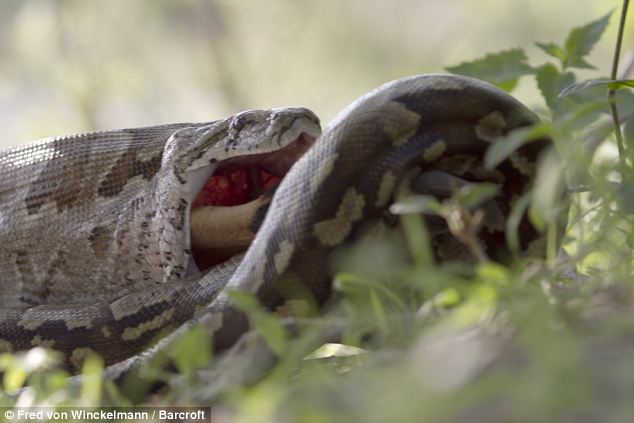 Preoccupied: The snake was so caught up in its meal that Mr Winckelmann was able to lie on his belly almost next to the beast to photograph it on its own level 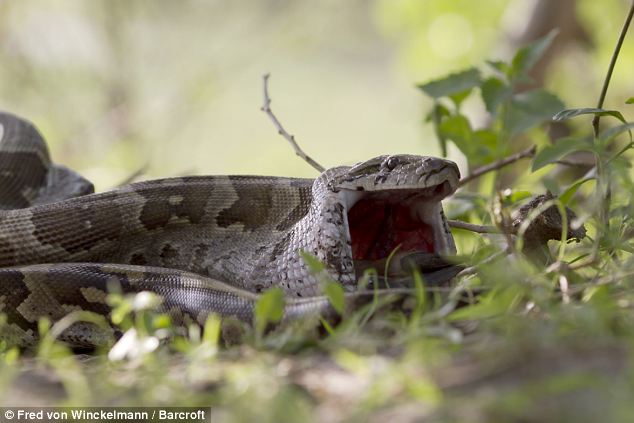 Down the hatch: The impala’s back legs disappear down the python’s gaping jaws and into its belly 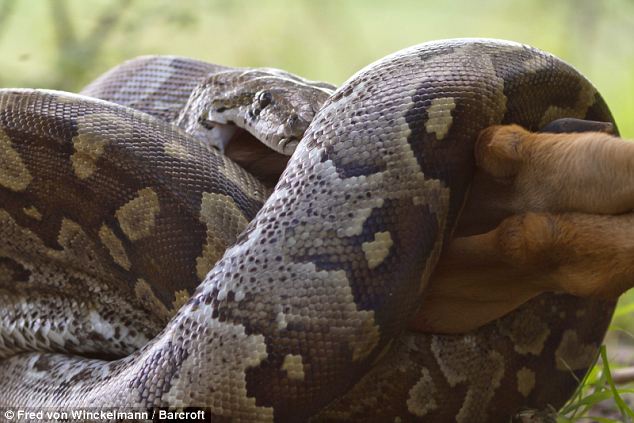 Savour the flavour: Mr Winckelmann said that it took the snake about 45 minutes to swallow its meal 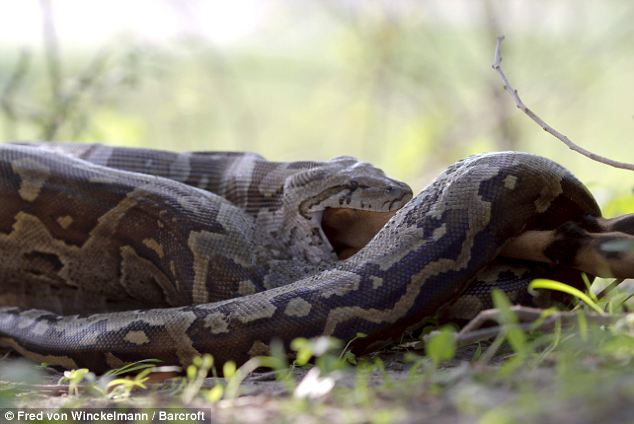 Powerful: While there are many predators in Africa able to bring down an impala, few could swallow it whole 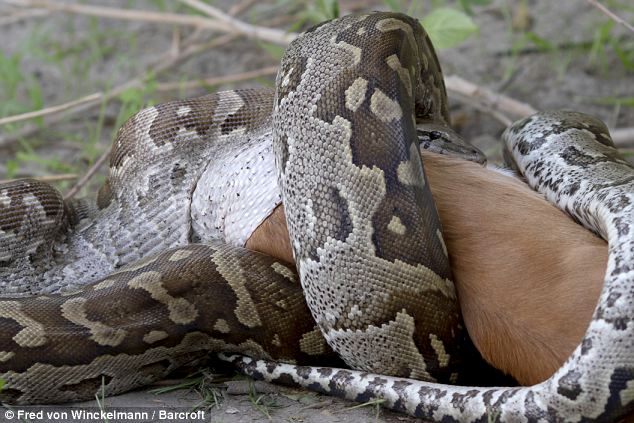 Stretchy: Pythons are able to swallow such large prey thanks to dislocatable jaws rigged with tendons, muscles and ligaments that can stretch to extraordinary lengths

Pythons are able to swallow such large prey thanks to dislocatable jaws rigged with tendons, muscles and ligaments that can stretch to extraordinary lengths.

They first kill their prey by wrapping their bodies around them and crushing them using powerful body muscles.