Pope Francis has acknowledged the existence of a ‘gay lobby’ inside the Vatican’s secretive administration for the first time.

Speaking during an audience with Latin American Catholics, the Argentine Pontiff said that there was a ‘current of corruption’ in the Roman Curia – the central governing body of the Catholic Church.

He also admitted the existence of a long-rumoured ‘gay lobby’ in the Curia, and hinted that he might take action over the issue. 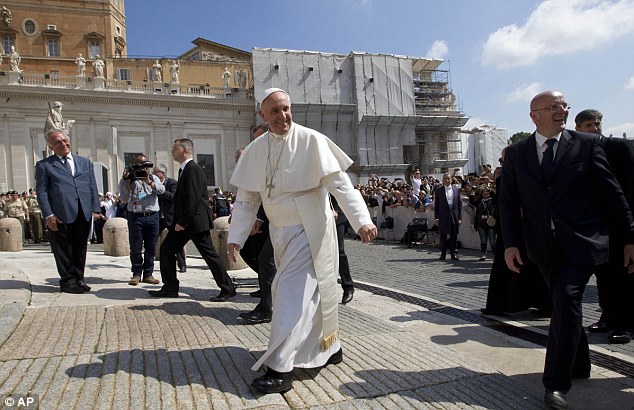 Speaking in his native Spanish last Thursday, the 76-year-old told the CLAR (the Latin American and Caribbean Confederation of Religious Men and Women): ‘In the Curia, there are truly some saints, but there is also a current of corruption.

‘There is talk of a ‘gay lobby’ and it’s true, it exists,’ he said, in a report on Chilean website Reflexion y Liberacion.  ‘We will have to see what we can do.’

The Argentine pope has made reforming the Roman Curia—the heavily criticised and intrigue-filled administration of the Catholic Church—a keystone of his papacy, but said it would be ‘difficult’.

‘I cannot carry out the reforms myself,’ he said, explaining that he was ‘very disorganised.’

For that reason, the task will be handled by a commission of eight cardinals from around the world whom Pope Francis appointed in April to help him govern the Catholic Church.

They are set to meet for the first time in October.

When the previous Pope, Benedict XVI, announced his decision to retire, many suspected the work of the rumoured gay lobby at the heart of the Curia.