Rocking it: Rihanna lets her hair down as she steps out in tight cigarette pants (PHOTOS)

She recently updated her look by adding some long hair extensions with a trendy shaved undercut.

But on Friday it wasn’t Rihanna’s fresh look that turned heads – all eyes were on her slim figure instead.

The singer looked super slender as she left a club in Hollywood in a pair of stylish tight cigarette pants. 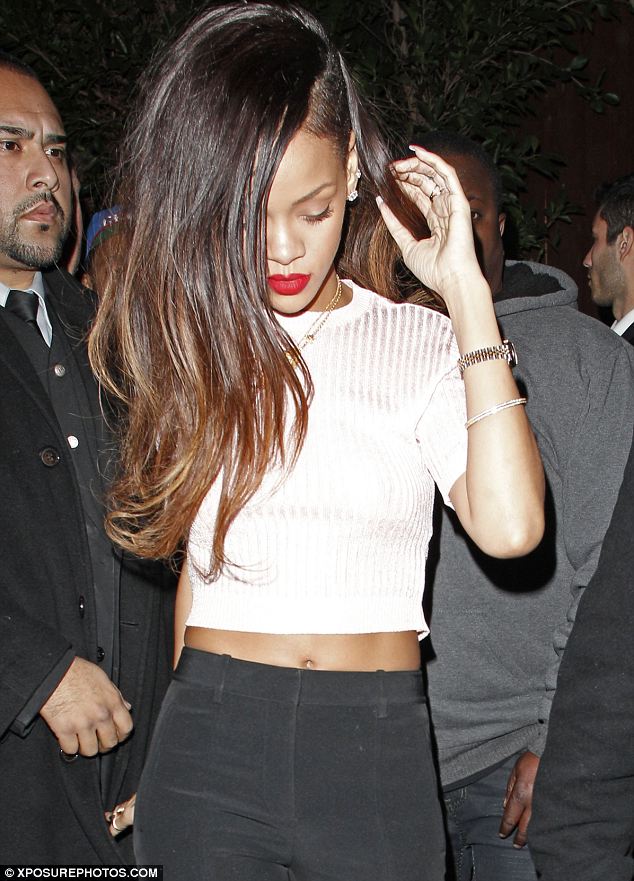 Looking great: Rihanna showed off her new hair and flat stomach as she went clubbing in Hollywood

Falling a bit above her belly button the top gave passers-by a glimpse of her flat and toned stomach.

On her feet she wore a pair of black sandals with straps around the ankle, which gave her look a dainty and feminine feel.

All in place? Rihanna was seen smoothing down her hair as she left the club perhaps feeling a little self-conscious about her new look 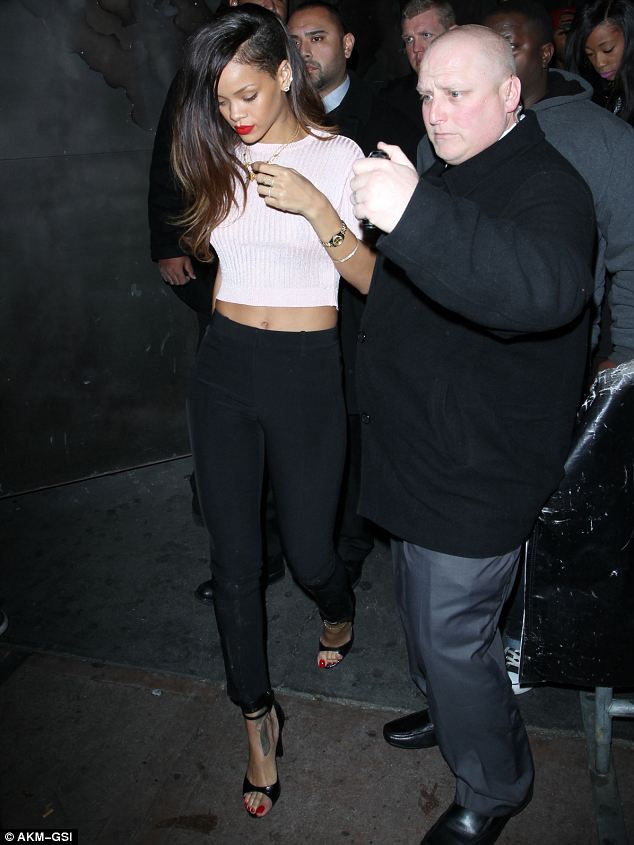 All eyes on her: As Rihanna left the club people began to notice there was superstar in their midst

Shaved: Even though she added hair extensions to her hair Rihanna kept her hair funky by shaving the side of it

Bringing her whole look together was her bright red lipstick which perfectly matched her toe nail colour.

The Diamonds singer looked a little self-conscious about her hair as she was seen smoothing it down as she left the club with a pal.

Meanwhile it has been confirmed that Rihanna is due to perform at the upcoming 55th Grammy Music Awards. 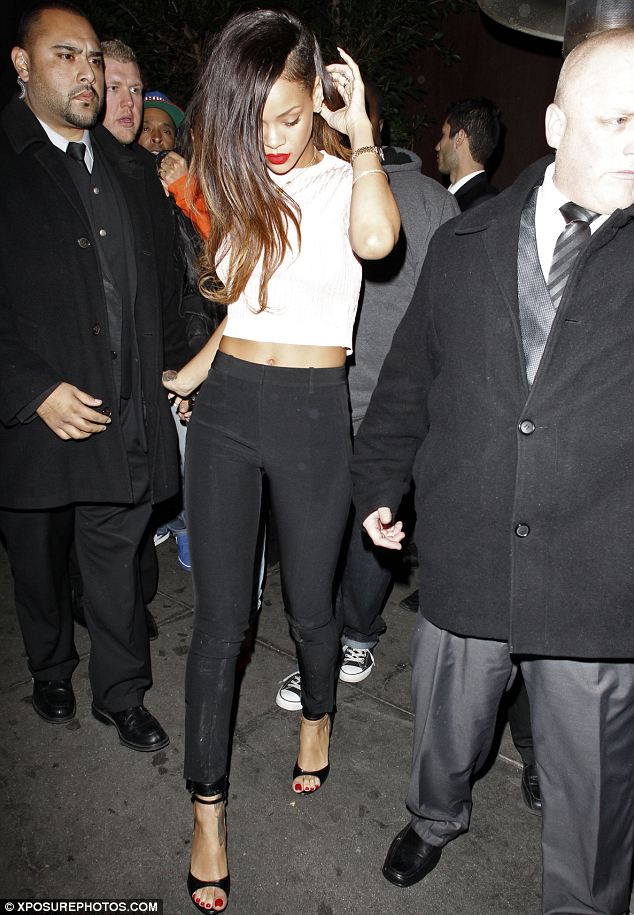 Monochrome: Rihanna wore a pair of black trousers with a white top for her night out, she added colour with red lipstick 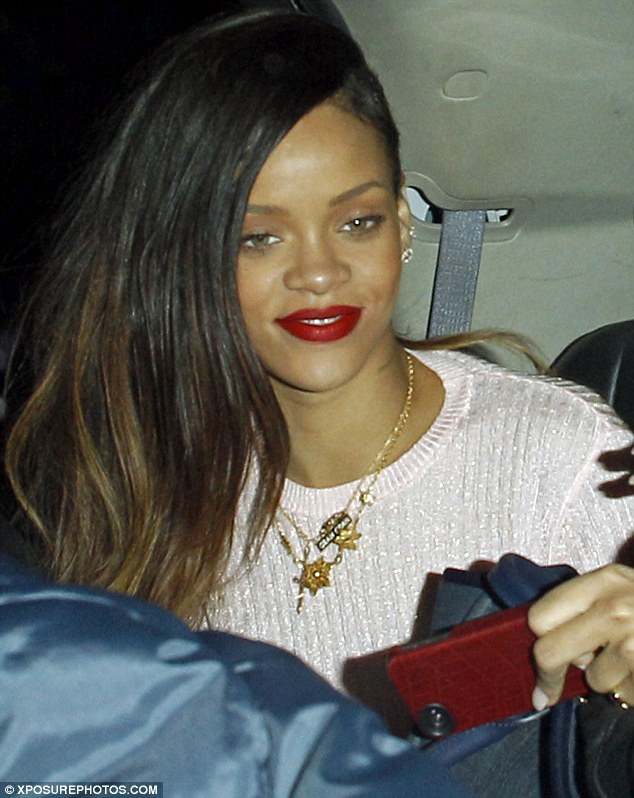 Smiley: Rihanna looked in a good mood as she left perhaps because it has been confirmed she is to perform at the Grammy Music Awards next month

She will be playing alongside a Mumford And Sons, Taylor Swift and The Black Keys at the ceremony which will be held on Sunday 10th February.

The singer’s current album Unapologetic missed the nomination deadline however her single Where Have You Been is up for best pop solo performance.

While she can probably look forward to success at the Grammy’s, her movie efforts haven’t been so well received. 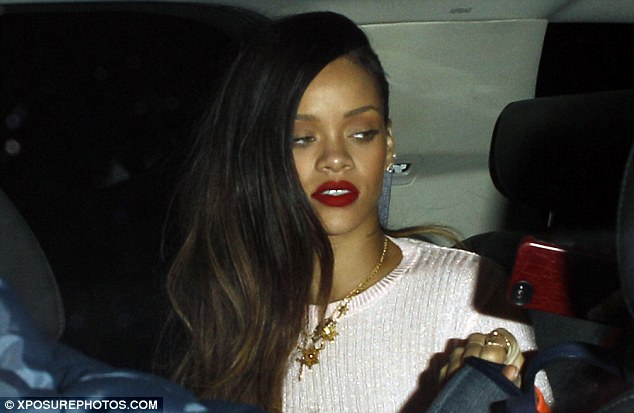 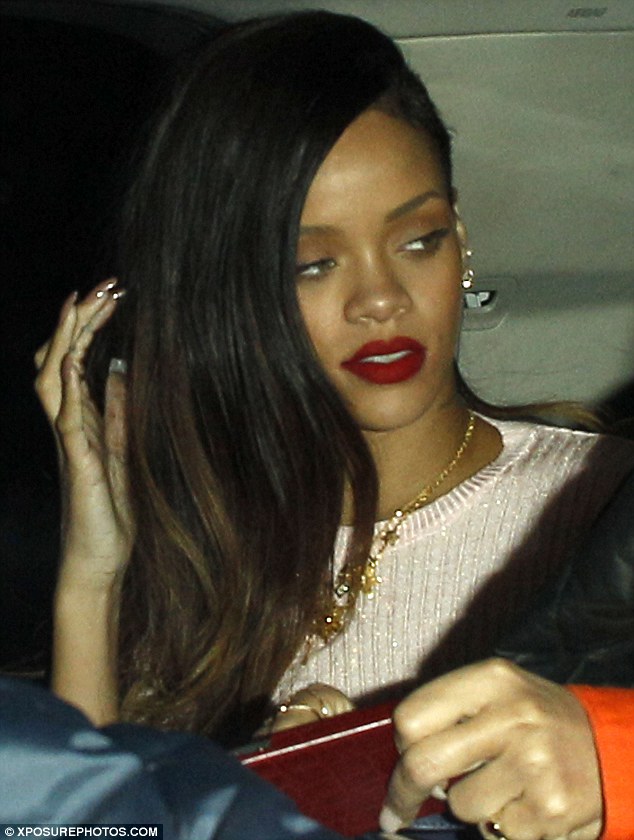 Razzie: While her music career is hugely successful her movie debut has been panned as it has been nominated for a Razzie

Battleship, which was the singer’s film debut, has been picked as one of the worst films of the year by the 33rd Annual Golden Raspberry Awards, known as the Razzies.

She has also been nominated for worst supporting actress.

Her relationship status is looking equally dire because despite the fact that she and Chris have been spotted looking more than just friends on a number of occasions in recent weeks, pictures which appeared on Twitter over the weekend showed that it was Karrueche who joined Chris at his clothing line launch in Long Beach on Saturday. 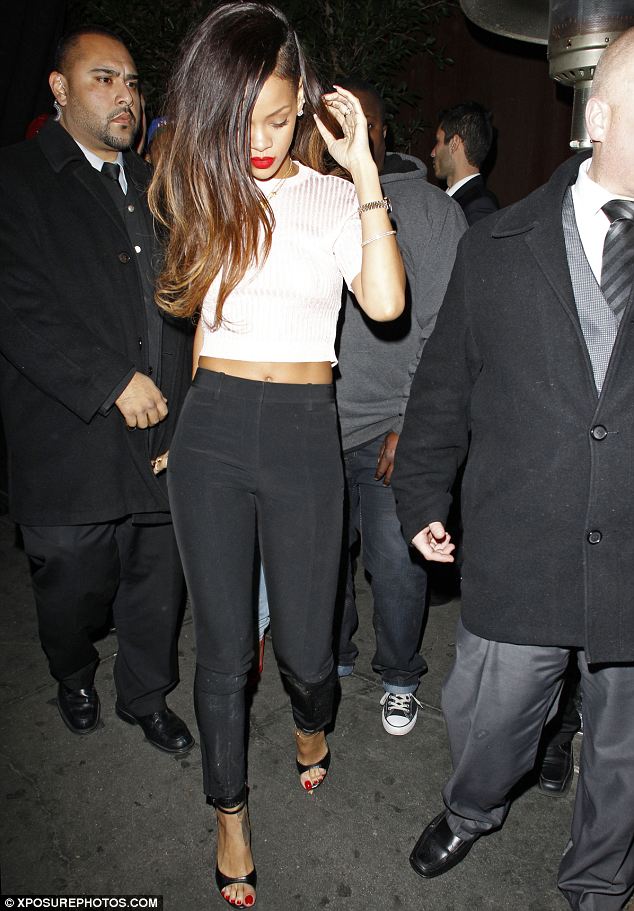 On or off? It is unclear whether Rihanna is back with Chris Brown or not however the pair haven’t been pictured together in over a week

Bomber: The singer wore a quilted bomber jacket to keep her warm and she carried a Chanel handbag 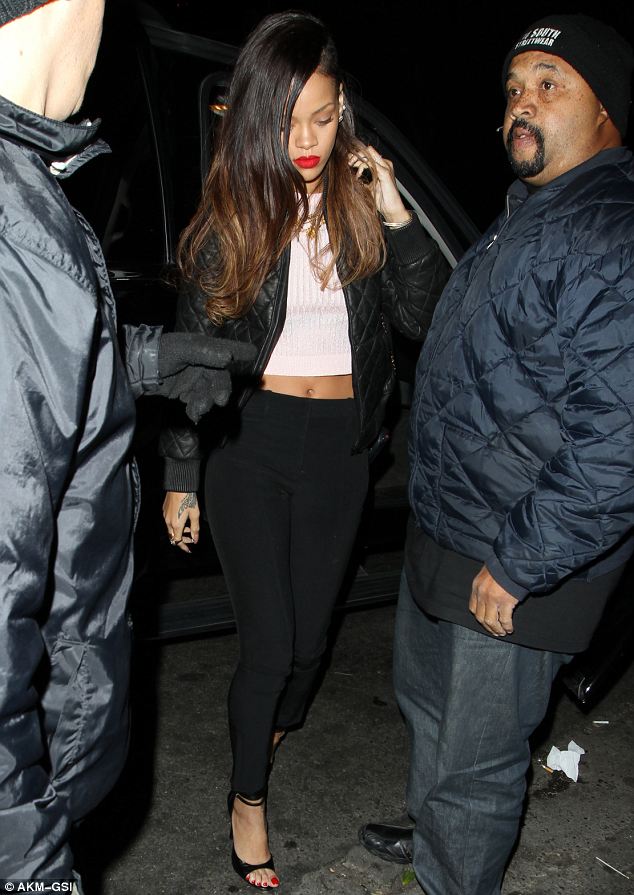 Head down: Rihanna tried to keep her head down as she made her way through people waiting to get into the club