Terrible: Teenager claims she ‘pays’ her father with sex to take part in school activities

A Utah father has been arrested and charged  with raping his own young daughter, who told police that he would demand sexual  favors in exchange for outings with friends and participation in school  activities.

The 46-year-old Brigham City resident, whose  name is being withheld by MailOnline to protect the identity of the alleged victim, was taken into custody last week and charged Wednesday with nine counts of rape and a single count of sodomy on a child.

According to his daughter, who is now 16  years old, the abuse first started when she was only 9 years old.

Over the past seven years, the teen told  police that her father, who also has two other children, raped her over 50  times, The Salt Lake  City Tribune reported.

The alleged victim explained that as she got  older, her father would have sex with her more frequently. Most recently, the  teen said that they would have encounters three to four times a week.

The horrific allegations came out when the  16-year-old told a friend at a church camp about the sexual abuse, asking her to keep it a secret.

The friend, however, shared the information with her parents, who then relayed it to their church bishop. The cleric, in  turn, reported the allegations to the Division of Child and Family Services.

During her interview with investigators, the unnamed teen said that whenever she wanted something or wanted to go out, she would have to ‘pay’ her father with sexual acts.

According to a police report, earlier this  month, the 46-year-old man forced his daughter to have intercourse with him four times in exchange for allowing her out-of-town best friend to visit. 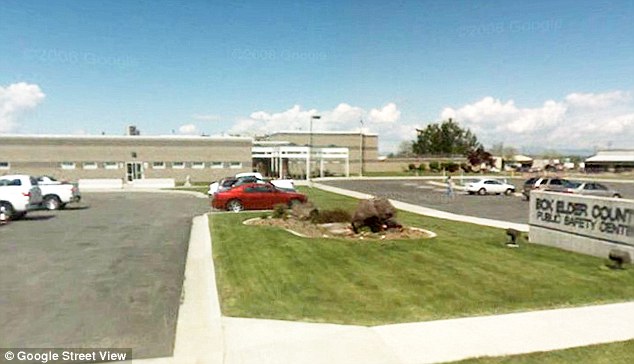 Behind bars: The suspected rapist is being held at the  Box Elder County Jail on $200,000 bail

When the friend left, the father told his  daughter ‘that it was time to pay up,’ the report stated.

The paper reported that after talking to  police officers about the alleged abuse committed by her father, the 16-year-old  made an emotional plea no to arrest him, saying that it would ‘tear her family  apart’ and hurt her siblings.

MailOnline has learned that the girl’s father  has an extensive criminal record including half-a-dozen arrests dating back to  1996 on a slew of charges ranging from disturbing the peace to assault and  battery.

Most recently, he was arrested in 2009 during  a traffic stop for speeding, driving without a license and allegedly being in  possession of a forged document.

Tags: 'pay' her father with sexual acts, rape, raping his own young daughter, rapist, sexual acts, sodomy on a child

Who would have thought that the next big show runner on Youtube would be Damilola Mike Bamiloye, son of veteran ...

From the moment it was confirmed that indeed, contrary to rumours and false information, Nigerians were indeed susceptible to the ...

Twitter was ablaze today following the birthday praise from RCCG’s General Overseer, Pastor Adeboye over his wife, who turned 72. ...