Wasted: Drunken cricket star attempts to open aircraft cabin door at 35,000ft as he looked for the toilet

A drunken Sri Lankan cricketer caused panic on  a packed British Airways passenger flight when he tried to open the cabin door  at 35,000ft.

In his stupor he tugged away for up to two  minutes at the exterior door before telling BA cabin crew on board the packed  Boeing 777 that he had mistaken it for the toilet.

The incident alarmed eye-witnesses among the  229 passengers on board flight BA 2158 as the Sri Lankan cricket team flew back  high over the Atlantic ocean from St Lucia to London Gatwick after playing  against the West Indies in the Tri Nations Tour. 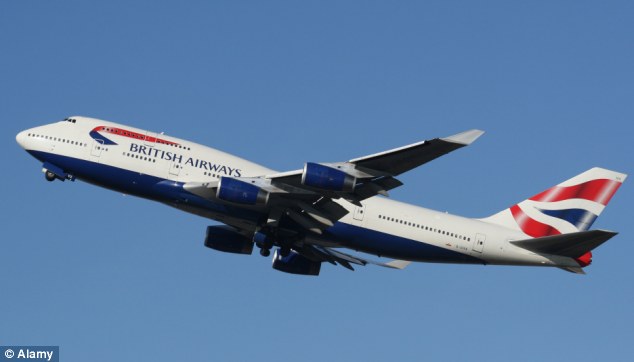 Wrong door: A member of the Sri Lankan cricket team  tried to open the cabin door on the British Airways flight from St Lucia to  Gatwick while the plane was at 35,000ft

The team had boarded in Grenada for the  overnight flight which stopped over in St Lucia before landing at Gatwick just  before 8am Monday.

Witness Charlene Francis, 26, from Willesden  in London was just feet away from the unfolding drama with her one year-old  daughter ‘TJ’, her mother Linda and sleeping brother Kevin, when the incident  happened in economy class about six hours into an eight hour flight from St  Lucia to London’s Gatwick Airport.

The recruitment consultant who is on  maternity leave said: ‘It was pretty frightening. I’m a nervous flyer anyway but  things had been fine until then. I was awake. My daughter had been crying. So I  saw everything.’

She said the man wrestling with the door was  among a group of cricket players wearing the blue Sri Lankan polo-shirt team  uniform with their country’s name in yellow lettering.

‘Suddenly he came over and tried to open the  cabin door several times. It went on for a few minutes. He was pulling quite  heavily.’ 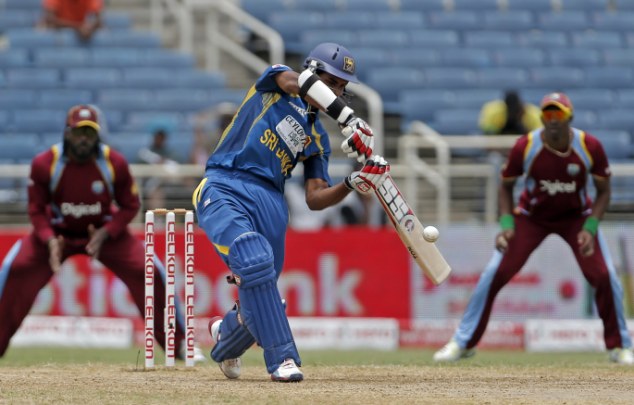 The Sri Lanka cricket team was flying to London after  playing against the West Indies in the Tri Nations Tour, pictured is Sri Lanka’s  Lahiru Thirimanne, last Friday

‘The BA flight attendants came running down  the aisle and tried to calm him down. He seemed quite disoriented. At one stage  he was leaning against my daughters cot.’

She heard the man tell cabin crew that he had  been looking for the toilet – an account confirmed by BA.

Mrs Francis said: ‘It was very scary. He  looked very dazed or drunk. He was very tall and wearing black and red ‘Dre’  headphones.

‘He had a blue polo shirt and the team logo  along with his team-mates.

‘Some of his team-mates were shouting and  telling him to stop. I was just a few feet away. My mum was really upset. Thank  goodness he was stopped.

‘Somebody said they had been drinking for  four hours before they got on the plane.’

BA said: ‘During the flight a man got up and  tried to go to the toilet.

‘But instead of going to the toilet he tried  to open the aircraft door in mid-flight.

‘The event was linked to “an element of  alcohol”. He explained his mistake and cabin crew accepted it in good faith.  Cabin crew reassured customers who witnessed the event.’ 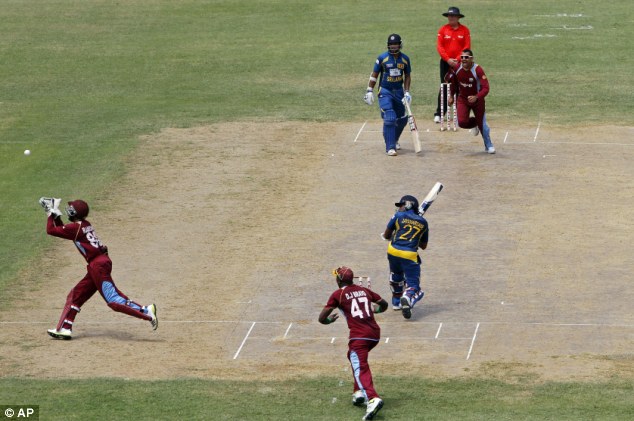 The player, who has not been identified, was intoxicated  on he flight back from the game, pictured, and thought the cabin door was the  bathroom

BA stressed that it is impossible to open the  pressurised door in mid-flight and that at no point was the safety of passengers  compromised.

Security were informed on the ground but  police were not called or involved.

After leaving the BA flight at Gatwick, the  player and his team mates subsequently boarded another plane belonging to  another airline taking them on to Sri Lanka.

Officials confirmed witness accounts that the  man at the centre of the drunken escapade was a Sri Lankan cricketer but  declined to name him.

A British Airways spokesman said:’ There was  a minor incident onboard the BA2158 service from St Lucia to Gatwick involving a  customer who we believe had been drinking’

He added: ‘It is impossible to open an  aircraft door when it is at high altitude and at no point was the aircraft in  any danger.

‘Our cabin crew are highly trained to deal  with such incidents and offered re-assurance to customers who were sitting near  to the door.’