Wizkid is allegedly in a mess.

Apparently, the pop star was paid to perform at an event -Safari night 3- organised by a certain Humble Entertainment in Leicester, UK on Thursday, May 26 2015.

However, according to the organisers, he didn’t show up.

A statement issued by the company, said, “despite going through all the necessary requirements to book Wizkid which included signing a contract and paying the required fee, we have been let down by the booking/management parties.”

See below, a copy of the letter: 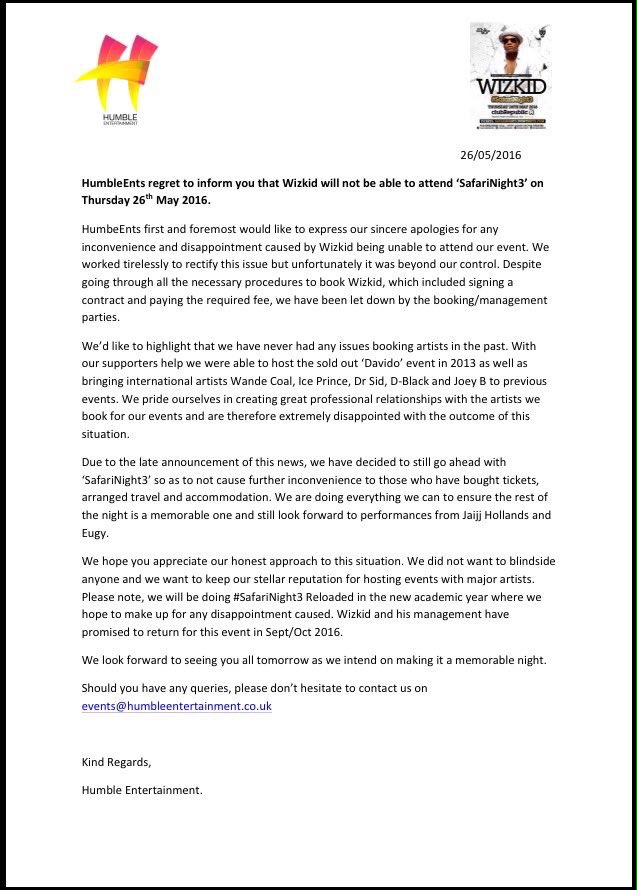 Although Disturbing London deals with his international bookings, Wizkid’s Nigerian management led by Sunday Are has feigned ignorance of the Safari Nights 3 gig which in the past has been attended by A-list artistes such as Davido, Wande Coal, Ice Prince and so on.

The head of List Entertainment, Sunday Are revealed this in a series of tweets.

@Lilkankz please always get your facts right. I don't know about this. Nobody discussed this with me https://t.co/lPjKX5Mbfe

Ok thank you. Just to clear myself once again. I don't anything about that booking. https://t.co/CO97KMU0tP