Wrapped in white: Adele snuggles her baby son to her chest as she arrives airport, fiance in tow (PHOTOS)

She’s devoted herself to being a mother since the birth of her son in October.

And even as she prepares to make her big comeback, Adele is keeping her three-month-old baby close.

The Oscar-nominated singer jetted into Los Angeles on Thursday night ahead of her performance at the Golden Globes Awards on Sunday – her first time on stage in months. 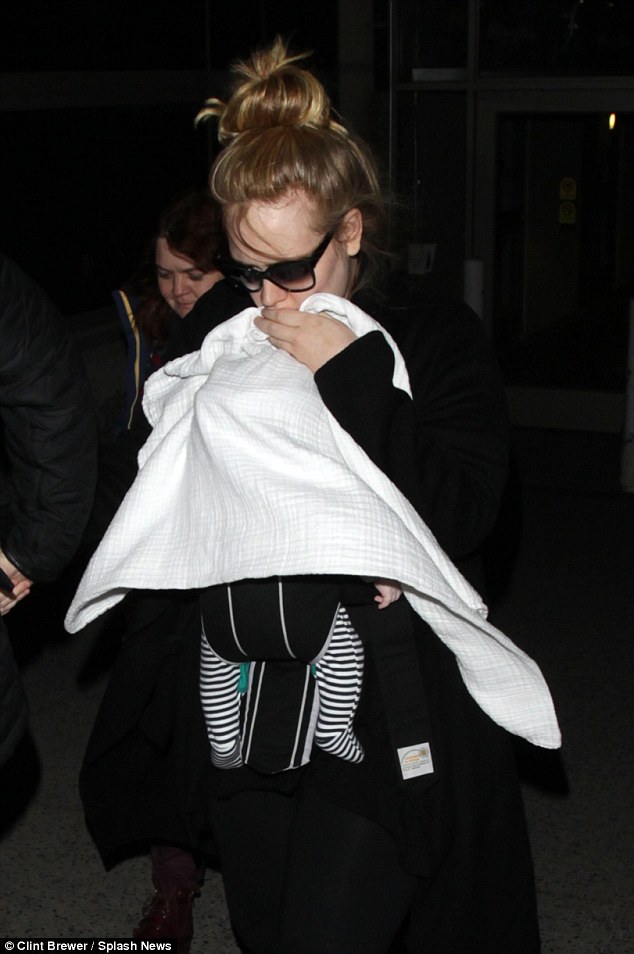 Precious cargo: Adele flew into Los Angeles on Thursday night with her young son ahead of her performance at the Golden Globes AwardsThe protective mother clutched her young son to her chest, covering him with a blanket to keep him warm against California’s freakishly cold weather as she made a dash to a waiting car.

Adele has yet to make her son’s name public and may be too late if she has missed the 42-day legal deadline.

The singer, who gave birth 51 days ago has reportedly not made an appointment to register her son and could now face a £1000 fine. 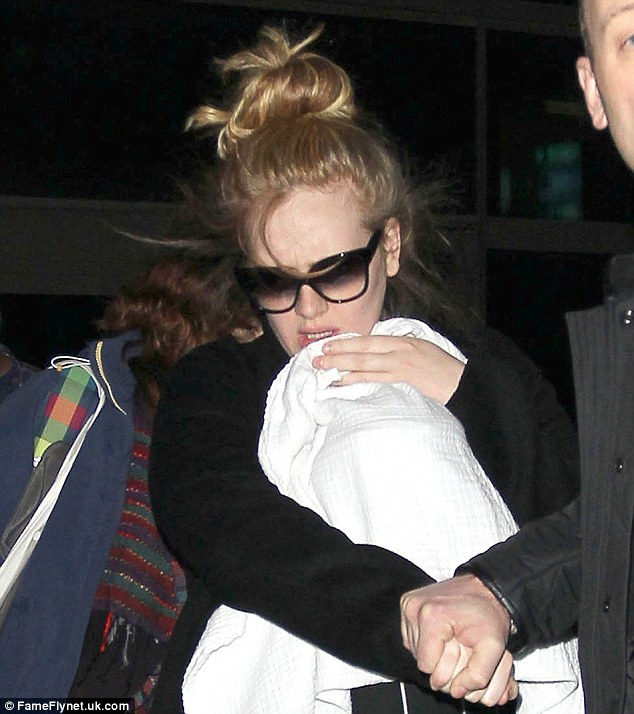 Solo: Not with the Rolling In The Deep singer when she flew into LAX was her 38-year-old fiance Simon Konecki

A source told the Sun newspaper: ‘Cops are hardly going to be banging on their door tomorrow and it’s probably just an oversight on their part.

‘Most parents register their baby within a couple of weeks because it’s a nice thing to do – and because there’s a maximum fine of £1,000 if they don’t.

‘There’s loads of reasons why parents are late and millions of couples don’t bother for ages.’

Adele and fiance Simon Konecki will begin to receive warning letters in the upcoming weeks if they do not register a name and the registrar can become liable and fined if they fail to do so within three months. 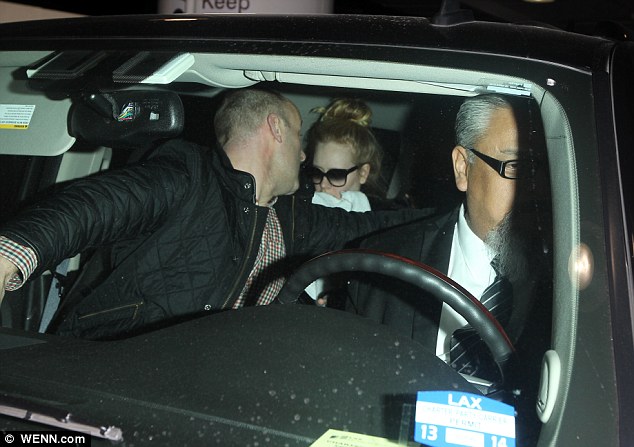 Step on it: The singer has avoided appearing publicly since she gave birth

For her flight to LAX, the singer dressed for comfort wearing black leggings, a black top and a three-quarter length cardigan.

The young mum tied her red hair up into a large bun atop her head and wore dark sunglasses so required help from her bodyguard to the waiting car.

The singer’s baby – who was born in October – was dressed in a black and white striped onesie.

The 24-year-old is in Los Angeles to perform the song she penned for the latest James Bond installment, Skyfall, at Sunday’s Globes. 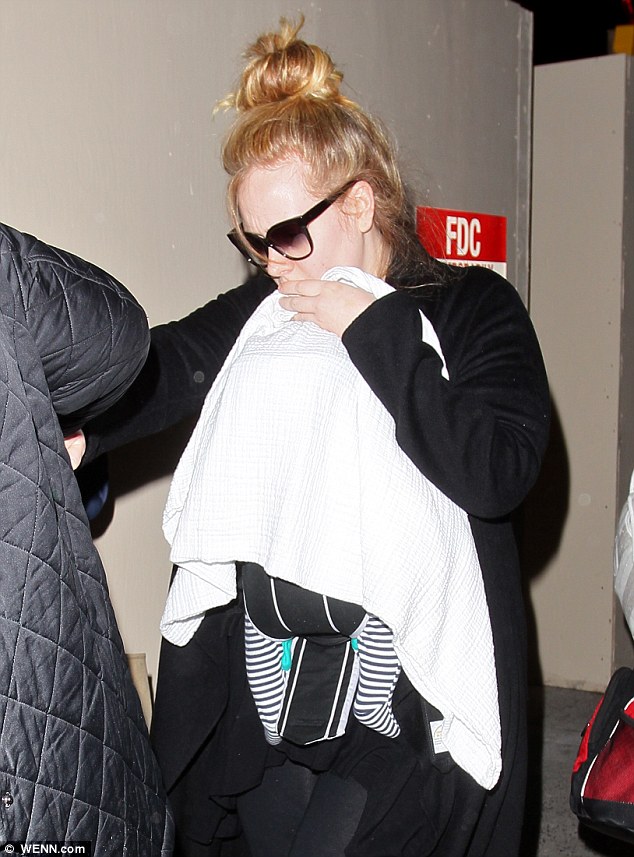 Casual mumma: The 24-year-old dressed for comfort for her flight from England 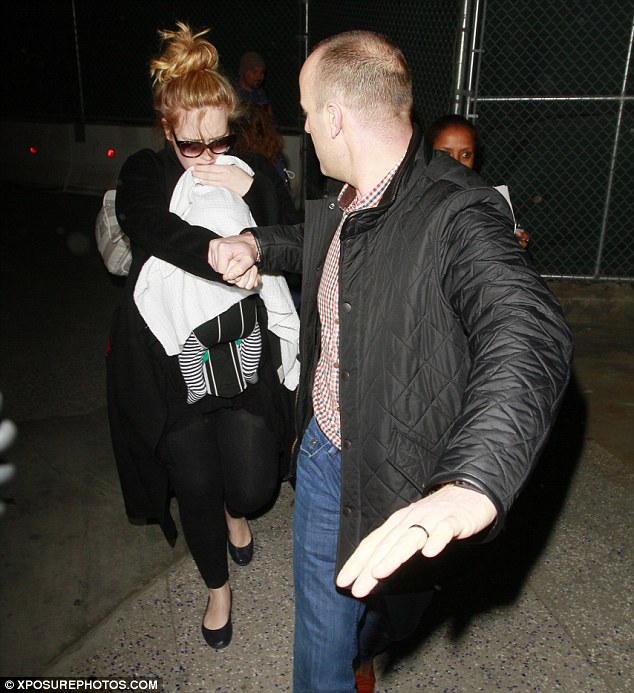 Helping hand: A security guard guides a sunglass-clad Adele to her car

Protective mum: Adele held her son close as she made her way through the airport, ensuring he was covered with a blanket 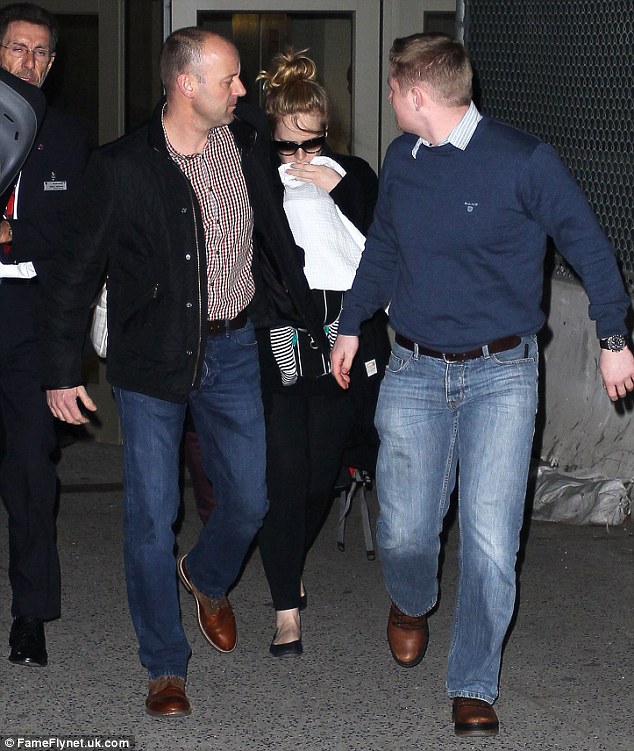 Keeping him safe: She was flanked by security guards as she made her way into Los Angeles with her baby son in her arms

Her first post-baby appearance comes as she was nominated for an Oscar on Thursday for the song that she both co-wrote and sang.

Following the announcement Adele immediately tweeted her delight: ‘Oh my god I feel like Meryl Streep!! Thank you.’

She is now being tipped to perform at the Oscars ceremony in Los Angeles on February 24. 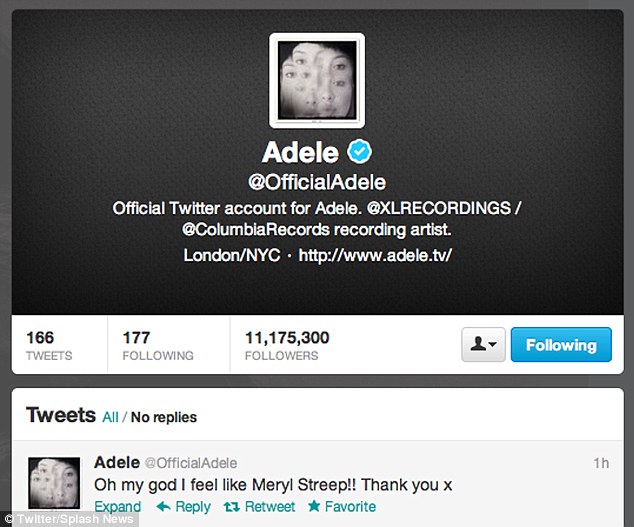 You love me! The Rolling With The Deep singer immediately tweeted her excitement upon hearing the Skyfall was nominated for an Oscar

Despite keeping a low profile since The Grammy Awards back in February it is set to be a big few months for the singer.

All eyes will be on her at the Academy Awards while Skyfall has taken more than a billion dollars globally her song as well cinematography and sound are Skyfall’s only hopes of recognition in an otherwise comprehensive snub for 007.

Adele’s Skyfall song will go up against Taylor Swift‘s hit song Safe and Sound from The Hunger Games, Jon Bon Jovi‘s track Not Running Anymore from Stand Up Guys, Keith Urban‘s single For You from Act of Valor and Suddenly from Les Miserables. 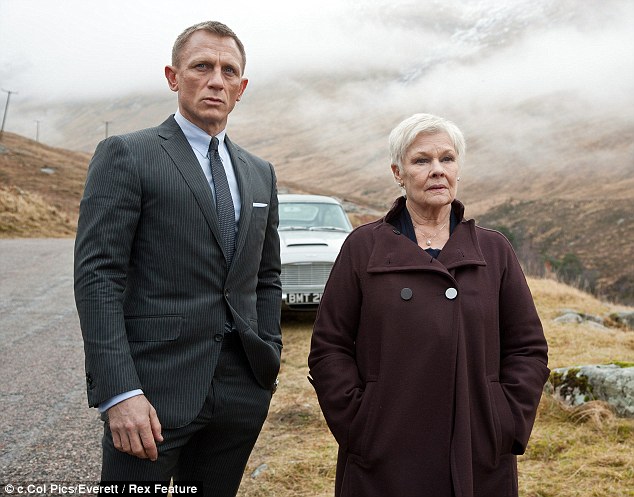 Adele saves the day: Despite earning a billion dollars at the box office Skyfall was largely snubbed by the Academy