Three Nigerians who are members of an  international prostitution ring smuggled a 23-year-old Nigerian woman into the UK to work as a sex slave after forcing her to swear using fetish means locally known as ‘juju’.

The gang, Florence Obadiaru, Johnson Olayinka and Olusoji Oluwafemi were said to have conned the woman into flying to Heathrow Airport on a bogus passport with the promise of education, a job and a new home.

But before leaving Nigeria, she was raped and forced to go through a black magic ‘juju’ death ritual to prevent her running away.

But when the woman arrived in London, her employment failed to materialise. Instead, she was told she was destined to work as a sex slave in Italy, a court heard.

The plan was only thwarted when Italian authorities spotted her forged ID and sent her back to the UK.

It is believed the woman is just one of many victims of the group, based in Africa, that trafficks young women through England to work as prostitutes in mainland Europe.

Olusoji Oluwafemi, 44, Johnson Olayinka, 45, and Florence Obadiaru, 48, were convicted of trafficking the woman into the UK for sexual exploitation and arranging for her transfer to Italy.

Oluwafemi and Olayinka were also found guilty of conspiring to get the woman a false passport.

Oluwatosin Osoba, 48, was acquitted of the same charge following a trial at the Old Bailey.

Judge Rebecca Poulet said custody is inevitable and sentence was adjourned until July 11.

The victim, who only spoke a little English, had been recruited by a Nigerian local called Beneditta in her home village near Benin City.

Her family had struggled financially since the death of her father in 2008, but she aspired to become a nurse.

In February 2011, Beneditta offered to help the young woman by sending her to England to be educated properly and get a job, the court heard.


She was told the cost would be £40,000 – which she would have to repay to the organisers.


Prosecutor Christopher Ames told the court: ‘She had no idea at all what £40,000 was in her own currency, her life had been very hard after her father died, and she jumped at the chance to be educated and be trained for a job, and get away from the desperation and misery of her current family situation.

‘She was very excited, a naive young girl, at the prospect of going abroad.’

She was sent to the Nigerian capital of Lagos on March 23, 2011, to meet a man called Felis who made her a false passport and coached her in getting through UK immigration.

‘While he was doing that, he began to sexually assault her’, said Mr Ames.

‘That led him to beat her with a belt and that in turn led to him raping her that night.’

When she complained to Beneditta the next morning, she was told: ‘It was what you should have expected’.

She was then told to pose for photos with a man who would pretend to be her husband.

In September 2011 she was summoned to the west African country of Benin to get a visa.

The woman was then told to swear an oath to repay the money in a ceremony that involved cutting her armpit and pubic hair and taking finger nail clippings.

‘The oath she was solemnly required to take was to repay that money, £40,000, on pain of death if she did not,’ said Mr Ames.

‘This was what was known as a juju ceremony.’

She was driven to Lagos on September 12, 2011 and put on a plane to the UK, meeting Olayinka at Heathrow Airport.

Olayinka, calling himself ‘Mike’, checked her into the Marbella Hotel in Peckham, south London, and took away her money and passport.

She was next taken to the house of Obadiaru, an old friend of Beneditta’s, and kept there for a few weeks with no sign of a job or education.


Obadiaru’s son, who suffers from learning difficulties, groped her on the first night in the house in Brockley, southeast London.

But when she complained, Obadiaru allegedly told her: ‘What do you think you are here for?’

The woman was told she was being sent to Italy on October 3, 2011, and collected another false passport from Olayinka’s home.

‘It was then for the first time that this very young girl from a small village in Africa, miles away from home, realised she was about to be sent to Italy to be forced into prostitution’, Mr Ames said. 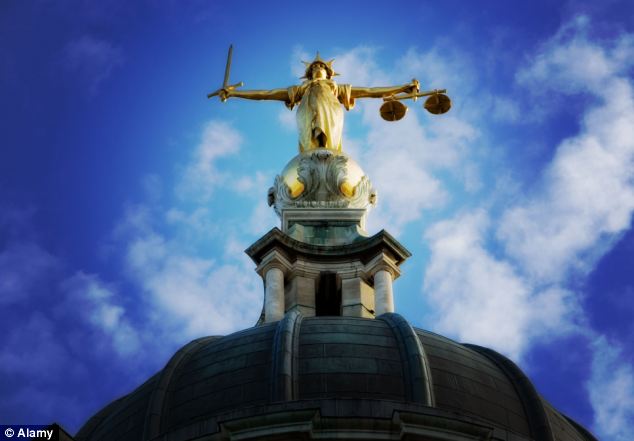 Sex slave: When the woman arrived in the UK, she was kept at a house in London before being told she was going to Italy, the Old Bailey (pictured) heard. Only then did she realise she was being sold in to prostitution

‘She came to that gradual realisation, and she suddenly remembered hearing conversations between some men and their girls in Italy.

‘She couldn’t speak Italian and there was no question of her being able to work in Italy in the normal sense.

‘She became very upset and fearful of what awaited her.’

The gang’s plan was thwarted by Italian immigration officials, who stopped the woman on an obviously forged passport at Milan Airport and sent her straight back to the UK.

After she was detained by immigration officials, the woman led them to the alleged identity factory in Osoba’s flat in South Bermondsey, southeast London, and laptops which had been used to make false documents by Olayinka.

Mr Ames said the National Crime Agency launched Operation Visionary after quizzing the woman ‘to penetrate and stop the activities of an organised crime group based in Africa and here in England, which has as its aim the trafficking of vulnerable young women from Nigeria to European countries, including Italy and France for the purpose of prostitution’