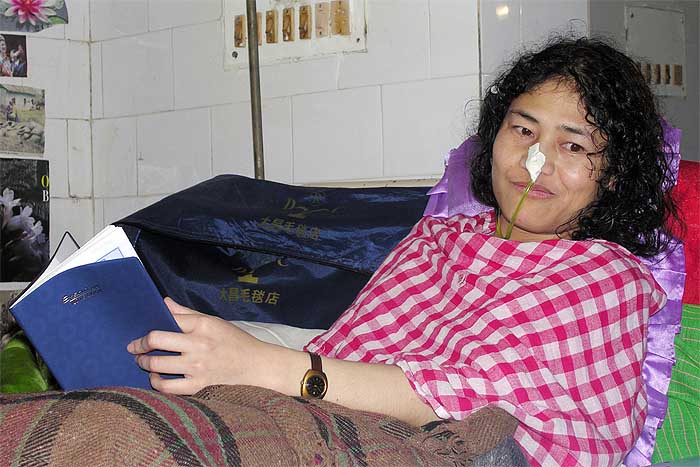 Irom Sharmila – who holds the record for the world’s longest hunger-strike – passed another dark milestone in history today when she marked 12 years without eating or drinking.

The 40-year-old from India’s north-east has been force-fed in a secure hospital as she continues to protest against the impunity enjoyed by the armed forces.

“We are observing the spirit of Sharmila by holding a candlelit vigil,” the woman’s brother, Singhajit, said tonight from Imphal, the capital city of the state of Manipur. “I last was able to see her on 9 October. She expressed to me that she would not accept any award from any organisation until her demands have been fulfilled.”

The woman known as the Iron Lady of Manipur has devoted herself to the cause of human rights in a way that is hard to conceive. Since November 2000, when a group of soldiers from the Assam Rifles shot dead a 10 civilians standing at a bus-stop, she has refused to eat, drink or even brush her teeth. Charged with trying to commit suicide, she has been repeatedly arrested, detained and force-fed by tubes that are inserted into her nose twice a day.

Her sacrifice has focused on a struggle that is barely glimpsed in the rest of India, let among the wider world. A decades-long insurgency by up to 50 armed groups and the subsequent response by the government which has sent in thousands of troops, has created a dark, deadly situation in Manipur where the rule of gun – be it the gun of an insurgent or that of a member of the security forces – holds sway.

Sharmila, who has not seen her mother since her fast began, is demanding that the government overturn the Armed Forces Special Powers Act (AFSPA), a piece of legislation also in force in Kashmir, which makes it all but impossible to hold any soldier accountable for his actions. Campaigners say this law gives broad licence to the security forces to act with impunity.

Last month activists filed a petition with India’s highest court demanding to know why there had been more than 1,500 so-called ‘fake encounters’ – when security forces simply shoot suspects dead – in the state over the last 30 years. “In Tripura [another north-eastern state] there has been no violence for four years. In Nagaland there has been a ceasefire for 15 years and yet they are still declared ‘affected areas’ and this law is in place,” said Babloo Loitongbam, of the Manipur-based Human Rights Alert, an NGO. “It’s all to do with political expediency.”

In the last year or so, the situation in Manipur has calmed and the authorities have removed the provisions of the AFSPA from a handful of areas in Imphal. However, Sharmila has said she will continue her fast until it is removed from the entire state.

The woman who has been given a number of domestic and international honours for her campaign also recently announced she would no longer accept any awards while her fast continued. Mahasweta Devi, a celebrated human rights activist and writer from West Bengal, recently tried to honour the hunger-striker with another award but her brother declined, politely, saying that his sister wanted to wait until her struggle was completed. “After Sharmila comes out winning, she will collect it herself,” he said, according to reports in the local media.

For all Sharmila’s efforts, campaigners say they have little optimism that the government will respond to an issue about which the Indian public and the world is largely unaware of. “There has not been any change,” said Sanjoy Hazarika, an expert on India’s north-east who teaches at Delhi’s Jamia Millia Islamia university. “The cabinet has not even considered a proposal on this issue from the home ministry that was sent two years ago.”