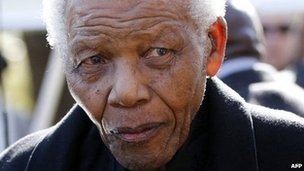 Nelson Mandela’s health has deteriorated and he is in critical condition, the South African government said Sunday.

The office of President Jacob Zuma said that the president had visited the Mandela, the former president of the country who was imprisoned for nearly three decades as he battled the country’s apartheid system of racial separatism, Sunday evening.

Zuma’s office said he was informed by Mandela’s doctors that his condition had become critical in the last 24 hours.

Mandela, 94, has been intensive care for more than two weeks week. He was hospitalized on June 8 for what the government said was a recurring lung infection.

Zuma said in a statement: “The doctors are doing everything possible to get his condition to improve and are ensuring that Madiba is well-looked after and is comfortable. He is in good hands.”

Madiba is Mandela’s tribal nickname. He turns 95 on July 18.

Mandela became South Africa’s first black president after the end of apartheid in 1994.