Edo sanitation: Why Gov. Oshiomhole told the widow to “go and die” 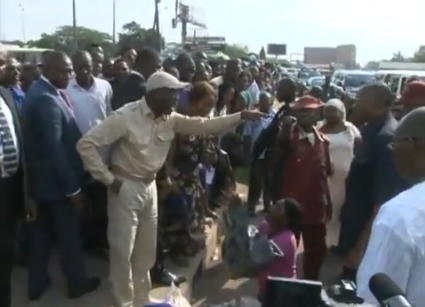 Governor Adams Oshiomhole of Edo is in the eye of the storm following his shabby treatment of a widow which was filmed and has been spread over the internet.

[READ:“Go and die!”: Oshiomhole caught on tape lashing out at crying widow]

The governor is seen in the video telling the obviously distressed woman to “go and die.”

According to widespread reports, the woman was selling wares in a prohibited area, by a busy roadside and it was this act that attracted the anger of the governor.

Governor Oshiomhole was leading a task force which was responsible for dealing with such offenders. The governor has intensified efforts to rid the state of roadside hawkers, much like his Lagos counterpart, Babatunde Fashola.

The crackdown on the hawkers has spread nationwide with many states outlawing the practice and linking it to accidents and the piling up of refuse on roads and in drainages.

This video shows Governor Adams Oshiomhole ostensibly leading officials of the state to sanitize the city of Benin, the Edo State capital.

In the course of his tour of duty, he came across a roadside hawker. The poor widow knelt before the imperial governor, a former labour leader, begging for her little means of livelihood to be saved.

In what could be regarded as the most unkind cut of all, the governor said the widowed woman should “go and die”!

Afterwards he stood for some seconds looking indifferently on how the officials took the women’s belongings away, and he left the scene of the drama.