From George Clooney’s acts of kindness to K1 De Ultimate’s tragedy, here are the biggest stories that made the rounds in entertainment yesterday – and others that unraveled while you slept.

Veteran Fuji musician, King Wasiu Ayinde Marshall has lost one of his children.

The celebrated singer took to Instagram to eulogise the late Wasilat writing that he would never question God for the event of her death.

“About your sickness and all our efforts through Medical means that was available to us to make you better failed us, neither did your prayer and that of mine and everybody that loves you never heeded by God, rather it is a direct word from God Almighty that Allah Subhanalahi Watahala wants you around him in his paradise and I totally submit to that and never question him God for doing that.”

OLARONKE ASHABI MIIl: 17th July 1983 -12th December 2017, The 2 dates in HISTORY and shall never be forgotten ever in my life.. The first, a date you came to this world and the later the day you departed. I give glory & thanks to God Almighty who gave you to me as a GIFT by you coming to this world for a purpose and through me, I have seen that severally while you were growing that I am PRIVILEGED to be your FATHER and also to the kind of a child that also double as my FRIEND. About your sickness and all our efforts through Medical means that was available to us to make you better failed us, neither did your prayer and that of mine and everybody that loves you never heeded by God, rather it is a direct word from God Almighty that Allah Subhanalahi Watahala wants you around him in his PARADISE and I totally submit to that and never question him God for doing that. You embraced God and his commandments, also with your knowledge of the Holy QURAN is enough TESTIMONY to the fact that you truly served your God whom you knew too well inside and outside. If you are able to look back right now this minute You will see how people across the GLOBE are all trying to comfort me and soften my heart with many beautiful words and verses from both QURAN and BIBLE, the books that guide us to our CREATOR then you will agree with me your DEATH is well celebrated as one already in ALJANATA. ADESUBOMI BABAMI: Shagbola Ogoji, O kobi foshika ko fenu a rare wuree, Omo Olorule Sesese Natiijebuode titi de Epe, Omoba Alade Merindilogun, Omo Awujale Fidipote ton gbenu Aafinpase dede lu. Alayeeeeeee Dajiiiijii Rest peacefully well with your creator as I have submitted to his Will without regret or complain. Many thanks to you friends, Fans, Family and all Associates across the GLOBE that Grief and Mourns with us in this home-call of my Best Friend. I thank you once again.. Ao ni fi irue san oo. Ojo gbogbo wa ati awon omowa aape lorile aiye. OLASUNKANMI MARSHAL- K1 DE ULTIMATE ULE OMO OJUSHAGBOLA VILLA IJEBU-ODE OGUN STATE NIGERIA.

A post shared by Olasunkanmi Adegoroye Marshal (@kingwasiuayindemarshal) on Dec 13, 2017 at 5:04am PST

Hollywood actor and director, George Clooney and his wife, Amal may be the most considerate parents to fly on a plane with.

It has been reported that the couple handed out noise-cancelling headphones to their fellow first class passengers on a flight to England with their 6-month old twins.

E! News writes that the Casamigos headphones were accompanied with a note that read, “Our twins just discovered SQUAWKING!! Hope this helps make the flight a little quieter” but the twins ended up not crying. 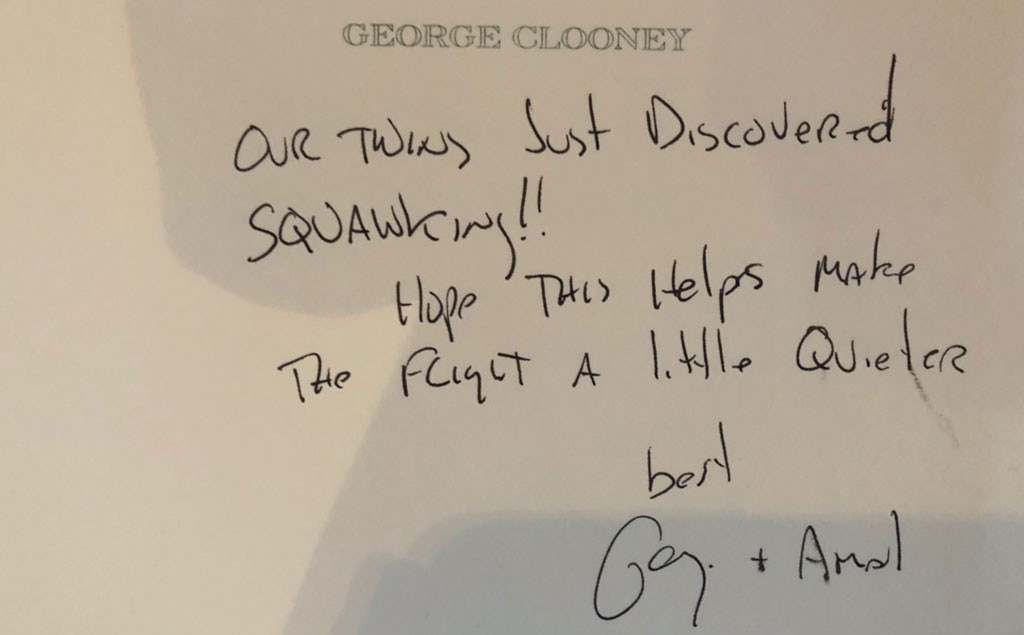 This comes barely 24 hours after Clooney’s best friend, Rande Gerber revealed in an interview with MSNBC’s Headliners that the 56-year-old actor once gave out $1 million to 14 of his closest friends.

Gerber narrated how Clooney invited he and the other guys who fondly refer to themselves as The Boys to dinner in his home, placed black suitcases in front of them and said to them “‘Listen, I want you guys to know how much you’ve meant to me and how much you mean to me in my life”.

“I came to L.A., I slept on your couch. I’m so fortunate in my life to have all of you and I couldn’t be where I am today without all of you. So, it was really important to me that while we’re still all here together, that I give back. So I want you all to open your suitcases”, Clooney said further.

When The Boys opened the suitcases, they found $1 million dollars in $20 bills. All 14 of them.

We need more George Clooneys in this world, don’t we? The list is getting longer and the disgraced movie mogul has again denied this one.

Actress, Salma Hayek has broken her silence in a New York Times article where she detailed how Weinstein would ask to shower with him, request for massages and oral sex.

Hayek said they got into a business relationship when they both worked on the set of “Frida” and production and filming was hell for her as Weinstein ensured she paid the price for saying NO to him.

She recounts how he told her, “the only thing I had going for me was my sex appeal” and threatened to shut down production if she didn’t film a nude love scene.

Hayek said, “This time, it was clear to me he would never let me finish this movie without him having his fantasy one way or another. There was no room for negotiation. I had to say yes.”

Hayek admits she didn’t consider her voice important at the time other women came forward with their experiences. She says, “For years, he was my monster”.