HOT! Rihanna posts (yet another) racy picture in bikini (LOOK)

If Rihanna is trying to send a message to her ex Chris Brown, it’s coming across loud and clear.

The pop star posed for a teasing tweet in a bikini on Saturday with the caption: ‘Lil ol me in my big ol tub!!!’

It’s the star’s second racy picture this week – she also posted a cheeky shot of her derriere from the set of her Pour It Up clip on Wednesday.

It doesn’t seem to be any coincidence that they come after ex Chris Brown has been gallivanting about with Karrueche Tran again. 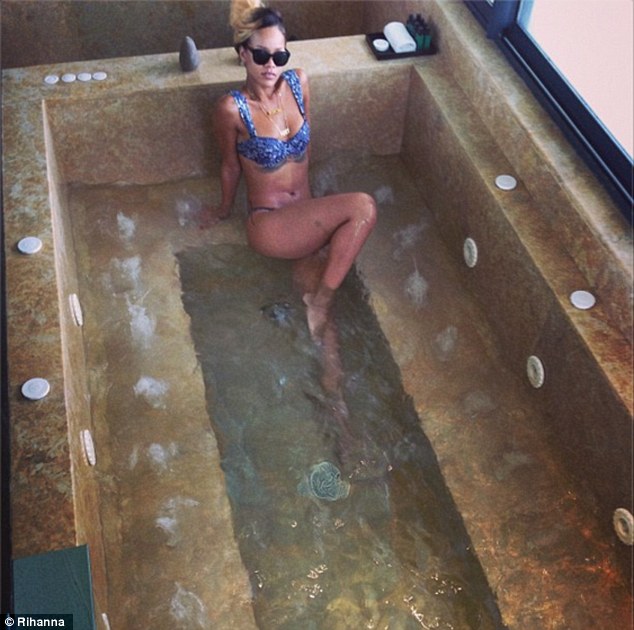 Sassy: ‘Lil ol me in my big ol tub!!!’ Rihanna posted to twitter on Saturday

Tran lit the fire with a raunchy upload on her birthday: a flashback snap of her thrusting her naked bottom into Chris’ face. 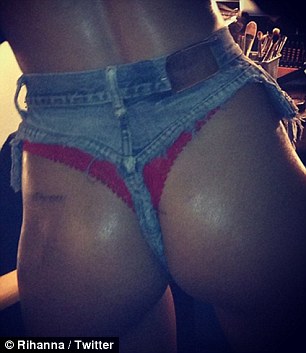 Bum business: ‘And that’s a #WRAP !!!!! #pouritupvideoshoot’ Rihanna tweeted in the wake of rumours

Proving she’s sexy and she knows it, Rihanna fought back with an image capturing the Diamonds star in a printed blue Charlie by Matthew Zink two-piece as she lounges in a jacuzzi tub, one leg fully in the water and the other positioned across her lap.

To prevent her hair from getting wet, the Barbadian bombshell pulled her blonde locks back.

And she seemed to be trying to give off a bad gal vibe, wearing her jet black sunglasses as she soaked her skin.

Rihanna is currently in Rabat, Morocco for the Mawazine Festival.

On Friday, she took the stage in various states of undress, showing off her legs, bottom and tum.

She tried to adhere to the more conservative style of the predominately Muslim country, yet despite covering up in what resembled a doctor’s coat, the singer still managed to flash her midriff as she set the stage at the music festival. 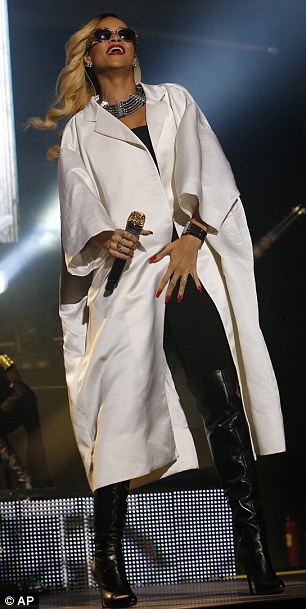 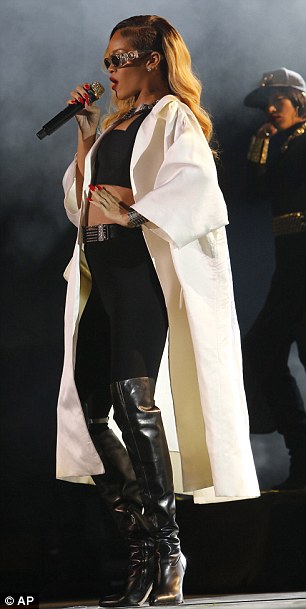 Silky: The coat appeared to be silky and was oversized hanging off her slender body

And in true Rihanna style she managed to turn the over-sized and unflattering silk-like coat into something rather sexy.

Wearing her trademark thigh-high boots with black leggings, the 25-year-old strutted her stuff on stage.

As the coat flapped about she revealed her crop top underneath and her toned stomach.

Her blonde hair had been styled in loose curls, and she wore her favourite red lipstick which matched her nails.

Completing her look she wore a chunky silver necklace, bracelet and belt, while she covered her eyes with a pair of plastic rimmed oval sunglasses.

The Diamonds signer looked delighted to be opening Morocco’s’ largest music festival, which will see the likes of Jessie J, Mika, David Guetta and Enrique Inglesias perform over the next few days. 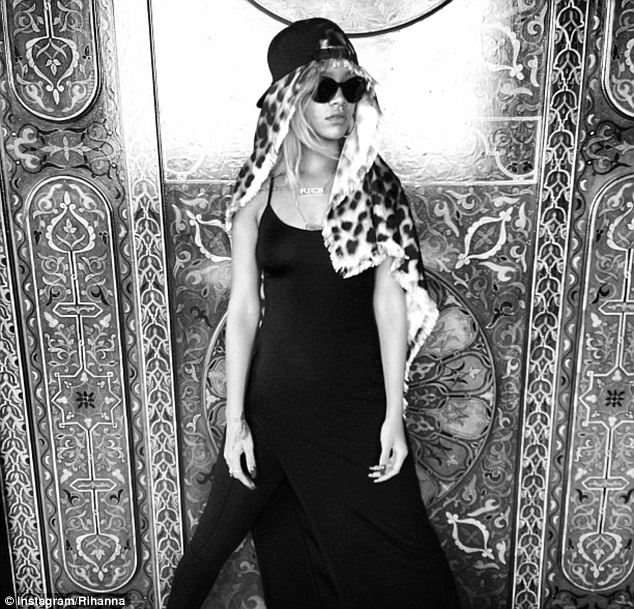 In keeping: Rihanna shared a picture of herself wearing what appeared to be a make-shift burqa

Her performance also marked the start of the European leg of her world tour, which will see her heading to Spain next before arriving in the UK on June 10th.

As she arrived in Morocco, Rihanna slipped into an Arab-inspired outfit to take a couple of pictures for her Twitter followers.

Covering up she wore a leopard print head-dress underneath a backward snapback cap, while keeping her shades on. 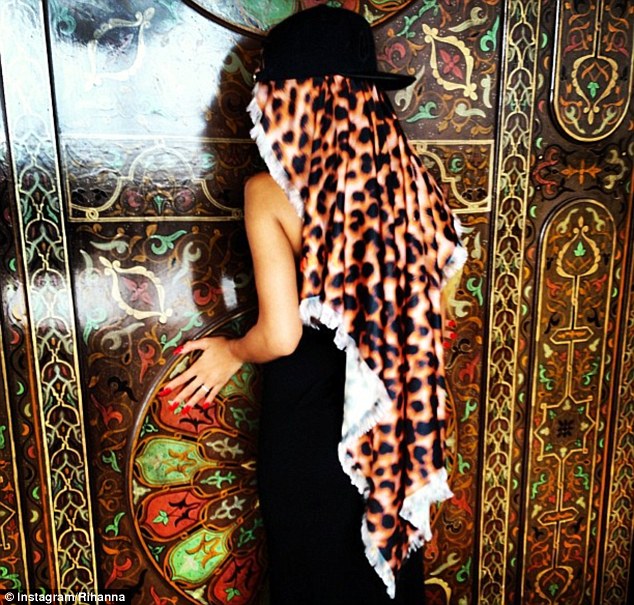 Excited: The singer wasted no time in sharing pictures of herself when she arrived in Morocco 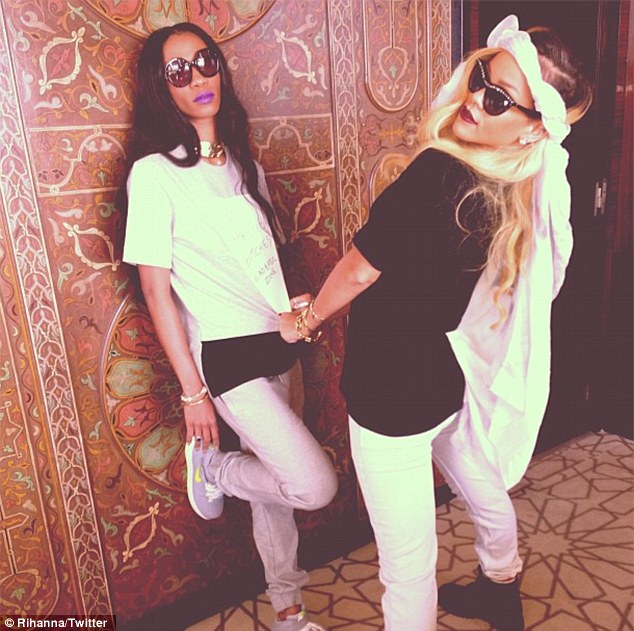 ‘Thuggin’: Rihanna tweeted this photo of herself posing up on Saturday

Tweeting a couple of pictures of her get-up, she wrote: ‘Guess who’s back in #MOROCCO’

Her make-shift burqa appeared to be inspired by a look seen on Jeremy Scott’s spring 2013 NYFW show, which saw a model walk with a leopard print burqa.

The covered up look was a far cry from a snap she posted earlier in the week which showed her wearing a pink lacy thong, underneath what was merely the skeleton of a pair of denim shorts. 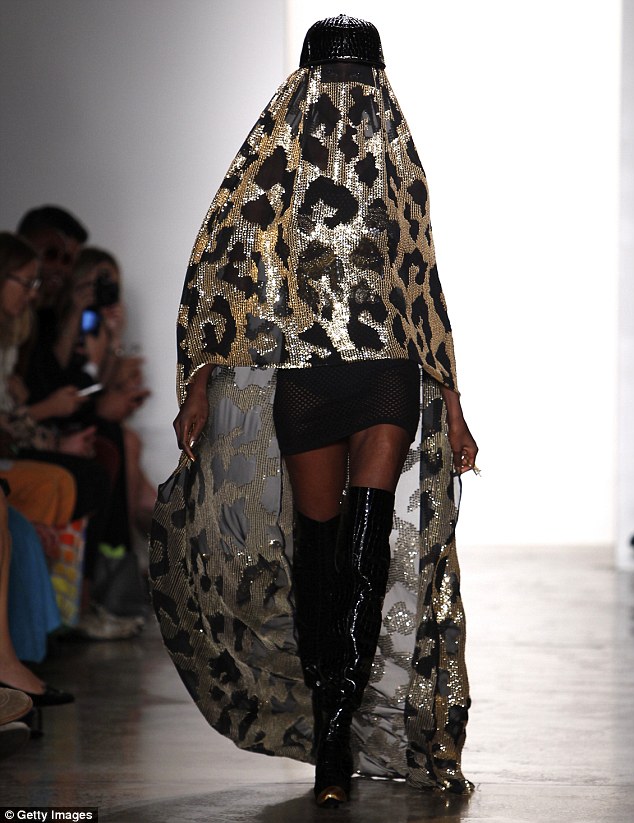 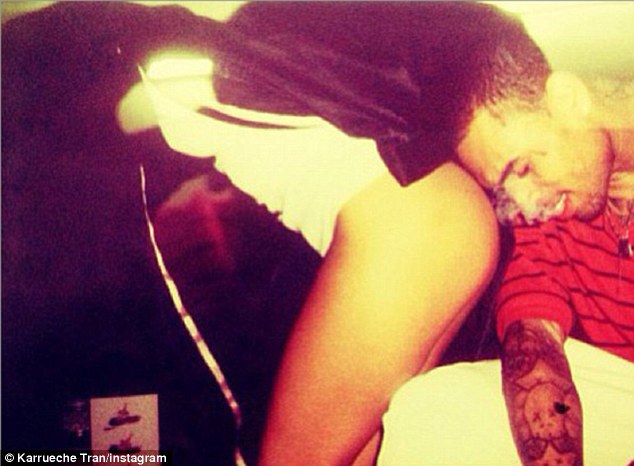 ‘TBT my birthday last year. Who’s face am I gonna put my ass in this year?’: It was Karrueche Tran’s birthday on Saturday, and this was what she chose to tweet… before adding that she was ‘kidding’