Latest ‘underwear bomber’ was working for the CIA and Saudi Intelligence 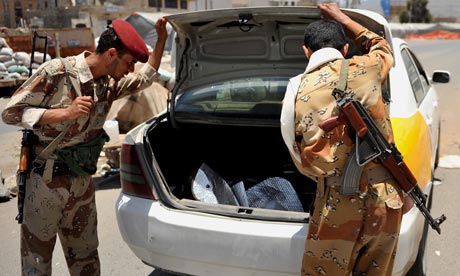 ‘Underwear bomber’ involved in a plot to attack jet was in fact working as an undercover informer with the CIA, it has emerged. Photograph: Yahya Arhab/EPA

A would-be “underwear bomber” involved in a plot to attack a US-based jet was in fact working as an undercover informer with Saudi intelligence and the CIA, it has emerged.

The revelation is the latest twist in an increasingly bizarre story about the disruption of an apparent attempt by al-Qaida to strike at a high-profile American target using a sophisticated device hidden in the clothing of an attacker.

The plot, which the White House said on Monday had involved the seizing of an underwear bomb by authorities in the Middle East sometime in the last 10 days, had caused alarm throughout the US.

It has also been linked to a suspected US drone strike in Yemen where two Yemeni members of al-Qaida were killed by a missile attack on their car on Sunday, one of them a senior militant, Fahd Mohammed Ahmed al-Quso.

But the news that the individual at the heart of the bomb plot was in fact an informer for US intelligence is likely to raise just as many questions as it answers.

Citing US and Yemeni officials, Associated Press reported that the unnamed informant was working under cover for the Saudis and the CIA when he was given the bomb, which was of a new non-metallic type aimed at getting past airport security.

The informant then turned the device over to his handlers and has left Yemen, the officials told the news agency. The LA Times, which first broke the news that the plot had been a “sting operation”, said that the bomb plan had also provided the intelligence leads that allowed the strike on Quso.

Earlier John Brennan, Barack Obama’s top counter-terrorism adviser and a former CIA official, told ABC’s Good Morning America that authorities are “confident that neither the device nor the intended user of this device pose a threat to us”.

US officials have said the plot was detected in its early stages and that no American airliner was ever at risk.

The FBI is conducting forensic tests on the bomb as a first step towards discovering whether it would have cleared existing airport scanning systems. Dianne Feinstein, the Democratic senator for California who heads the Senate intelligence committee, gave an early hint when she said that she had been briefed about the device which she called “undetectable”.

But AP quoted an unnamed US official as saying current detection methods probably would have spotted the shape of the explosive in the latest device.

Just how major an escalation in threat is posed by the bomb remains unclear. Security sources have told news agencies that it was a step up in levels of sophistication from the original underwear bomb that was used in a failed attempt to blow up an airliner over Detroit on Christmas Day in 2009.

The device used a more refined detonation system, and Brennan said “it was a threat from a standpoint of the design”.

When it comes to who made the device the focus is on an al-Qaida’s offshoot, Al-Qaida in the Arabian Peninsula (AQAP). Matthew Levitt, a counter-terrorism expert at the Washington Institute, said that the interception of the plot amounted to a significant achievement for US security agencies.

He said: “The FBI is holding the device, which suggests that this was done by having boots on the ground. This was a sophisticated operation that shows we are making in-roads in serious places.”

Levitt, who was involved as a senior analyst in the FBI’s investigation into 9/11, said that it was natural to be sceptical in a presidential election year about security announcements. “But this was not political, it didn’t come from the White House and my sense was that it was a really unique success,” he said.

Levitt said that the spotlight would now be even more intense on Ibrahim Hassan al-Asiri, AQAP’s assumed bomb-making chief, who is thought to be hiding out in Yemen.

Asiri is believed to have been the creator of the Detroit underwear bomb as well as explosives that were packed into printer cartridges bound for Chicago in 2010.