They are horrific pictures which highlight the worrying deterioration in Egypt’s security.

Two men – accused of stealing a motorised rickshaw – were badly beaten by vigilantes, stripped half-naked and hung by their feet in a crowded bus station in the Nile Delta.

A baying crowd of 3,000 people watched, with some shouting ‘kill them’. Both men died. 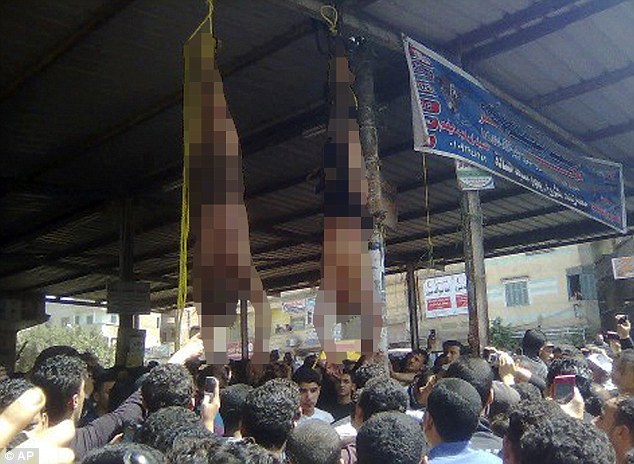 Horrific: These two men – accused of stealing a motorised rickshaw – were badly beaten by vigilantes, stripped half-naked and hung by their feet in a crowded bus station in Egypt

The lynchings came a week after the attorney general’s office encouraged civilians to arrest lawbreakers and hand them over to police.

It was one of the most extreme cases of vigilantism in two years of sharp deterioration in security following Egypt’s 2011 uprising. The worsening security coupled with a police strike prompted the attorney general’s call for citizen arrests last week.

The scene was emblematic of the chaos that is sweeping the country, mired in protests over a range of social, economic and political problems and with security breaking down to frightening proportions.

The state-run newspaper Ahram reported on its website that the two men were dragged in the street after being caught ‘red-handed’ trying to steal a rickshaw. It said they were beaten but alive before they were hung.

Witnesses claimed the men had kidnapped a girl inside the rickshaw, but that she escaped unharmed.

A photographer who witnessed the scene told The Associated Press that some in the crowd of around 3,000 threatened to kill him if he took pictures of the lynching.

He said that women and children in the crowd watched the men being hung by their feet, and that some even chanted in support of the lynching. 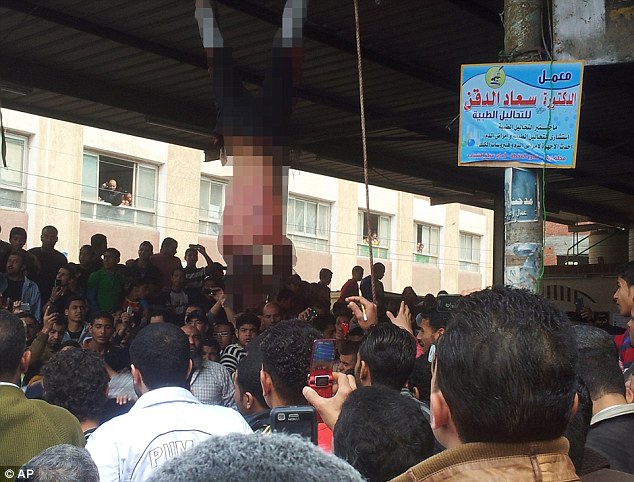 Brutal: It was one of the most extreme cases of vigilantism in two years of sharp deterioration in security following Egypt’s 2011 uprising

Residents also threatened to lynch another two men accused of being involved in the rickshaw theft.

Photographs from the scene show the two men hanging upside down from a rafter in their underwear at an open-air bus station in the town of Samanod, about 55 miles (90 kilometers) north of Cairo.

They appear badly beaten. Some initial reports said they were hung from a tree but photos from the scene showed it was a rafter.

Other photographs show the men then lying on the ground dead in their underwear, with ropes around their feet. Their bodies are covered in dirt, bruises, blood and lacerations as a group of angry looking men gathered around them. One man in the crowd grasped a knife in one fist and another held up a bloodied wooden stick.

The witness said the crowd then took the bodies to a nearby police station and dumped them at the front door.

Ahram reported that police could not reach the site of the hangings because residents had cut off the roads to protest a shortage of diesel fuel, one of Egypt’s many crises. Earlier in the day, residents of the nearby city of Mahalla had cut off a main train track to protest the fuel shortages.

‘The lack of security has created a sense of terror here,’ the witness said, speaking on condition of anonymity for fear of reprisal. ‘The entire area is shut down because of protests against the fuel shortages.’

Security officials said those who tried to help Worrying: A huge crowd gathered to watch the lynching

They then burned his body while it hung on a light pole. Another vigilante incident that year was in the Nile Delta province of Mansoura, where relatives of a victim took justice into their own hands and lynched two suspected killers.

Citizens have grown bolder in taking matters into their own hands following the 2011 uprising that ousted longtime authoritarian ruler Hosni Mubarak. The country’s once powerful and feared police force was left weakened after the revolt.

Egypt is embroiled in another wave of political unrest that has also engulfed the nation’s police force.

Thousands of officers and low-ranking policemen have broken ranks, staging protests and waging strikes against what they say is the politicization of the force by President Mohammed Morsi and his interior minister.

Some of the striking police officers allege that the Brotherhood group is attempting to control them. The Brotherhood denies that.

Opponents of the attorney general’s call for citizen arrests fear that it is a prelude to the substitution of police by militias belonging to Morsi’s powerful Muslim Brotherhood group and other allied Islamist groups.

On Sunday, Interior Minister Mohammed Ibrahim, who oversees the country’s police, met with officers and low-ranking policemen to hear their demands.

A statement from the ministry said Ibrahim thanked the police for their efforts. Two days earlier, Morsi attended traditional Islamic prayers at a Cairo-based camp for riot police where he praised the force despite public criticism over their violent response to anti-government demonstrations.

Also on Sunday, dozens of journalists protested outside their syndicate in Cairo against what they claim were assaults on their colleagues by members of the Brotherhood.

Diaa Rashwan, the newly elected head of the syndicate who replaced a figure considered by most journalists as pro-Brotherhood, condemned the alleged assault Saturday evening outside the Brotherhood’s headquarters where journalists were covering a meeting.

The journalists say that after activists sprayed anti-Brotherhood graffiti on the ground outside the headquarters, the Brotherhood guards attacked with sticks and chains.

The Brotherhood said in a statement that guards outside the building were provoked and insulted by the activists and journalists. Many of the group’s offices were attacked across the country in December during violent protests over the drafting of the constitution.

In other developments, the Supreme Administrative Court said a body of judges is reviewing an appeal against suspending parliamentary elections. The voting was slated to begin in April and be held in several stages through June.

Morsi’s Islamist supporters and some in the public exhausted by the turmoil hope the elections will be a step toward bringing some stability, accusing the opposition of stirring up unrest to derail the voting.

But the mainly liberal and secular opposition has called for a boycott of the vote, saying Morsi must first find some political consensus first to ease the wave of popular anger.