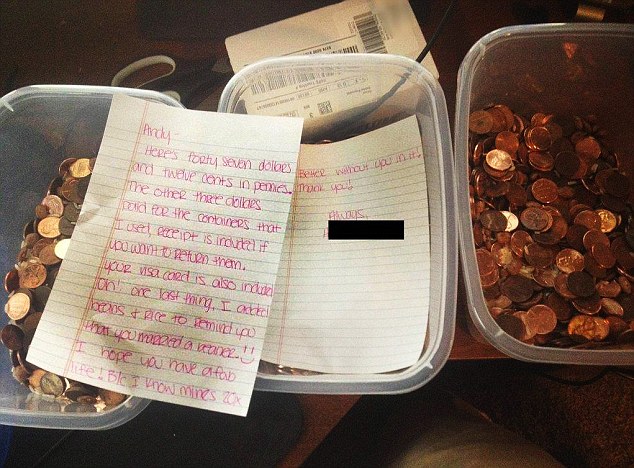 Hell hath no fury like a woman scorned!  In an amusing turn of events, an American woman who was ordered by a court to pay her ex-husband $50.12 as part of a divorce settlement sent the money to him in pennies delivered in Tupperware filled with rice and beans.

To add insult to injury, the unnamed woman wrote her husband a stinging farewell note.

‘Andy, Here’s forty seven dollars and twelve cents in pennies,’ the missive read. ‘The other three dollars paid for the containers that I used. Receipt is included if you want to return them…‘Oh! One last thing, I added beans and rice to remind you that you married a beaner : ) I hope you have a fab life! B/C I know mines 20x better without you in it!’

Photos of the coins divided into three plastic containers were posted on social media site Reddit on Tuesday by the husband, identified only as Andy from Omaha, Nebraska.

The story has stirred much interest among the users of the popular site, with many commenters siding with Andy and condemning his ex-wife’s stunt.