Sad news: Girl killed by hit-and-run driver at Palmgrove while attempting to cross the road 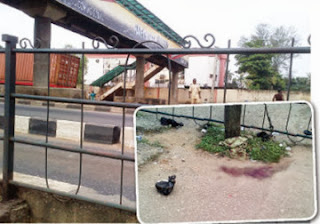 Tragedy struck on Saturday night at Palmgrove Bus-stop, Somolu, Lagos after a young lady simply identified as Oluchi was killed by a hit-and-run driver.

Ironically, the deceased died while trying to cross the ever-busy Ikorodu road, just a few inches away from a pedestrian bridge. The incident was said to have occurred around 8pm.

An eyewitness, who declined to identify himself, told sources, that Oluchi was hit by a Toyota Camry and the driver of the car had tried to avoid the accident, which almost compounded the situation.

It was gathered that the driver, in an attempt to avoid hitting Oluchi, almost caused multiple accidents as other drivers around him, were forced to suddenly apply brakes.

The source said, “Oluchi had crossed the service lane and was about to cross the expressway when the accident occurred.

“As she ran, the driver was on full speed, but seeing what was about to happen, he tried to apply his brakes but it was too late.”

Our correspondent, who visited the scene, observed that the deceased was in her early twenties.

She was surrounded by passers-by and a crowd of sympathisers, who tried to identify her after carrying her corpse to a side of the road.

A team of policemen from the Somolu Police Station were observed coordinating traffic, while waiting for an ambulance.

However, when Oluchi’s relatives who had been alerted to the incident, sighted the Lagos State emergency services ,vehicle, they quickly took the corpse away from the scene.

The unidentified relatives, who attempted to transport the corpse on a motorbike, eventually changed their minds and hired a commercial vehicle. It was further gathered that the decision was taken to avoid government bottlenecks which could arise before the corpse would be released to them. The Police Deputy Public Relations officer, Mr. Damasus Ozoani, confirmed the accident to our correspondent on the telephone.

He said, “A woman was knocked down at Palmgrove. Police have been able to recover her corpse and it has been deposited at Gbagada General Hospital. We are trying to investigate and track the vehicle that hit her.”