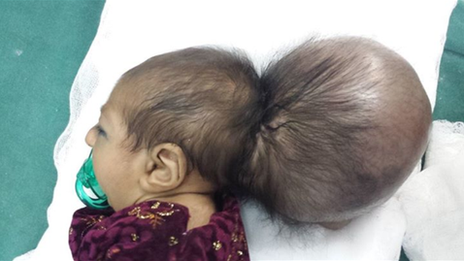 Doctors in eastern Afghanistan have conducted a rare operation to remove a second skull growing on the head of a two-month-old baby girl.

Baby Asree Gul was discharged on Wednesday, after a successful operation in a Nangarhar hospital last week.

Doctors say the surgery was complicated as vital nerves and blood vessels were linked to the second skull.

They say it is the first successful surgery of its kind in eastern Afghanistan.

Asree Gul was born to a family of farmers in Chaparhar district.

She has a healthy twin sister, and doctors believe her unusual condition was caused when a third baby failed to develop in the womb.

The family approached doctors after Asree Gul’s second skull made it difficult for her to sleep, and led to her being stigmatised within their village.

Ahmad Obaid Mojadid, the doctor who carried out the operation, described it as “the first of its kind in Afghanistan’s east”.

“We don’t have very developed equipment,” he said, “but we are very happy to have conducted the operation successfully”.

As one of the world’s poorest countries, Afghanistan’s hospitals often lack the drugs and equipment to carry out complicated medical procedures, and the health authorities in the country are particularly pleased with the success of baby Asree Gul’s surgery.