Niall Horan and Katy Perry have put an end to their persistent flirting by publicly declaring their intention to marry after hooking up in Japan, but John Mayer needn’t be alarmed – it was just for laughs.

The Irish heartthrob is currently in Tokyo with his One Direction band-mates ahead of the final two shows on their 100-date Take Me Home World tour.

With Katy also in town to promote new album Prism, the pair wasted no time in catching up – and Niall later confirmed that she’d accepted the marriage proposal he sent her via Twitter. 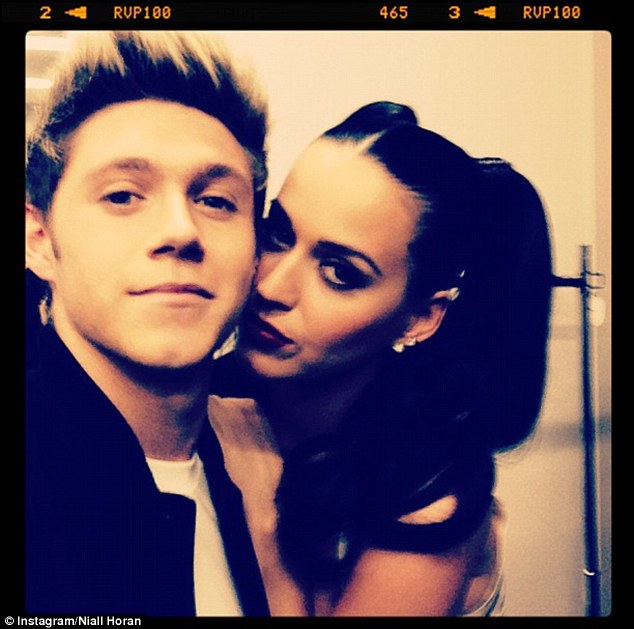 ‘She said yes!’ Niall Horan tweeted Katy Perry’s response to his joke proposal along with this shot, in which she drapes herself across his shoulder

The 20-year-old originally posted the offer after watching her perform current single Roar on The X Factor, and he got his answer during their reunion on Friday.

‘she said yes! It’s happening! Haha,’ he announced after posting an Instagram selfie with the singer, who strikes a seductive pose by draping herself across his shoulder.

Niall also posted a second shot in which he and Katy are joined by Zayn Malik, Liam Payne, Louis Tomlinson and Harry Styles. 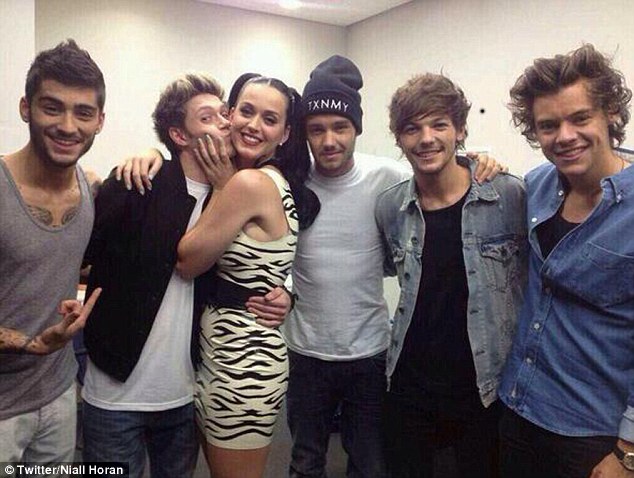 Stolen kisses: Niall Horan leans in for a kiss as the One Direction boys join their band-mate for a group shot with singer Katy Perry

Sporting a tight leopard print mini-dress, Katy cups Niall’s face in one hand while he leans in for a sneaky peck on the cheek.

Their evident chemistry dates back to the MTV Video Music Awards in 2012, when Niall stole a kiss from the 29-year-old after she presented the Best Pop Video gong to One Direction for What Makes You Beautiful.

Katy had previously opened up about her love for Niall and the band in a tweet to her followers shortly before the event.

She tweeted: ‘IF ONE DIRECTION DOESN’T PERFORM ON THE VMA’S I AM GONNA JUMP OFF THIS LEDGE.’ 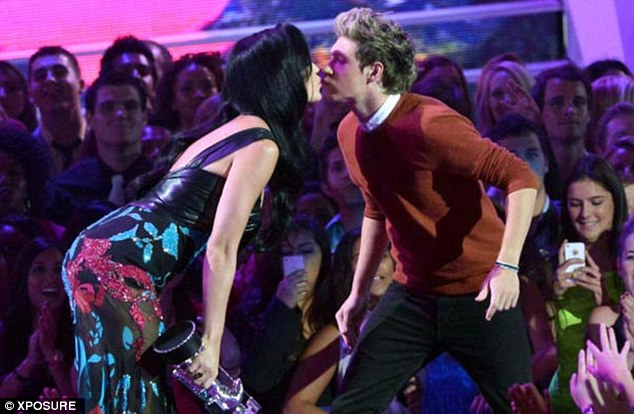 Pucker up: Katy and Niall enjoy a kiss at the MTV Video Music Awards in 2012

Speaking after his televised smooch with Katy, Niall raved: ‘ It was amazing and very purple – she had purple lipstick on. I don’t think there will ever be anything cooler than kissing her… until I marry her, maybe.’

The singer is currently dating John Mayer – her first serious commitment following a doomed 14-month marriage to Russell Brand, the inspiration for many of the autobiographical lyrics on her new album.

One Direction will perform two shows at Makuhari Messe in Tokyo on November 2 and 3 before the promotional campaign begins in earnest for their own album, Midnight Memories.

Proposition: Niall ‘proposed’ to Katy after watching her perform Roar on The X Factor

‘Tinubu is not sick, in London for consultations’ | 5 Things That Should Matter Today

Across Nigeria’s 36 states and the Federal Capital Territory, these are the five top news stories you shouldn’t miss:  Senate ...