When they said “Pride goes before a fall”, they weren’t kidding. Last week, the ridiculous tantrum thrown by Cho Hyun-ah shoki, a senior executive at Korean Air was reported all over the world. Hell broke loose when the plane she was on waited to take off and Cho Hyun-ah shoki was served some nuts in a bowl by a crew member which resulted to her flipping simply because she was served the macadamia nuts in a bag rather than in a dish in accordance with the airline’s nut-handling guidelines.
Cho Hyun-ah shoki got really upset when she asked the poor chap to go fetch the airline’s in-flight manual which showed these proper guidelines (Sighs at the serenres, no be small thing o) and instead, was given the wrong manual. She immediately requested that the plane be turned around and the crew member taken off the flight! (Ahn ahn!!) 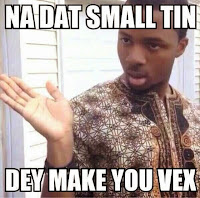 That thoughtless and haughty act of hers, by getting the pilot to turn the plane around to drop off the crew at the detriment of the entire passengers aboard thereby causing a delay, has now cost her her job as Head of Cabin Affairs and her dignity in her country and outside of it. She hung her head in shame and gave a cringing public apology for her unwarranted tantrum.
Things are even worse for her because her father, who also happens to be the airline chairman Cho Yang-Ho is clearly not in support of her haughty attitude and shameful behaviour which he has referred to as “foolish” and he’s also gone as far as blaming himself for not raising her to know better, even though she is 40-years-old!!! He’s said  she would resign from her executive roles at all affiliates of Hanjin, the group that controls Korean Air”. She really overdid things this time around o.
Moral of the story? Keep your temper in check, respect others and correct errors in love rather than with disdain, pride goes before a fall, don’t brew a storm in a teacup………..
—————-
Buki Otuyemi blogs at BukiOtuyemi.blogspot.com
Op-ed pieces and contributions are the opinions of the writers only and do not represent the opinions of Y!/YNaija.