Operatives of the Department of State Security Service were at the residence of the  former Minister of the Federal Capital Territory, Nasir El-Rufai in a bid to arrest him. 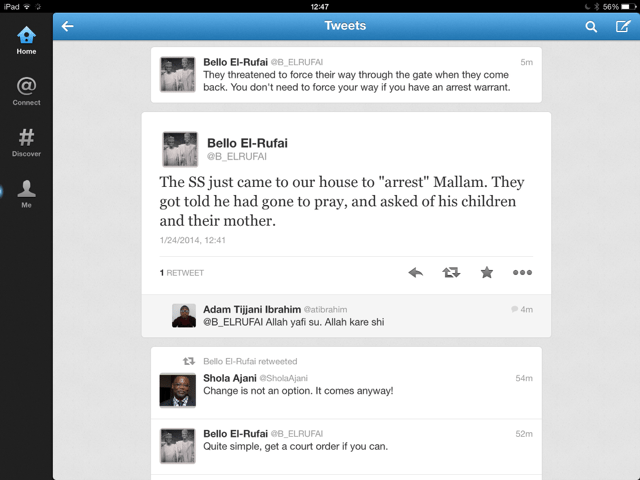 According to reports from Premium Times, the armed operatives are trying to force their way in to arrest the former minister.

It was gathered from El-Rufai that no arrest warrant has been produced by the operatives, saying he would rush back home as soon as he picks his children from school.

The SSS had on Thursday invited Mr. El-Rufai,  the Deputy National Secretary of the opposition All Progressives Congress [APC] in connection with a statement credited to him that there might be violence if the 2015 general elections were not free and fair.

The former minister made the comment while speaking at the Transformed to Transform, T2T Nigeria, Conference and Career Fair, a leadership and empowerment initiative for the National Youth Service Corps members in Abuja on Wednesday.

He was reported to have said the 2015 elections could be marred by riots and other forms of violence that might lead to loss of lives and properties unless the Independent National Electoral Commission, INEC, and the security agencies ensured they were free.

The former minister however refused to respond to the SSS’ invitation on the ground that he had a pending suit against the agency over his detention in a hotel in Awka, Anambra State,  during the governorship election in that state last November 16.

He also told the Director General of the Service, Ita Ekpeyong, that he was willing to meet with him in his home or office or that in the alternative the SSS should produce a warrant of arrest.

But she had earlier issued a statement Thursday warning those making provocative statements ahead of the 2015 general election to desist from such or face the full weight of the law.

Ms. Ogar said the attention of the service had been drawn to incessant provocation statements by some Nigerians threatening violence ahead of the election. She did not mention any name

“Such comments are offensive, misguided and directed at stirring hate among Nigerians,” she said.

“This service and other law enforcement agencies have the mandate to protect the country and its citizens.

“We, therefore, warn all subversive elements that are bent on promoting divisive and disruptive agenda to refrain from such as the full weight of the law shall henceforth be brought to bear accordingly.”