He hit his head on a signpost on Friday while  on a lunch date with pregnant girlfriend Kim Kardashian.

And it appears the embarrassing incident has left Kanye West with a rather nasty looking bump on his forehead.

The 35-year-old looked grumpy as he left  Kim’s house on Saturday morning in Los Angeles sporting a giant protrusion just  below his hairline. 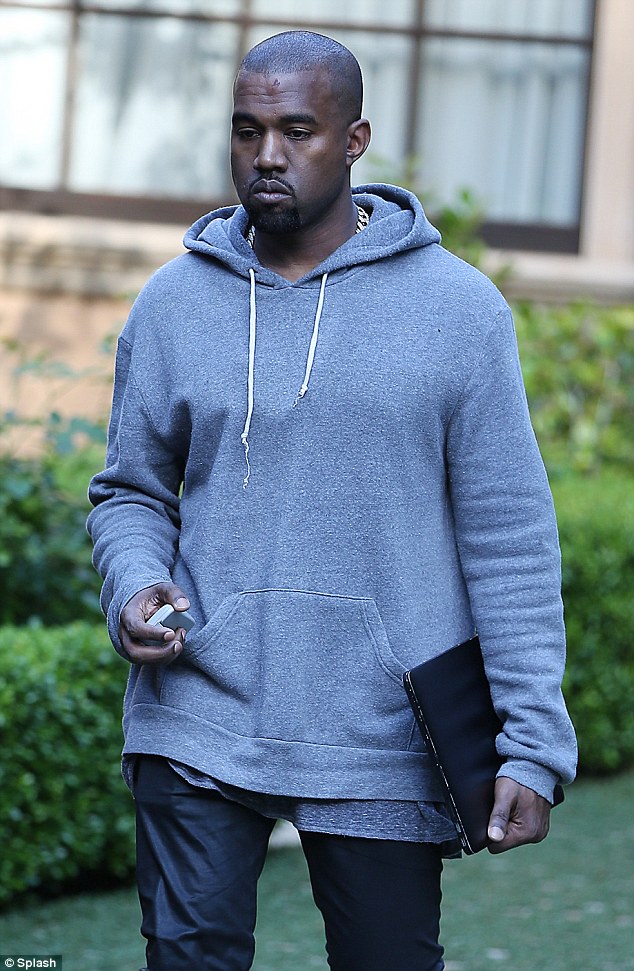 That must hurt: Kanye West sported a nasty-looking bump  on his forehead as he left Kim Kardashian’s house on Saturday in Los Angeles one  day after walking into a signpost 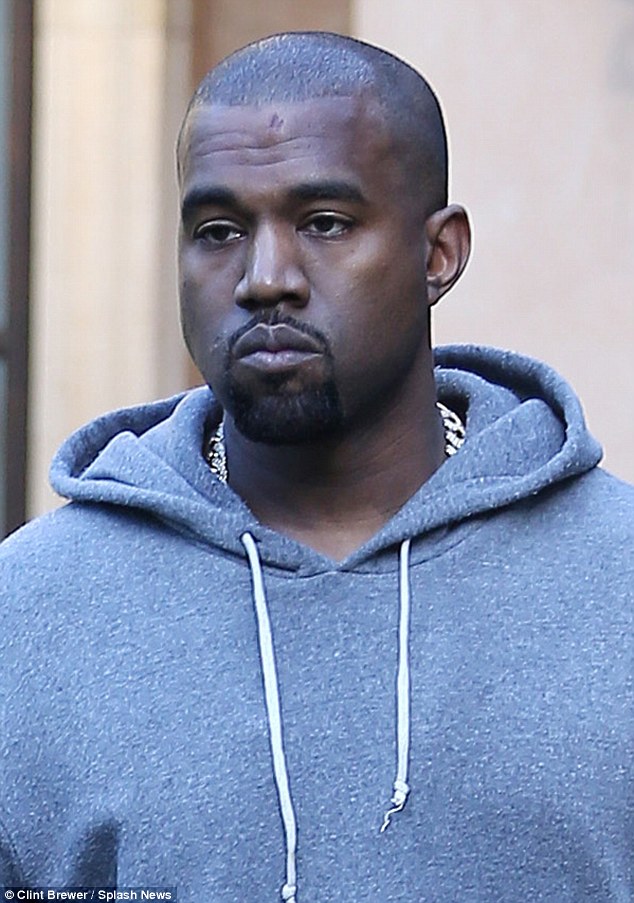 Ouch! The 35-year-old’s injury protruded from his  forehead, and two scabs appeared to have formed

He is known for looking glum even at the best  of times, but the rapper appeared in a particularly foul mood as he made his way  across his reality star girlfriend’s front lawn early in the  morning.

The bump was especially prominent from a  distance as it protruded in a mound from his forehead.

Up close, it was clear that he had broken  skin when he walked into the Beverly Hills signpost as there appeared to be two  scabs that had formed over the injury.

Dressed down style: The rapper wore baggy jeans and a  grey hoodie paired with white trainers as he made his way across his  girlfriend’s front lawn

Kanye was dressed down in baggy dark jeans, a  grey hoodie and white-and-grey Nike trainers while carrying a portable device  and his cellphone.

He was likely still recovering after Friday’s  painful – and somewhat embarrassing – incident, which occurred as he and Kim  made their way into Vietnamese eatery in 9021 Pho in Beverly Hills.

He was busy chatting to his girlfriend when  he walked into the signpost, immediately bending over in pain as he placed his  head in his hands. 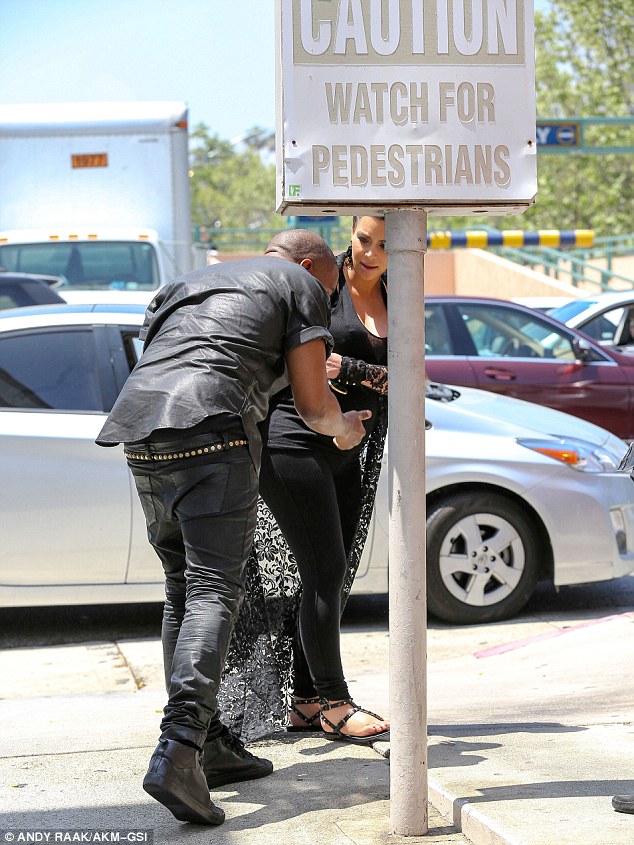 Are you ok? Kim looked on with concern after Kanye  knocked his head on the signpost on Friday in Beverly Hills

Making the incident even more embarrassing  was the fact that the sign was emblazoned with a  warning that read:  ‘Caution: Watch For Pedestrians’.

The Touch The Sky rapper was left with an  abrasion in the middle of his forehead and was clearly not  impressed.

As he became more and more enraged, paparazzi  checked to see if he was okay, but Kanye appeared not to be left with any  serious injuries. 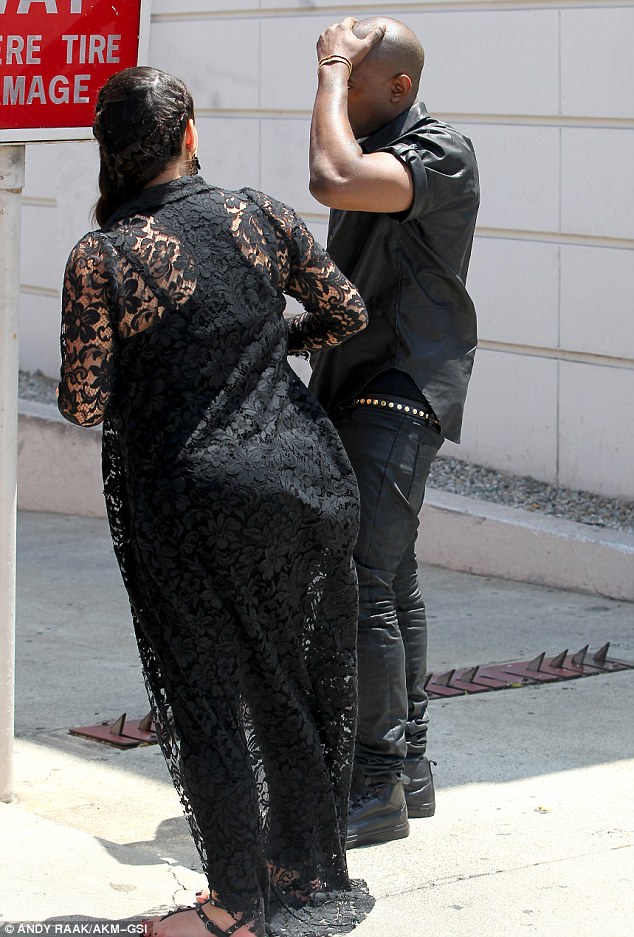 It hurts: Kanye clutched his head in pain as Kim tried to assess the damage  while standing outside the restaurant

Heavily pregnant Kim also looked on with deep  concerned after her man hit his head, grabbing his arm, trying to coax  him.

However, after going into the restaurant to  nurse his wounds Kanye did not calm down.

Instead, the rapper came back out of the  eatery and started yelling at a photographer.

‘All you motherf**kers stop it.’

Despite the photographer saying he had just  got there, there was no stopping the angry Kanye who shoved the man’s camera out  of his hands.

Another patron even joins in the yelling  before Kanye storms back into the restaurant. 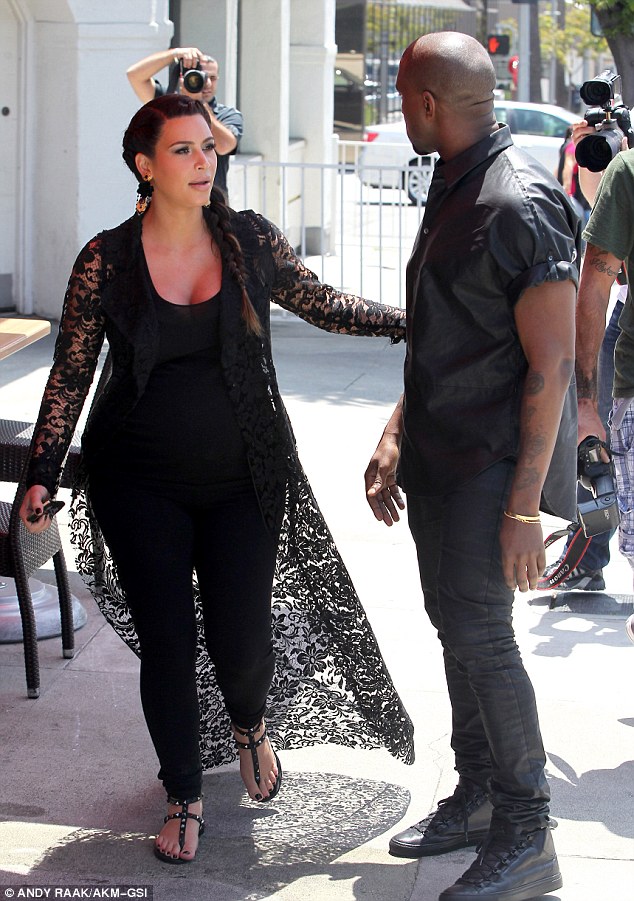 Losing his cool: Kanye started cursing at photographers, telling them to stop  taking his picture