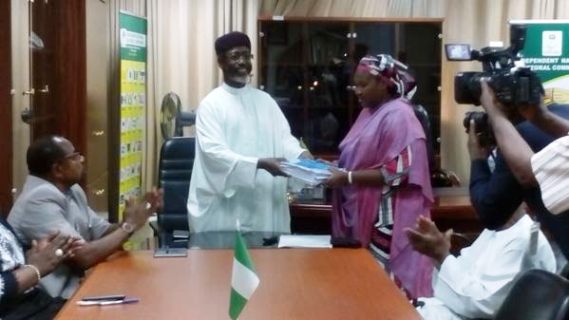 The appointment, which was disclosed in a statement signed by Director of Communications for the Head of Civil Service of the Federation, Haruna Imrana, is with immediate effect.

Here are things you should know about Zakari:

1. She hails from Kazaure Local Government of Jigawa State.

2. She completed her elementary education at Shekara Girls Primary School, Kano in 1971 and proceeded to the prestigious Queens College Yaba, Lagos for her Secondary Education where she obtained her School Certificate/WASC in 1976.
In 1976, she proceed to Ahmadu Bello University (ABU), Zaria in 1976 for a degree programme. She graduated with a Bachelor of Science (B.Sc.) Degree in Pharmacy with a Second Class Upper in 1980.

3. Amina Zakari is a Registered Pharmacist and Member, Pharmacist’s Society of Nigeria as well as member of Nigeria Institute of Management (NIM).

4. Zakari is a widow with five children.

5. She is well learned as she has Certificate in Managing Drugs Supply for Primary Health Care from the International Drug Agency, MHS Amsterdam, Netherlands and a Certificate in General Management Programme, Executive Education in Business and Management, Harvard Business School (HBS) Cambridge, Massachusetts, USA.

6. She started her career in government in 2004 when she joined the services of the Federal Capital Territory Administration, where she was one time Secretary Health and Human Services, Secretary Social Development and Acting Secretary, Agriculture and Rural Development.

7. She became National Electoral Commissioner at INEC in 2010.