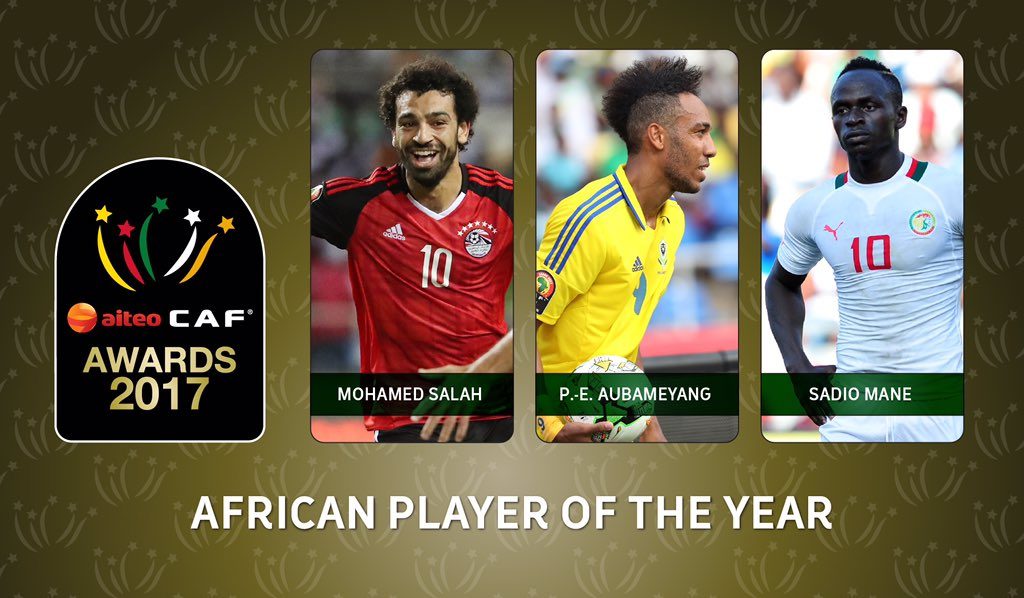 The top three for all the categories of the Aiteo CAF Awards 2017 was unveiled on Monday, December 18, 2017, in Accra, Ghana.

The shortlists for the topmost award, African Player of the Year, was unveiled by former Ghana defender, Sammy Kuffour.

The Awards Gala will take place on Thursday, January 4, 2018, in Accra, Ghana.

African Player of the Year

Women’s Player of the Year

Youth Player of the Year

Coach of the Year

Club of the Year

National Team of the Year

Women’s National Team of the Year

Why we are surprised at Moses’ absence:

On September 1, 2015, Moses joined West Ham United on a season-long loan. But had signed a contract with Chelsea to keep him at the Stamford Bridge till 2019.

Moses made his West Ham debut on September 14 in a 2–0 home win against Newcastle United, where he was named Man of the Match.

In his second game, on September 19 away against Manchester City, Moses scored his only West Ham goal, in a 1–2 win. In April, it was revealed that the loan deal also had an option to make the move permanent at the end of the season, but West Ham decided to turn down the option.

After impressing new manager Antonio Conte during the pre-season, Moses was included in the first-team squad.

On August 15, 2016, Moses played his first league game for Chelsea in three years, coming off the bench for Eden Hazard against West Ham United in a 2–1 win.

On August 23, Moses made his first start and scored his first goal since his return, in the Second round of the EFL Cup against Bristol Rovers in a 3–2 victory.

After back to back league defeats, Conte converted into a 3–4–3 formation with Moses playing as a right-sided wing-back in the following match against Hull City.

His performance as a wing-back helped Chelsea to a 2–0 victory and also earned him the Man of the Match.

On October 15, 2016, Moses scored his second league goal of the season against Leicester City in a 3–0 home win.

On November 26, 2016, Moses scored the winner in a 2–1 victory against Tottenham Hotspur and was named the Man of the Match.

Moses played 40 games in all competitions for Chelsea in the 2016–17 season, scoring four goals.

Moses scored a brace for Nigeria during a FIFA 2018 qualifying match against Algeria in November 2016, helping them secure a 3–1 victory.