A packed passenger jet heading to the UK was left flying on autopilot when both pilots fell asleep at the controls, it emerged last night.

The terrifying incident happened last month on board an Airbus A330 operated by a British-based airline – but officials are refusing to name the company involved.

The pilots – who had apparently slept for just five hours each over the previous two nights – are not expected to face serious disciplinary action over the incident, which highlights the danger of fatigue on flights.

Danger: Both pilots on an Airbus A330 similar to this one fell asleep at the controls during a recent flightThe Civil Aviation Authority revealed that the incident took place on August 13 shortly after the 325-seat plane had taken off, when the pilot and co-pilot agreed to take turn having short naps, leaving the plane on auto-pilot.

However, one of them woke up to discover that they had both been asleep at the same time, and did not know how long the plane had been unsupervised.

The pilots voluntarily reported the blunder to the CAA, which has hidden the name of the airline they work for in a bid to encourage other whistleblowers to speak out.

A spokesman for the regulator said: ‘I would be very surprised if any disciplinary action had been taken against these pilots.

‘Perhaps the airline in question may have looked at their rosta or shift system as a result.

‘In potentially critical safety situations like this, we aim to learn from what happened and ensure it will not happen again.’

He added: ‘We don’t know why the pilots had had so little sleep before this flight. They were taking it in turn to have rest periods, with the one always checking the autopilot and it looks as if both fell asleep at the same time.’ 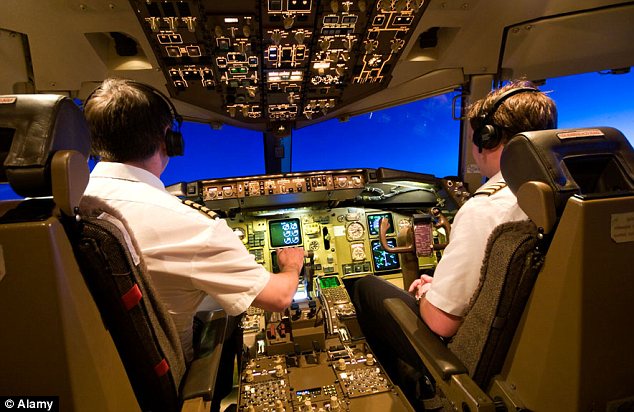 Slumbering: The pilots (not pictured) are not believed to have faced serious disciplinary action

By law, airline bosses must report any potentially dangerous conduct to the industry regulator.

Virgin Atlantic, which operates a fleet of 10 A330 planes, refused to comment on whether or not the flight last month was a Virgin service.

A spokesman for the company said: ‘Virgin Atlantic does not comment on reports released by the CAA as part of its confidential reporting system – the aim of which is to contribute to flight safety through sharing of information within the industry.

‘Safety and security is the primary concern of Virgin Atlantic and matters such as these are taken extremely seriously by all airlines.’

Spokesmen for Thomas Cook Airlines and Monarch Airways, which each have three A330s, said that the plane involved did not belong to them.

POOR ENGLISH AMONG FOREIGN PILOTS ‘COULD PUT LIVES AT RISK’

Aviation officials are set to investigate whether some pilots’ poor grasp of English is putting lives at risk.

Foreign pilots and air traffic controllers are supposed to speak ‘Aviation English’, the international language of communication in air travel.

But reports suggest that many do not speak the language well, leading to potential safety issues which could lead to serious accidents.

The Civil Aviation Authority has commissioned a report from expert Barbara Clark of Queen Mary, University of London on the use of Aviation English worldwide.

A spokesman said: ‘We have seen some recent indications that pilots’ proficiency when communicating in Aviation English is not at the necessary level at all times.

‘While we have seen nothing to suggest there is a major issue here, as the UK’s aviation regulator, safety is our number one priority and we believe it is sensible to examine the issue more thoroughly and have commissioned Dr Clark to do just that.’

Dr Clark, a linguist and anthropologist, added: ‘This project shows that the UK recognises the need to maintain clear and unambiguous communication in aviation, and is treating it as a serious matter.’

Queen Mary said in a statement: ‘The project will explore how existing methods of maintaining clarity can be enhanced to reduce or eliminate language-related problems, which can contribute to accidents or serious incidents.’

Pilots’ union Balpa said that it had repeatedly warned the CAA about the dangers of pilots feeling overly tired, and accused the regulator of being ‘complacent’ about the problem.

General secretary Jim McAuslan said: ‘British pilots want to make every flight a safe flight and tiredness is the biggest challenge they face.

‘As the regulator responsible for UK flight safety the CAA has been far too complacent about the levels of tiredness among British pilots and failing to acknowledge the scale of the underreported problem.’

The problem of fatigue among pilots was revealed in a study by Balpa which showed that 45 per cent of the pilots surveyed had suffered from ‘significant fatigue’.

The figures revealed that about 20 per cent of pilots believe their performance is ‘compromised’ more than once a week.

Many pilots said they now have to fly more than regulation hours to deal with the volume of flights on offer from airlines.

Records show that two cockpit crew members fell asleep during a long-haul flight in 2011. One of the pilots was asleep for ten minutes while his co-pilot slept during his break.

In another case in 2012, a pilot was unable to gain entry to the cockpit and, after using an entry code to access the cockpit, found his first officer was asleep.

While nearly all such cases are resolved without any danger, fatigue has been blamed for high-profile aviation accidents in the past.

The pilot of an Air France flight which plunged into the ocean in 2009, killing all 228 people on board, had only one hour’s sleep the night before, it emerged this year.

Rob Hunter, the head of safety at the British Airlines Pilots’ Association, told the Transport Select Committee last year that often pilots don’t complain about being tired because they are worried about being punished.

Balpa claims that new EU regulations on pilots’ working hours set to be voted on next week could increase the risk of similar incidents by tiring out workers.

Pilots will be able to land an aircraft after going 22 hours without sleep, fly long-haul flights with fewer crew members and operate early-morning flights up to seven days in a row.

The union says the changes will ‘increase tiredness among pilots and the risk of dangerous incidents’.

However, the CAA said today: ‘We understand that Balpa are not happy with the proposals but we think overall it is a good package and not much different to what we have now.’