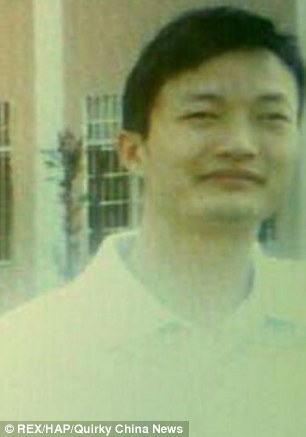 Murdered: Teacher Sun Wukang was killed by one of his students after taking the youngster’s phone

A Chinese student slit his teacher’s throat in an act of revenge after his mobile phone was confiscated.

The student, named only as Lei in local news reports, had been discovered playing with his phone by his teacher Sun Wakang during a chemistry lesson at a school in in Fuzhou, eastern China’s Jiangxi province.

The following day Lei went to Mr Sun’s classroom where the teacher was sat marking papers, and slit his throat from behind.

The 32-year-old father-of-one died at the scene as the student fled.

Today young Lei called the local emergency number and confessed to the crime before turning himself in to police in Shanghai.

Mr Sun had worked as a chemistry teacher at Linchuan No. 2 Middle School for five years before his brutal murder, school official Xiong Haishui told China.org.cn.

He had taken the student’s mobile phone after the young boy had used it during a lesson, but it had been returned at the end of the day.

Despite this, Lei attacked Mr Sun as he was preparing lessons in his classroom, just four days after China’s Teacher’s Day – a national day where students honour their teachers.

Officials say a fellow teacher heard Mr Sun’s scream and called emergency serviced, but the 32-year-old was dead before an ambulance arrived.

In China, ‘middle school’ comprise years 7-9 and 10-12 and is the final stage before higher education.

Linchuan No. 2 Middle School is one of the best schools in Jiangxi Province and has one of the highest University acceptance ratios in the region. 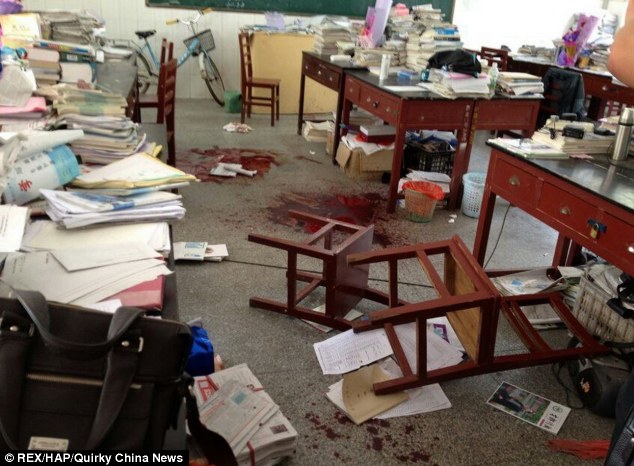 Terror: Mr Sun was attacked from behind in his classroom as he prepared for lessons and died at the scene