Is this truly Jesus’ cross? Archaeologists may have uncovered a relic from the crucifixion (PHOTOS)

Archaeologists in Turkey believe they have found a small piece of the cross used to crucify Jesus.

It was discovered in a stone chest on the site of seventh-century Balatlar Church in Sinop and tests are now being carried out to try to determine its authenticity.

Legend has it that the cross was discovered in 325 AD and parts were sent to religious leaders around the world and this may explain how the piece ended up in Turkey. 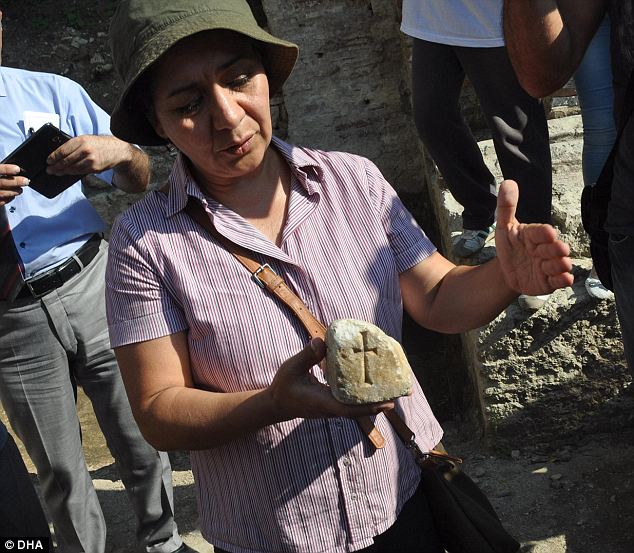 Professor Gülgün Koroglu, pictured, believe she has found a small piece of the cross used to crucify Jesus. It was discovered in a stone chest carved with crosses, pictured, on the site of the Balatlar Church in Sinop, Turkey. The relic hasn’t been photographed yet because it is being tested

Professor Gülgün Koroglu who headed up the excavation told the Hurriyet Daily News: ‘We have found a holy thing in a chest. It is a piece of a cross, and we think it was [part of the cross on which Jesus was crucified]. This stone chest is very important to us. It has a history and is the most important artifact we have unearthed so far.’

Professor Koroglu believes the relics inside the chest are holy because crosses were carved into the sides.

According to religious legend, Helene Augustus, the mother of Constantine travelled to Jerusalem in around 325 AD to learn more about the crucifixion and try to find the True Cross.

The cross was said to have been divided – part of it is believed to have remained in Jerusalem while other parts were sent to religious leaders in Rome and Constantinople, the modern-day Istanbul in Turkey. 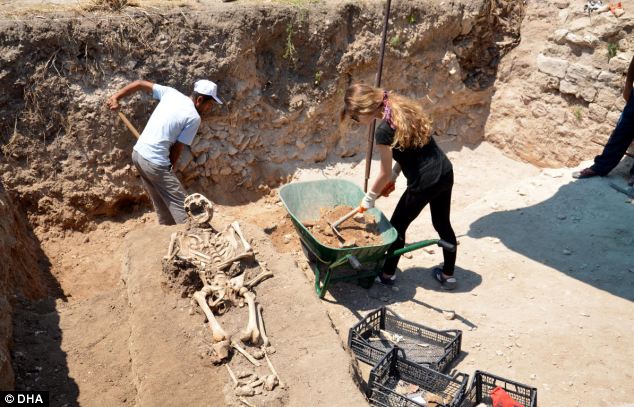 Koroglu and her team began working on the site at the Balatlar Church, built in 660 AD, site in 2009. The excavation has already uncovered more than 1,000 skeletons, like the one pictured, and all the relics found have been sent for testing to confirm their identity and authenticity

A number of relics purported to be parts of the True Cross, or nails used during the crucifixion have been found by churches, including a 2,000-year-old chest discovered in 1981.

French archaeologist Charles Rohault de Fleury supposedly said in the 19th-century that if all of these catalogued relics were put together they would still only make up less than a third of the cross, which is thought to have been around 12ft high.

This suggests that there may still be parts of the cross that are yet to be uncovered.

Koroglu and her team began working on the site at the Balatlar Church, built in 660 AD, site in 2009.

The excavation has already uncovered more than 1,000 skeletons.