“Jonathanians can go jump into the lagoon”: Nasir el-Rufai has an advice for Sanusi’s critics Embattled former CBN governor, Sanusi Lamido Sanusi has been named the new Emir of Kano after the death of the late Emir, Ado Bayero on Friday.

The Secretary to the Kano State Government, Rabiu Zakariya, made the announcement today bringing an end to the speculation that arose immediately after Ado Bayero died.

Sanusi, is a grandson of late Emir of Kano, Alhaji Mohammmadu Sanusi,  who ruled before Ado Bayero from 1954 to 1963. He is also married to one of the late Emir’s daughter’s, Princess Sadiya Sanusi Lamido Sanusi (Nee Bayero) . 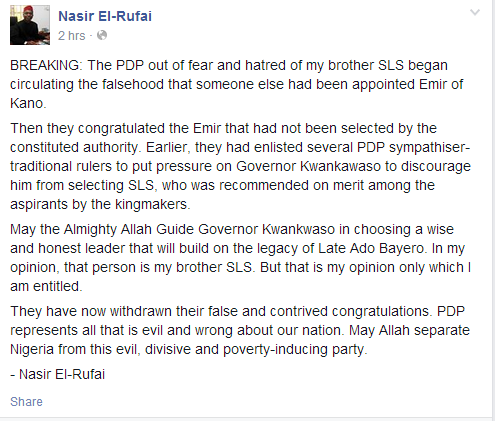 He further tweeted that the best man has won throwing a jab at the perceived opponents of the newly selected Emir.

BREAKING: Alhamdulillah. The best man has won. SLS is the Emir of Kano. Jonathanians can go jump into the lagoon. – Nasir El-Rufai