She’s hot and we know it.

46-year old Nicole Murphy who got divorced from her superstar husband Eddy Murphy  in 2006 is about to wed to football star Michael Strahan.

What can we say, Nicole Murphy is still in such incredible shape even after six children with the actor as she showed off her spectacular bikini body in Hawaii

The leggy 46-year-old was clearly best in show as she filmed scenes for her VH1 reality series Hollywood Exes – a nod to Eddie – in a miniscule bikini.

Sure she should be your ex, Eddie? Nicole Murphy was looking stunning a blue bikini on Sunday as she filmed scenes for Hollywood Exes in Maui, Hawaii

Nicole was joined by a gaggle of other ex-wives of celebrities, all of whom signed up to be part of the show, based around the fact their former flames were famous.

The reality star flattered her toned physique in a petite royal blue bikini adorned with gold beads, and added a touch of bling with a gold body chain.

Her long, toned legs were on show and her washboard stomach made it clear she had been going hard on the ab workouts. 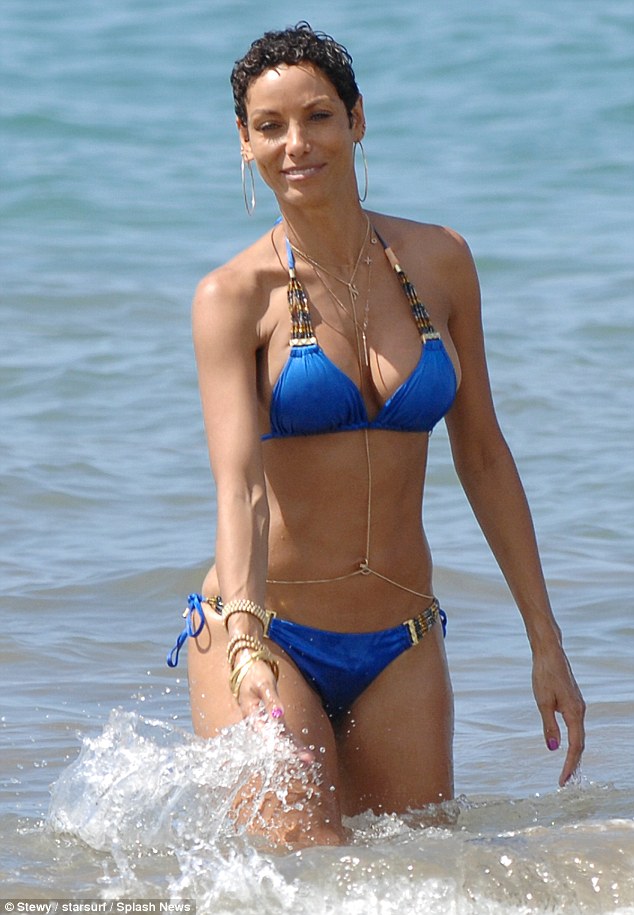 Splashing about: The 46-year-old reality star looked epic as she made a few waves in the ocean

Learning new skills: Nicole looked out to sea as she stood before a paddle board on the sand

She may have been at the beach but Nicole wasn’t about to tone down the glamour so also sported large hoop earrings and elaborate gold bangles.

Her naturally stunning face was adorned with a layer of make-up, with gold eyeshadow coordinating with her accessories.

As she stood amongst her fellow cast members, Nicole stood out as the most toned of them all – perhaps because she’s working hard to get herself wedding dress ready.

Floral delight: The star put a white flower behind her ear as she showed off her clearly epic figure 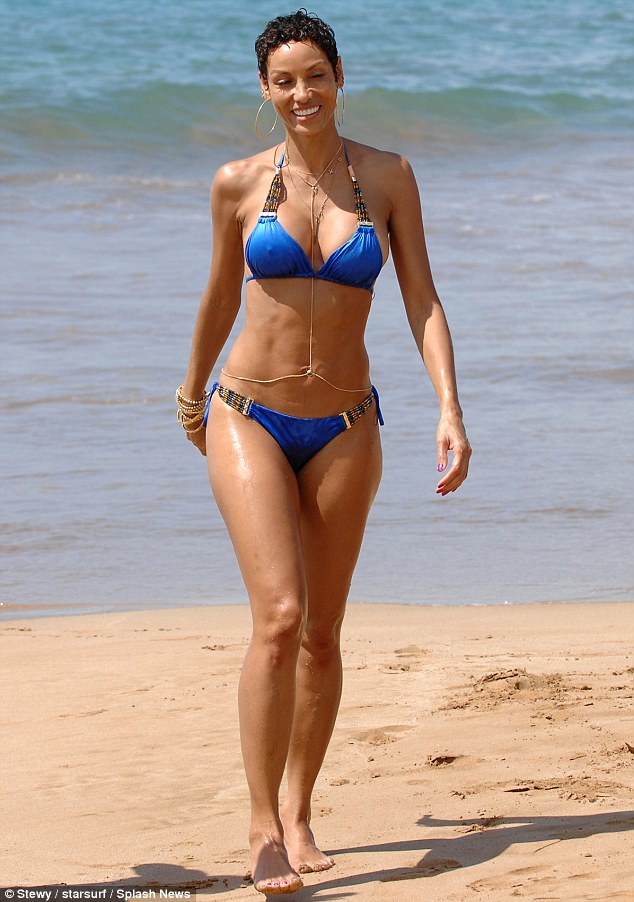 Jaw-dropping: The mother-of-five showed off her flawless figure in a blue bikini with her abs and chest endowed with a simple gold chain

The group of women were filming a segment that involved paddle board lessons and beach yoga on the sunny Sunday in Hawaii.

Nicole was married to Eddie Murphy – who is now dating Australian model Paige Butcher – from 1993 until 2006, and together they had five children.

Appropriately, however, VH1’s website claims that Nicole’s storylines will primarily revolve around her upcoming marriage to Michael Strahan, who currently presents Live With Kelly And Michael. 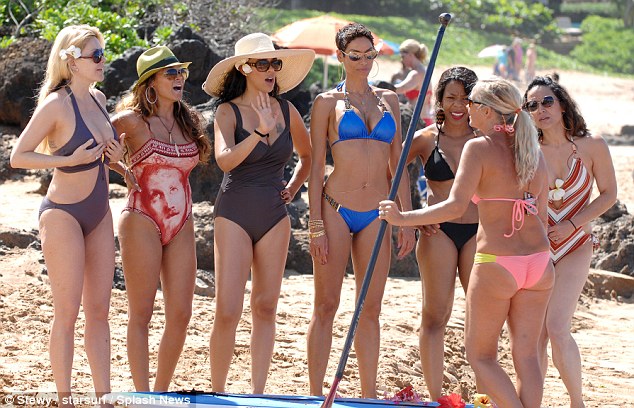 Paddle board lessons: The ladies of the VH1 series Hollywood Exes got a few tips on the sport 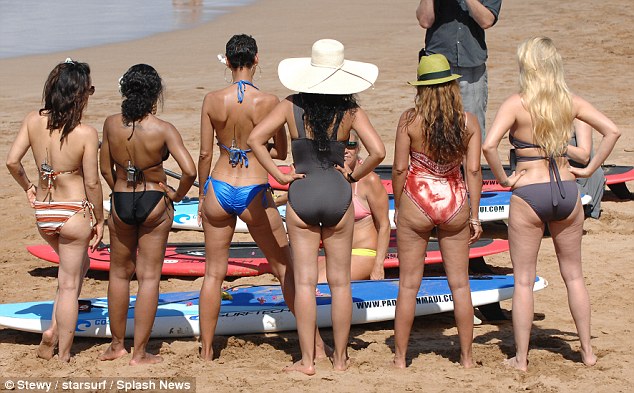 Beach bums: Nicole stood out as the tallest and most outrageously well built in the cast

Loving it: Shanna Moakler showed off her enthusiasm on the seaside set 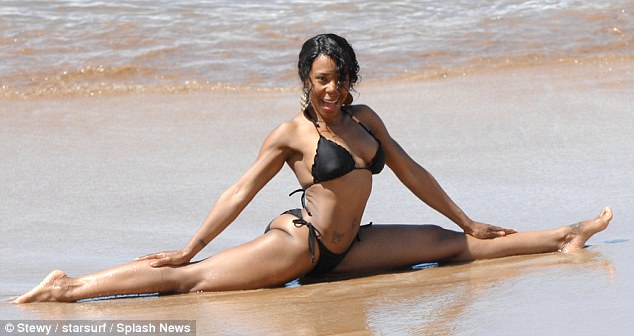 Why’d he break up with her? R Kelly’s ex wife Andrea Kelly showed off her splits skills on the beach 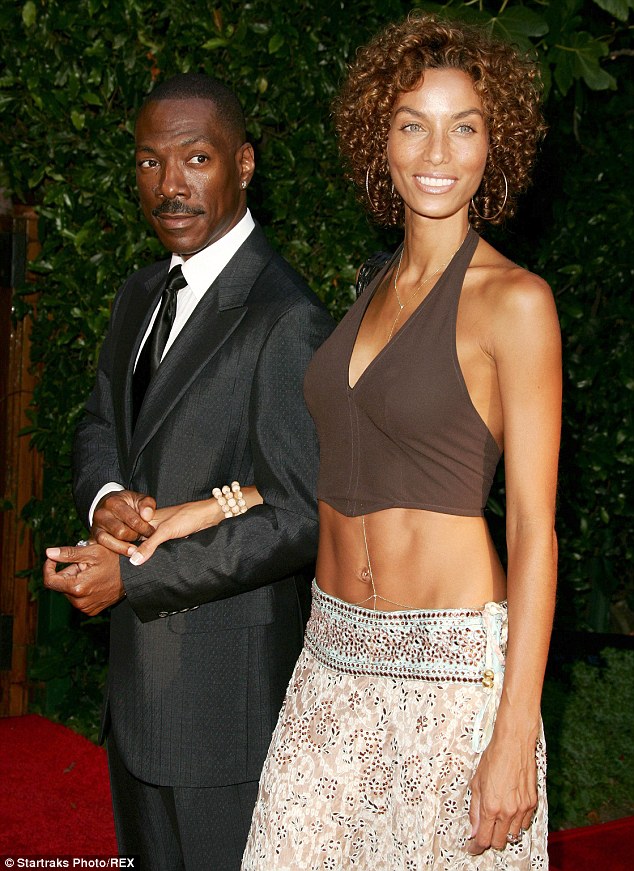 All over red rover: Nicole Murphy was married to Eddie Murphy – pictured here at an event in Los Angeles in 2005 – from 1993 until 2006, and together they had five children