Lanre Gentry, estranged husband of Nollywood actress, Mercy Aigbe has been released from detention after fulfilling his bail conditions.

Gentry, an hotelier was accused of assault and domestic violence by his wife.

He was arraigned before a magistrate court which granted him bail in the sum of N500,000 with two sureties in the like sum.

Both sureties were to show proof of tax payment and own a verifiable house in Lagos with title documents.

He was earlier unable to meet the conditions and was remanded in Ikoyi Prison.

He has however been released.

In an Instagram post, he confirmed his release and has promised to grant an interview to reveal his experience in prison. 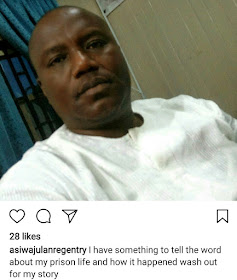