By day, she put her atheltic skills to the test, taking them from the concrete court to a table tennis tournament at Madison Square Park in New York City.

Then on Wednesday night, Serena Williams slipped into a sultry leather dress to attend the Late Show With David Letterman.

Proving her talent for tennis isn’t her only enviable quality, all eyes were on the the 31-year-old sports star as she displayed her firm, athletic physique as she left the Ed Sullivan Theatre in a sleeveless, figure-hugging frock. 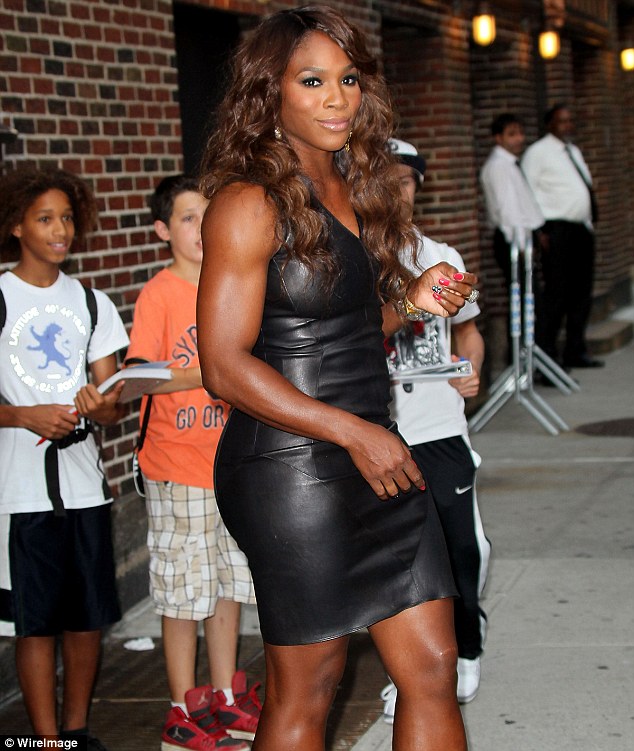 Smokeshow! Serena Williams showed her sassy side in a leather dress as she left the Late Show with David Letterman at the Ed Sullivan Theater in New York City on Wednesday

Yet, the most shocking sight was her silky ‘do, which had completely transformed from her previous look, trading in her lighter, frizzy crimps for curly, lustrous, red-tinted locks.

Serena – who is ranked number one in women’s singles tennis – completed her outfit with a smoky eye, brighter blush, and glittering earrings and bracelets. 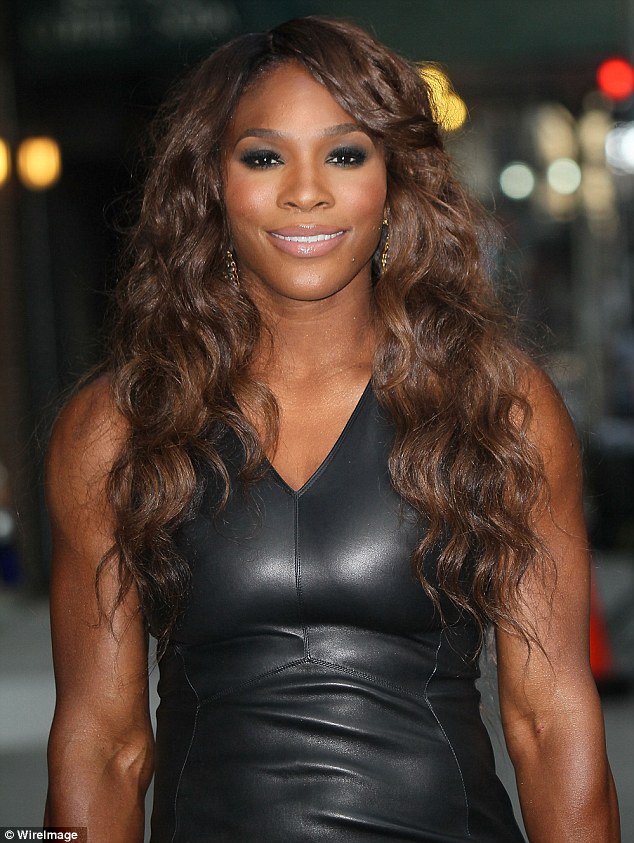 Hair transformation: The star swapped in her lighter locks for a reddish, curly ‘do

Loving the limelight: Serena poses for the cameras

Earlier in the day, the tennis pro donned a sleeveless white blouse and fitted black leggings.

With the event being sponsored by Delta Airlines, she went for stewardess chic look, sporting a pilot-inspired cap over her voluminous tresses.

Adding to her conservative ensemble, the American professional tennis player donned a black blazer with long, leather sleeves and pair of coordinating black flats with bows on the toes.

Her make-up was subtle, highlighting her features with a touch of dark shadow and pink lipstick. 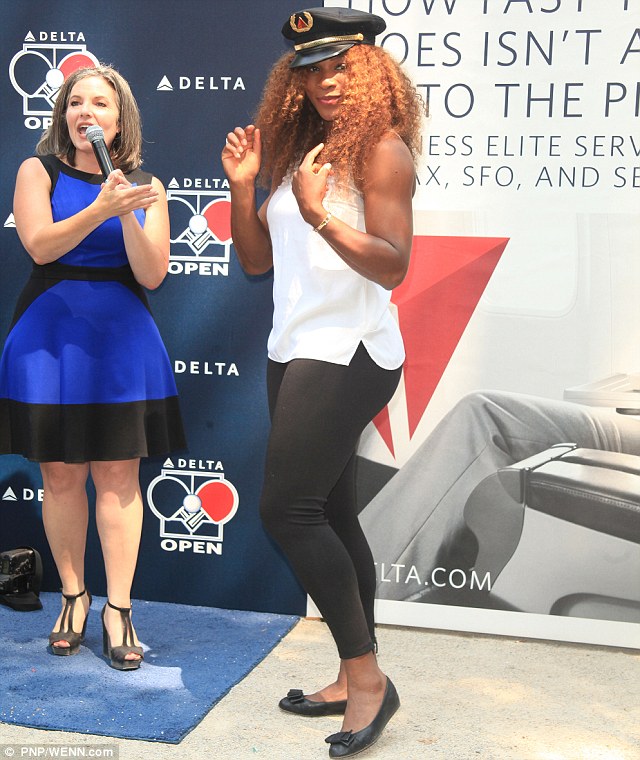 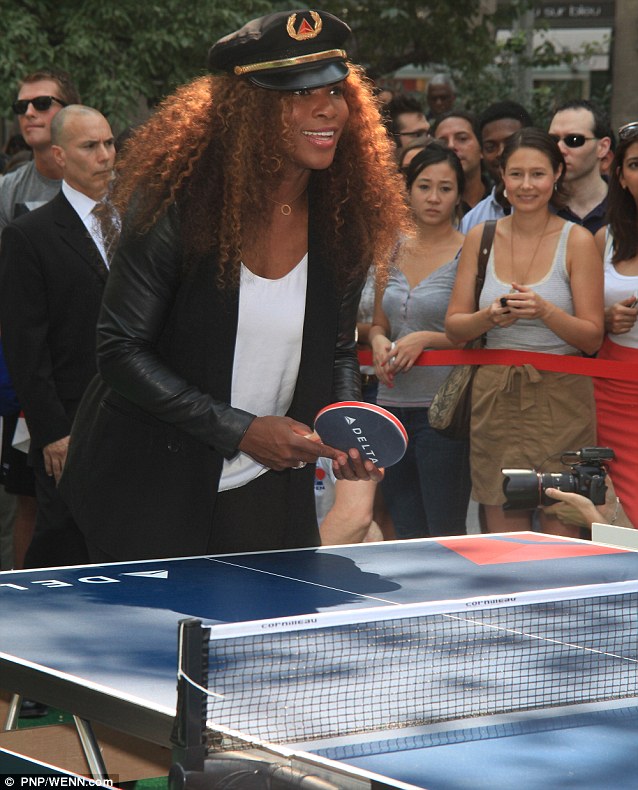 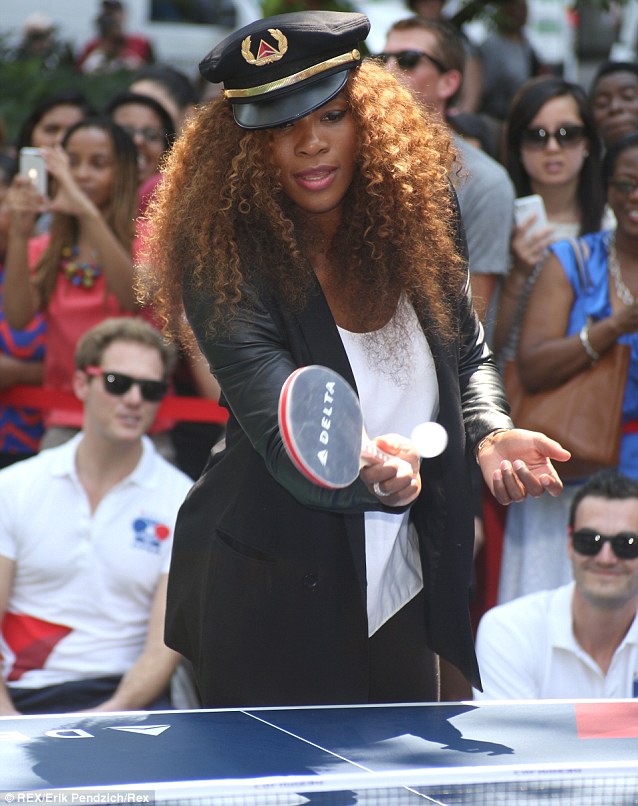 ‘About to get my table tennis on in Madison Square Park against surprise celebrities. Who do you think will win? #AdvantageDelta #DeltaOpen.’ Williams tweeted earlier in the day.

And her excitement certainly showed, laughing and clapping as she put on a performance.

The star even took some time to sign autographs, as a plethora of fans watched from the sidelines. 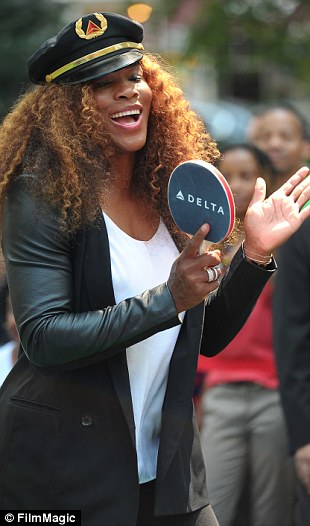 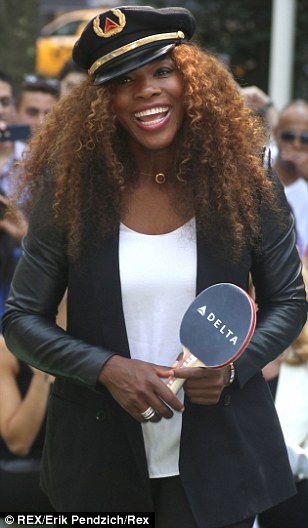 Having a ball! Serena certainly seemed to be enjoying herself 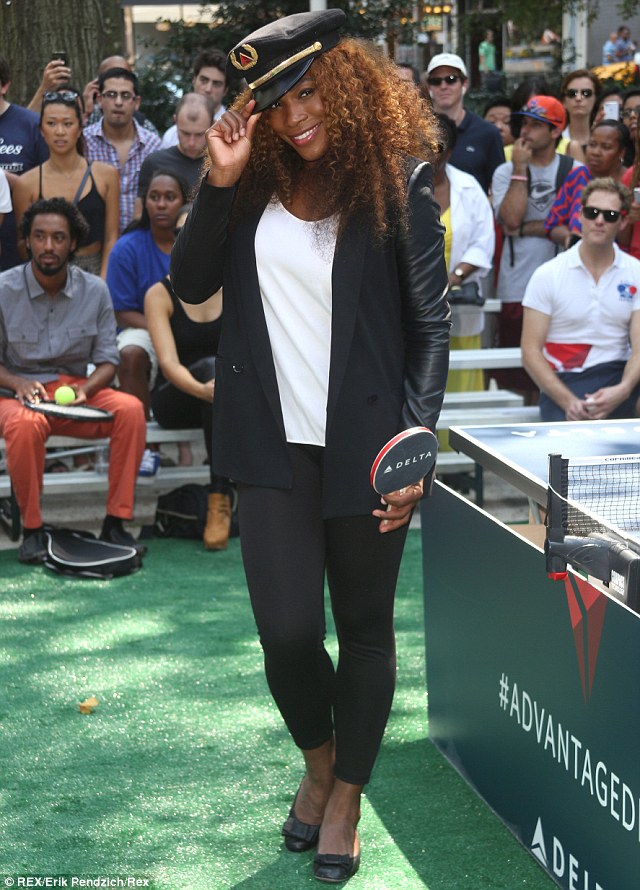 Playing with props: The tennis star opted to wear a pilot-inspired cap to get into the theme

Serena is currently set to advance to the Western & Southern Open singles championship for the first time in her career.

On Sunday, Williams will play second-seeded Victoria Azarenka during the final at the Lindner Family Tennis Center in Mason.

‘I definitely wouldn’t have predicted myself being in the final here at all,’ she recently admitted.

‘So it’s definitely pretty exciting for me. Really unexpected for me too.’ 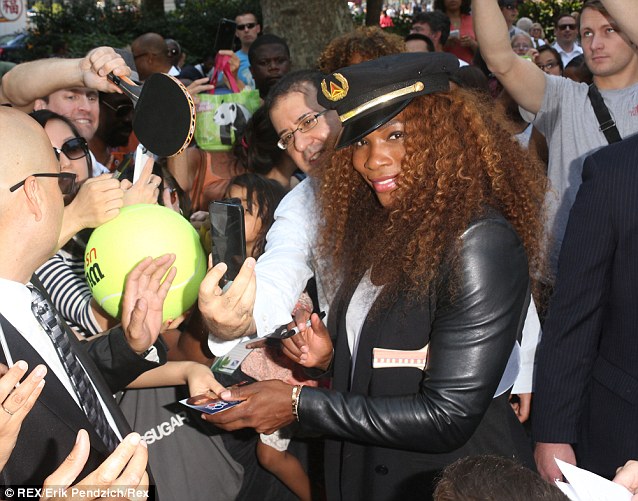 Giving back: Serena didn’t hesitate to sign autographs for fans