Obafemi Martins bashed for not paying respect to his former coach, Stephen Keshi Nigerian International, Obafemi Martins has faced heavy criticism from some disgruntled followers on his Instagram for not honouring his former coach, Stephen Keshi who passed away this morning.

Back to reality ✌?️

The striker who posted a selfie on his Instagram today with the caption ‘Back to Reality’ once said the late coach didn’t ‘like him’as he was frozen out of the national team for a major part of the time the Big Boss was with the Super Eagles.

See what some of his dissatisfied followers are saying: 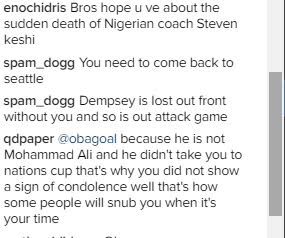