President Muhammadu Buhari will visit London after attending the United Nations General Assembly in the United States, as announced by the Presidency on Friday.

A statement issued by the Special Adviser on Media and Publicity to the President, Femi Adesina, said Buhari who would depart Abuja on Sunday for New York, to join other world leaders at the 72nd Session of the United Nations General Assembly (UNGA 72), would return to Nigeria from London.

The statement reads, “The high point of the President’s visit will be his participation in the General Debate during which he will deliver the country’s National Statement.

“The theme for this year’s Debate is: “Focusing on People: Striving for Peace and a Decent Life for All on a Sustainable Planet.”

“President Buhari will join other world leaders at the welcoming reception to be hosted by the UN Secretary-General, Antonio Guterres, and also hold a bilateral meeting with the UN scribe.

“Equally, the Nigerian leader will hold a lunch meeting with President Donald Trump of the United States, along with other world leaders.

“During the General Assembly, Nigeria will participate in high-level meetings on ‘Prevention of Sexual Exploitation and Abuse: Building Momentum for Change,’ the Commonwealth Heads of Government Meeting, a High Level Event organized by the African Union under its Theme of the Year: ‘Roadmap on the Demographic Dividend: from Commitment to Action,’ among others.

“At the events, President Buhari and members of his delegation will strive to project Nigeria as a strong moral force and responsible member of the international community.

“Nigeria’s commitment to global peace, security and development will also be reaffirmed and where necessary, the need for increased international cooperation in the fight against corruption.

“Other priorities for the Nigerian delegation at UNGA 72 include strengthening human rights institutions; the rule of law; support for Internally Displaced Persons (IDPs) as a result of terrorist acts and recent flooding, and mitigating the effects of Climate Change.

“The Nigerian delegation will also canvass the support of UN member states for the Buhari administration’s efforts towards combatting illicit financial flows in order to foster sustainable development.

“The President will be accompanied by the governors of Zamfara, Ebonyi and Ondo States and key cabinet ministers.”

On the President’s visit to London, the statement said: “The President Buhari will transit through London on his way back to the country.” 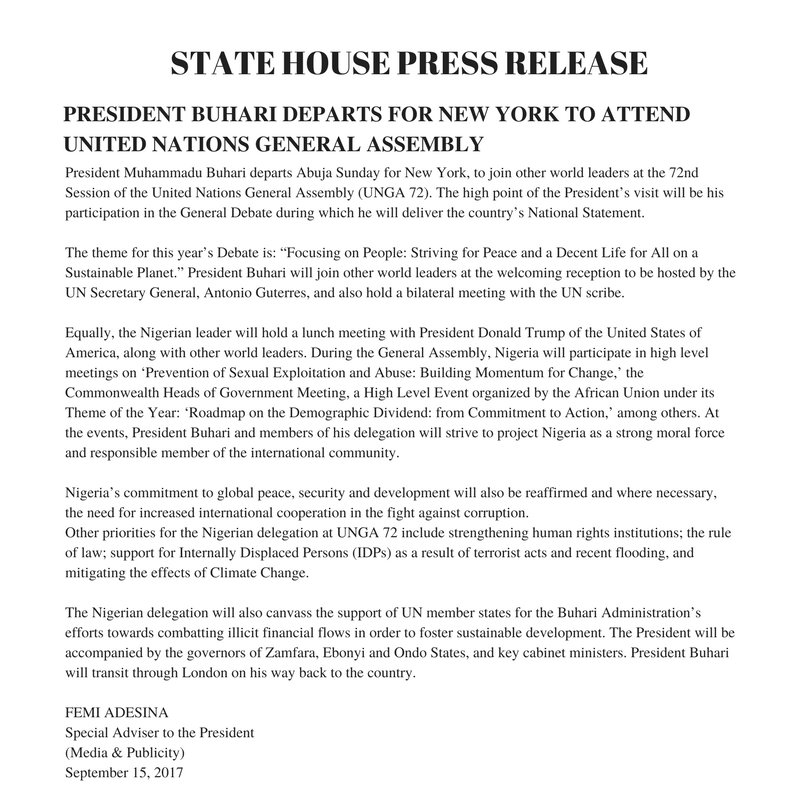