Rihanna turns up the heat, posing semi-nude with glass of wine (PHOTOS)

She recently bared all for the cover of her seventh studio album Unapologetic and again when she fronted GQ magazine.

But keen to show her figure off some more, Rihanna has stripped off again in a series of saucy Twitter pictures.

Photographed by her best friend Melissa Forde, the 24-year-old Diamonds singer just about manages to retain her modesty as she strikes a pose. 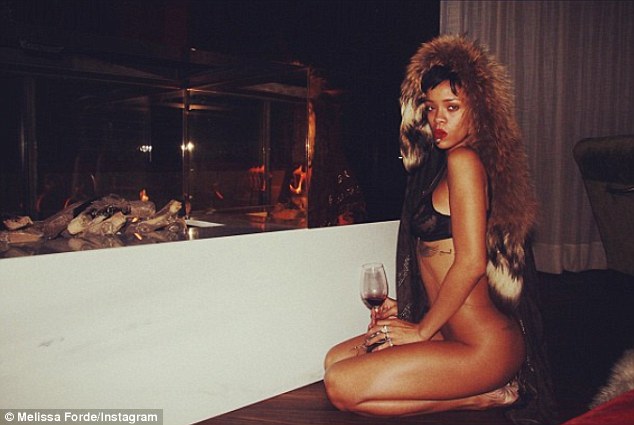 Racy: Rihanna has taken part in another nude photoshoot wearing nothing but a bra and a hooded jacket

In the first picture, which Forde uploaded to the micro-blogging site via her Instagram account, a bare bottomed Rihanna eyes the camera lens as she kneels.

Holding her glass of wine in her hand with a cigarette in her mouth as she pouts, Rihanna shows off her bed eyes and part of her freshly cropped black hair.

With a coating of scarlet lipstick completing her look, the caption on the image reads: ‘Sneak peak new photoshoot @rihanna #MTFphotography’. 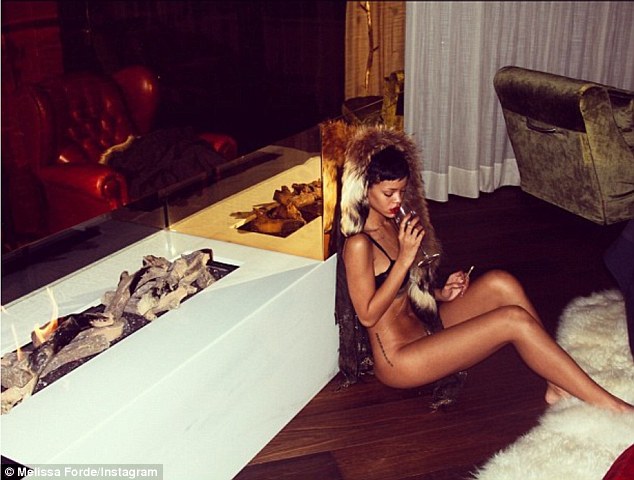 Enjoying a quiet drink: Rihanna took a sip of wine from her glass as she turned away from the camera

In the second snap, Rihanna raises the temperature as she looks away from the camera while taking a sip of wine from her cup.

Wearing just a black lace bra with a fur hooded coat over her head, the Barbados born star stretches her feet out onto a fur rug.

Showing off one of her 18 tattoos, Rihanna rests her back against a fire place as she holds a cigarette in her other hand.

Getting more creative with her descriptions, with the second image Melissa tweeted: ‘Who needs fashion when there’s p**** @rihanna #MTFphotography’.

Following her performance on the German television show Wetten, dass…? on Saturday, Rihanna will be jetting into Manchester for a performance on The X Factor.

The Rated R songstress will be taking centre stage during the live final on Sunday just two weeks after she performed her hit song Diamonds on the ITV show, in which viewers saw her get drenched.