Robbie Savage: 5 reasons why Arsenal can win the title

But, with four months of the season remaining and 17 games left, these are the reasons why Arsenal are leading the way at the moment, and why they will push City and Chelsea all the way.

I was at Villa Park for BBC Radio 5 live and saw for myself why the Gunners are back on top of the table, and serious title contenders this season.

Arsenal were completely dominant for 75 minutes, until Christian Benteke pulled a goal back. Then we saw the other side of Arsene Wenger’s side, when they had to battle to protect their lead – which they did.

They have been brilliant this season but will they win the title? I still say no. Manchester City remain my choice, and I think Chelsea will run them closest.

But, with four months of the season remaining and 17 games left, these are the reasons why Arsenal are leading the way at the moment, and why they will push City and Chelsea all the way.

Work-rate to win the ball back

I already knew before the Villa game that Arsenal are excellent when they are in possession.

But, at Villa Park, they were just as good when they did not have the ball.

Arsene Wenger’s Arsenal have not won a trophy since 2005

There were plenty of examples of how this helped them defensively on Monday night, such as in stoppage time at the end of the first half when Olivier Giroud gave the ball away near the Villa box, then ran back 60 yards to make a tackle where you would expect his left-back to be.

Giroud was not the only one. Arsenal kept the ball superbly before the break, but they also tried to get it back as quickly as possible when they lost it.

That intensity also helped them going forward, especially with their second goal – which came straight after their first.

They went straight at Villa from the restart, with Jack Wilshere forcing Fabian Delph into a mistake and, from Wilshere’s ball, Giroud made it 2-0.

The Gunners lost some of their intensity in the second half, when they were happier to let Villa have more possession.

They took their foot off the gas, but they were still in total control of the game until Andreas Weimann came on in the 73rd minute, and Benteke’s goal set up a far more frantic finish than was expected.

Surprisingly solid at the back

Arsenal – with Mertesacker and Koscielny since 22 Jan 2012 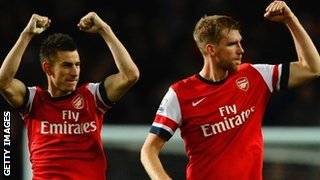 In the past few years, if you put the pressure that Villa did on the Arsenal defence, then it usually cracked.

But Wenger’s side had already showed over Christmas that they are more resilient now, with a determined defensive display helping them beat Newcastle, and it was a similar story in the last 15 minutes on Monday.

Along with Chelsea and Everton, Arsenal have got the joint-best defensive record in the Premier League after conceding only 19 goals in 21 games.

That is not something I expected at the start of the season when Villa beat Arsenal at The Emirates on the opening day.

But Per Metesacker and Laurent Koscielny have formed a very effective partnership and it is coming up to two years since Arsenal lost a game where both of them played 90 minutes, a 2-1 home defeat by Manchester United on 22 January 2012.

Mertesacker is not the quickest but he reads the game so well and he is also not afraid to put his head in where it hurts.

Against Villa, he covered the near post so well and was completely dominant in the air. The only time he was beaten was for Villa’s goal, when Santi Cazorla gave the ball away and Matt Lowton put in the best ball I have seen this season.

A class act in the middle

Villa ended up playing three different formations on Monday – they started in a 5-3-2 shape, switched to 4-4-2 when Nathan Baker was injured and then turned that into a 4-3-1-2 in the second half.

But, whatever shape Villa chose, Arsenal adapted and found gaps for their passing triangles when they had the ball and stopped Villa from playing when they did not.

Even though Theo Walcott is out for the rest of the season, midfield remains Arsenal’s strongest department in terms of quality, versatility and depth.

After 21 games, Wenger has only started the same set of five players in consecutive Premier League games twice – Mathieu Flamini, Wilshere, Serge Gnabry, Mesut Ozil and Aaron Ramsey against Stoke and Swansea, and Wilshere, Cazorla, Arteta, Ozil and Ramsey against Southampton and Cardiff.

I have said before that, when they do not have their fast, naturally wide players like Walcott, Alex Oxlade-Chamberlain and Lukas Podolski available, Arsenal lack pace and width.

Walcott will miss the World Cup with his knee injury

As for his other attacking midfielders, well Wenger has been interchanging them for the last few months and I am sure they will continue to do the same.

Ozil, Cazorla, Tomas Rosicky, Ramsey, Arteta and Wilshere are all dynamic players, who are comfortable in possession and have got a bit of pace too.

A forward line to be reckoned with

Giroud leads the Arsenal attack but, when they go forward, there is far more to the Gunners than just the Frenchman.

They are a front four, and any of the attacking players I mention above can fit into that front four.

Giroud was not always the furthest man forward against Villa because he rotated out to the right and Ozil came into the centre-forward position.

Even when the ball was played up to Giroud, Ozil, Cazorla and Gnabry were always looking to run past him, and Wilshere did that more and more as the game went on too.

I have been saying all season that they need a new centre-forward, somebody who is better than Giroud, or even somebody who is good enough to fill in when he is injured.

At the moment that is a hypothetical situation. Giroud keeps scoring and he has pretty much kept fit too.

Yes, he has missed three games after Christmas with an injury but the Gunners kept on winning without him.

Even so, with the transfer window open, I think Wenger has to act. Signing another top-class centre-forward, in case Giroud gets injured, could make the difference between finishing first and third.

Beating the big boys, and do they have to?

Against the other teams in the top seven, Arsenal have lost to both Manchester teams and been held by Chelsea and Everton.

Compared to how they have got on against lesser teams in the top flight, they have struggled, but the thing to remember is that they have beaten everybody else, and that is why they are top of the table.

After 21 games, they are also still in the Champions League and still in the FA Cup but, because they have not won a trophy for so long, people are not convinced they will go the distance.

For people to take them deadly seriously, what they need is a defining result against one of the other teams in the top four or five.

If they do that, it might mean their players start to believe they can win the title too.

Read this article on BBC Sport