A devastated family today spoke out about losing a wife and mother shortly after she gave birth to a baby boy.


The mother-of-three cradled her premature newborn just once before she was taken to theatre to have routine surgery to remove her placenta. Tragically, she died just hours later. 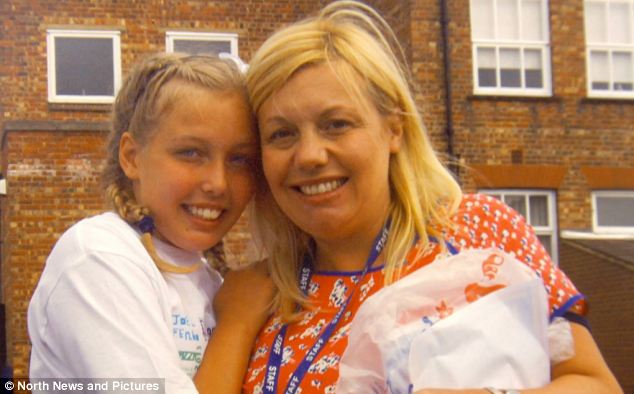 Joanne (pictured, right, with daughter Connie) had just 20 minutes with her new son before she was sent for routine surgery to remove her placenta. She died just hours later, leaving her family behind

Earlier this month, Mrs Jones kissed goodbye to her husband, Anthony – after passing on news of the healthy new arrival to their two delighted daughters on the phone – and underwent the operation.

But 40 minutes into the procedure doctors at the University Hospital of North Tees, in Stockton, returned to the room where Anthony, 33, was with 5lb 4oz baby Riley, and revealed that Mrs Jones had suffered a cardiac arrest.

Despite doctors finding a pulse and managing to stabilize her condition for several hours, Mrs Jones suffered a heart attack nine hours later.

Today Mrs Jones’ heartbroken family paid tribute to the ‘best mam in the world’ and told how they will one day tell baby Riley all about her. 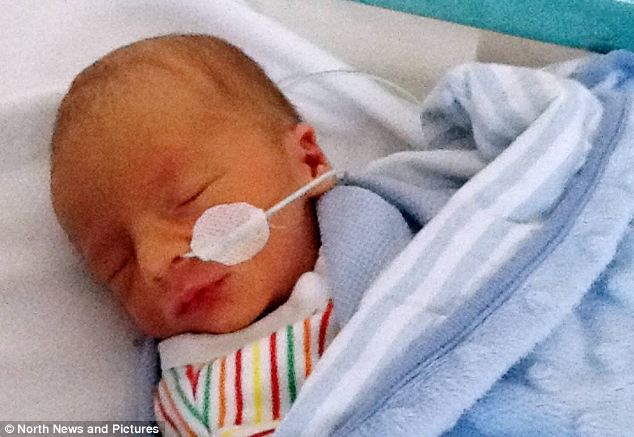 Baby Riley (pictured) was born prematurely at 4:50pm on August 13. His father, Anthony, said: ‘She would have idolised Riley, she fought to get that baby out safe. She would have wanted him to live instead of her, I’m just glad that she got to see him’ 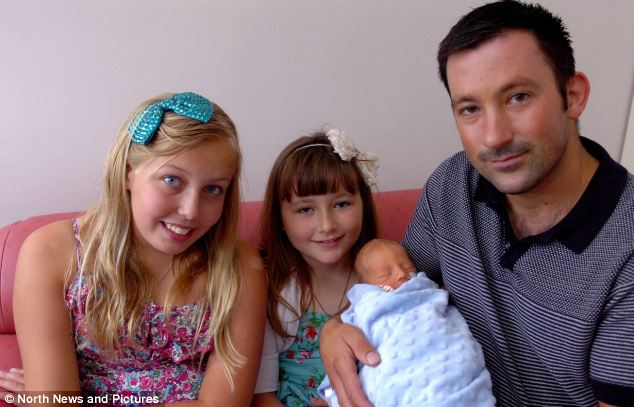 Husband Anthony (pictured holding baby son Riley and next to daughters Connie [left] and Millie[centre]) said: ‘Joanne was the backbone of our family and it sounds cliched, but she really was the best mam in the world’

Mr Jones, a self-employed plasterer from Hartlepool, said: ‘I don’t think it will ever sink in.

‘I’m just so glad Joanne got to hold Riley after he was born even if it was just for a short time, she had him on her chest.

‘I got pictures of him like that but none of her holding him because I didn’t think she wouldn’t be coming back. She saw me with him as well, she did that for us.’

He added: ‘Joanne was the backbone of our family and it sounds cliched, but she really was the best mam in the world.’

Mrs Jones’ mother Dianne Baker, 56; father Jeff Baker, also 56, and sister Naomi Baker, 27, a shop assistant, each said how proud they were to have her as a daughter and sister. 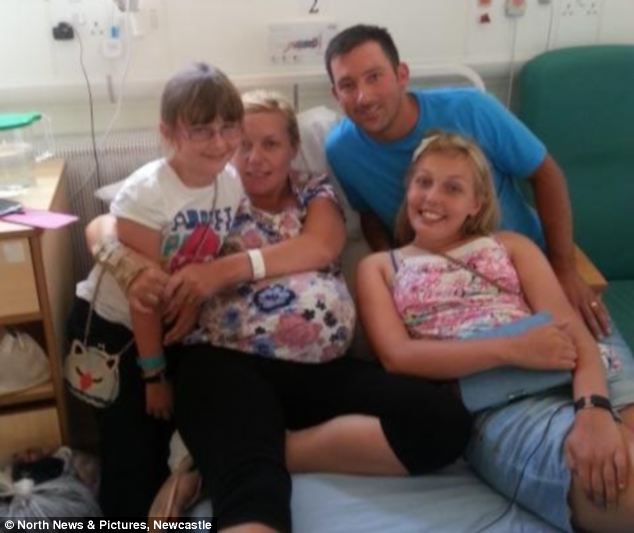 Joanne is pictured shortly after her waters broke on a family trip to Butlins in Taunton. Doctors at the hospital decided to keep Riley in the womb and prescribe Joanne antibiotics for any potential infection

Mrs Baker said: ‘She really wanted to give us our grandson because we’ve never had a boy in the family.

‘She would have idolised Riley, she fought to get that baby out safe. She would have wanted him to live instead of her, I’m just glad that she got to see him.’

Mrs Jones, a teaching assistant and nursery teacher, suffered complications during her pregnancy.

She discovered she was pregnant at New Year after planning the baby and coming off medication she was on for rheumatoid arthritis, a condition she had suffered from since the age of 21.

During a routine 20-week scan, doctors told the couple that Joanne’s placenta was ‘low-lying’, which meant she may have had to have a Caesarian birth unless it moved to a safer position. 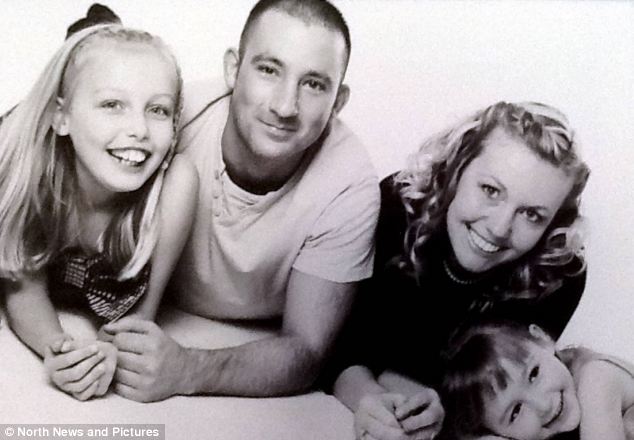 Joanne (pictured with husband Anthony, daughter Connie, left, and Millie, right) was ‘such a special wife, mam, daughter and sister’

However, the placenta eventually rose back to a safer position.


On July 22, the family took a trip to Butlins, Minehead, to celebrate the eighth birthday of their youngest daughter Millie Jones.

But on the second day, Joanne’s waters broke – two months before her due date – and she was taken to a hospital in Taunton where doctors decided to keep Riley in the womb and prescribe her antibiotics for any potential infection.

Joanne, a former Manor school pupil, was then transferred by ambulance to the University Hospital of North Tees where medics discharged her on July 29 and ordered her to return every few days for routine checks.

On August 9, Joanne complained of a pain in her side, but hospital doctors could not find anything wrong.

Three days later, on Monday last week, Joanne started bleeding and Anthony rushed her back through to North Tees hospital where doctors decided to induce her for a natural birth.

Baby Riley came into the world at 4.50pm the next day, on Tuesday, August 13, and at 2am the following day Joanne died. 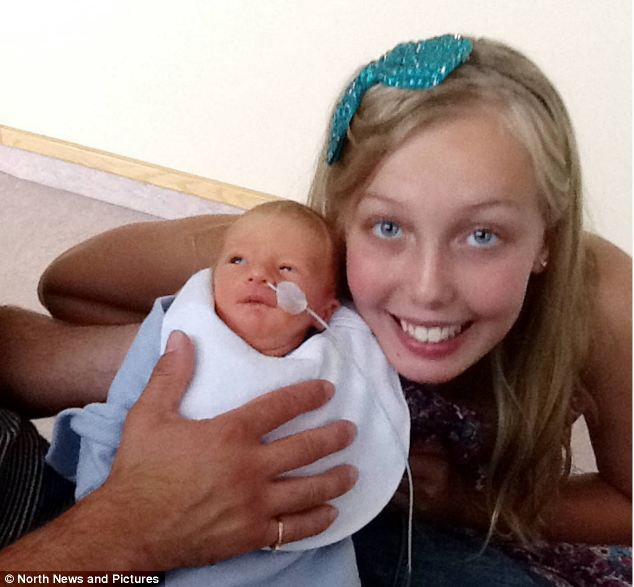 Connie, pictured brother Riley, said: ‘We’ll tell Riley all about our mam when he’s older. She was very generous and she would always help people. We had brilliant games of pool and me and my mam were the ‘blonde bimbos’ and Millie and dad were the ‘dark destroyers’. She was a brilliant mam’

Mr and Mrs Jones’ daughters Connie Letts-Jones, 11, and Millie – who attended the school where their mum worked – wanted to speak about her.

Connie, who is due to start English Martyrs School in September, said: ‘We’ll tell Riley all about our mam when he’s older. She was very generous and she would always help people.

‘We had brilliant games of pool and me and my mam were the ‘blonde bimbos’ and Millie and dad were the ‘dark destroyers. She was a brilliant mam.’

Millie added: ‘When we had homework she would always help us. She wasn’t scared of anything, but she wouldn’t like leaving everyone.’

Mr Jones, who married Leeds University textiles design graduate Joanne at St Patrick’s Church, in Owton Manor Lane, nine years ago, said: ‘It’ll be a while before I go back to work. Luckily Joanne’s got me well trained so I can look after us.

‘Joanne, we were so privileged to have such a special wife, mam, daughter and sister. Sleep with the angels.’

Riley’s third name was changed from Anthony to Jo to be like his mum, who also leaves behind mother and father-in-law Kevin Jones, 59, and Denise Jones, 56.