She opted to miss her aunt’s funeral so she could jet to Britain to support Brad Pitt at the premiere of his new movie World War Z.

And Angelina Jolie certainly did it in style on Sunday evening as she made one of her first public appearances since she revealed to the world she recently underwent a double mastectomy.

The Salt actress kept to her promise and was one of the big names who walked the red carpet at the event. 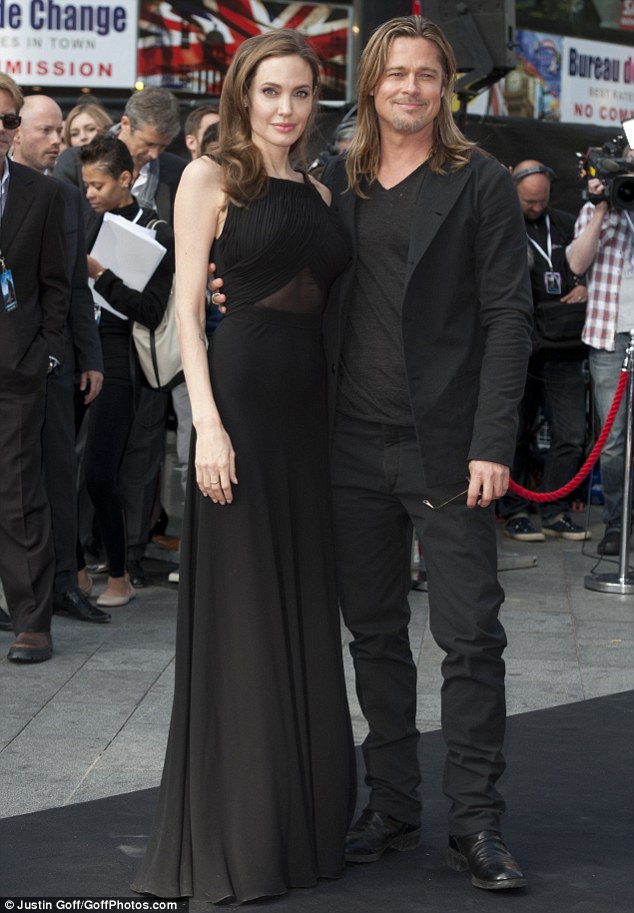 Supportive: Angelina Jolie goes ahead with missing her aunt’s funeral as she turns up to support Brad Pitt at the premiere of his movie World War Z in London on Sunday evening

The 37-year-old opted to co-ordinate with her man as they both arrived to rapturous claps and cheers, both wearing matching black.

Angelina wore a floorlength dress, while Pitt looked dapper in a suit with a casual T-shirt underneath.

Just a few days ago it was revealed Jolie had chosen to miss her aunt’s funeral as it clashed with the premiere. 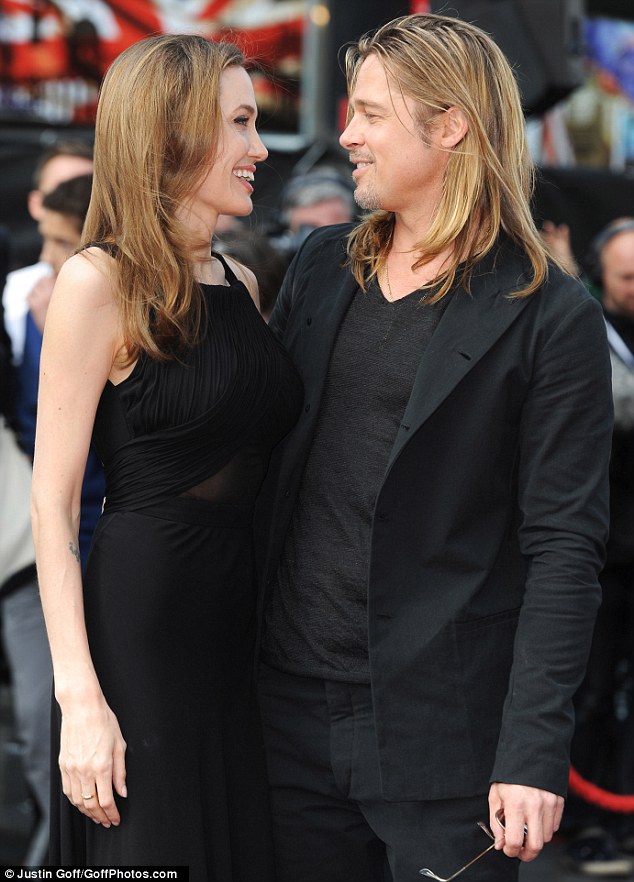 Closer than ever: Angelina recently stunned fans by revealing she has undergone a double mastectomy after being told she carries the BRCA1 cancer gene 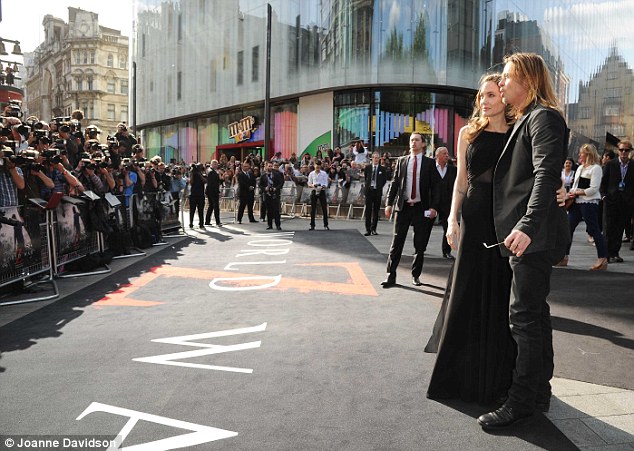 Big cheers: The couple were met with rapturous applause as they made their way to the Empire cinema in Leicester Square 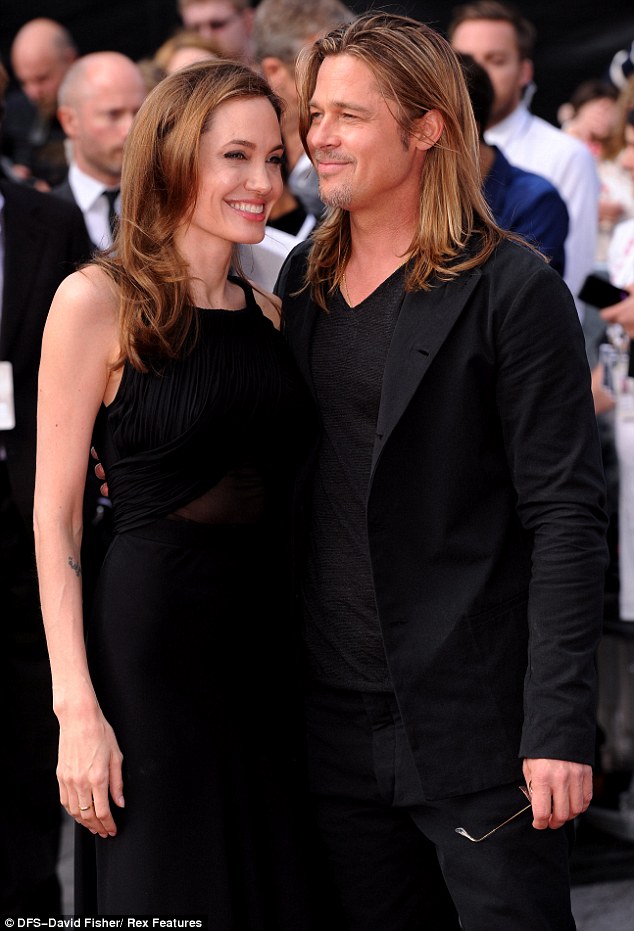 Together: The Salt actress lost her aunt Debbie Martin, 61, last week following a battle with breast cancer just a fortnight after undergoing her own operation

The Salt actress – who recently revealed she underwent a double mastectomy after she was identified as carrying the BRCA1 cancer gene – lost her aunt Debbie Martin, 61, last week following a battle with breast cancer but Angelina cannot make the funeral in San Diego on Sunday June 2 because she will be in London.

Debbie’s husband Ron told E! News ahead of the premiere: ‘We are making the final arrangements for the funeral as we speak. But we expect it to be this Sunday at noon at El Camino Memorial in Sorrento Valley near our home.

Brave face: The Hollywood star decided to fly to London with Brad while the funeral was going on so she could support him at the premiere 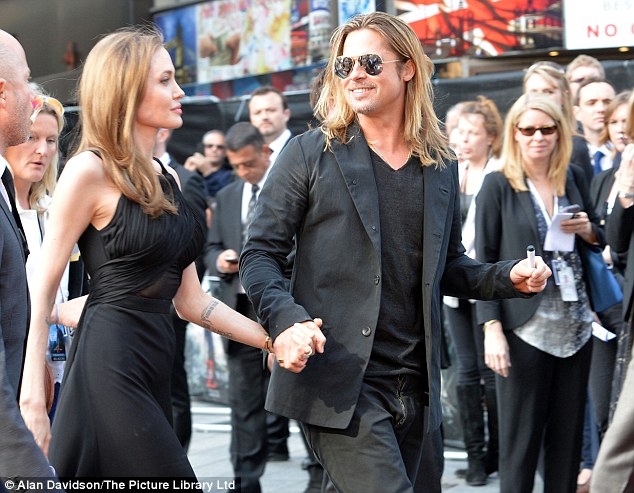 In sync: Both Angelina and Brad held hands and smiled widely as the fans met them with loud screams on Sunday evening

‘Angelina will be in London on Sunday so she won’t be able to attend but she has been in touch with us and with various other members of the family, which has obviously been lovely and has meant a lot to us.’

And it seems Angelina is now fighting fit after making the difficult decision to undergo the operation.

Jolie, who oozed confidence at the bash, said she was ‘feeling great’ as she walked the black carpet with Brad Pitt. 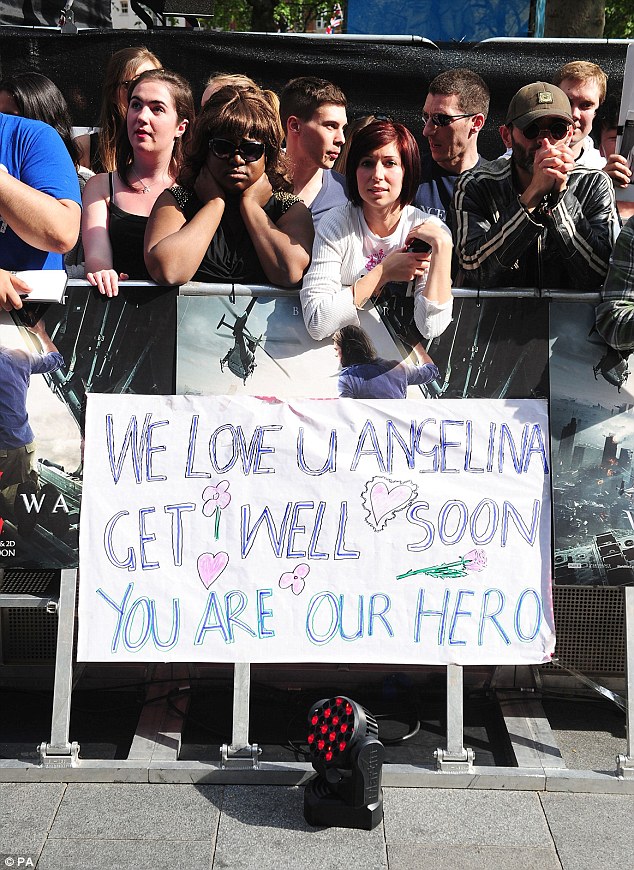 ‘Our hero’: The fans gathered around to give Angelina a warm welcome as she opened up about her recent surgery 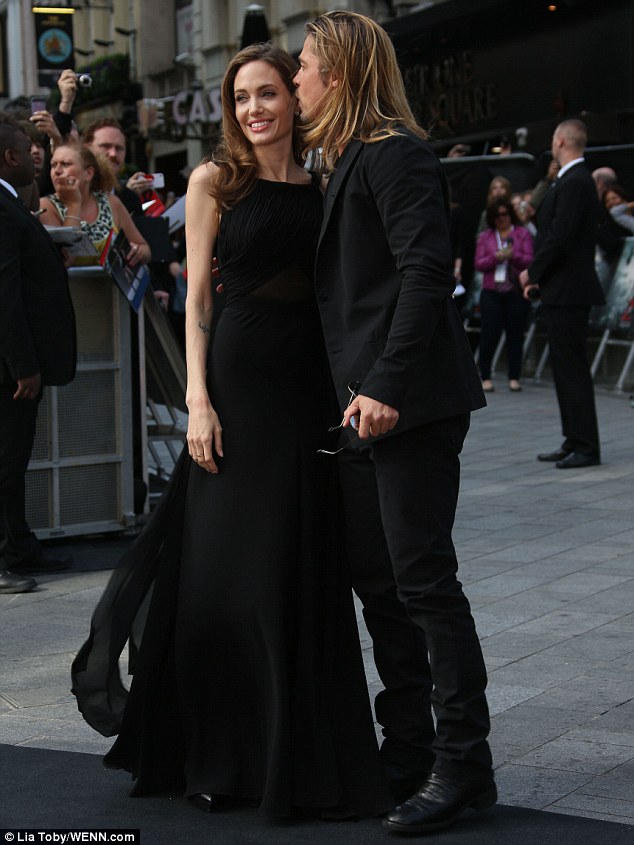 ‘So proud of him’: Angelina told reporters on the black carpet that she was there to support Brad and ‘felt good’ after her recent health scare 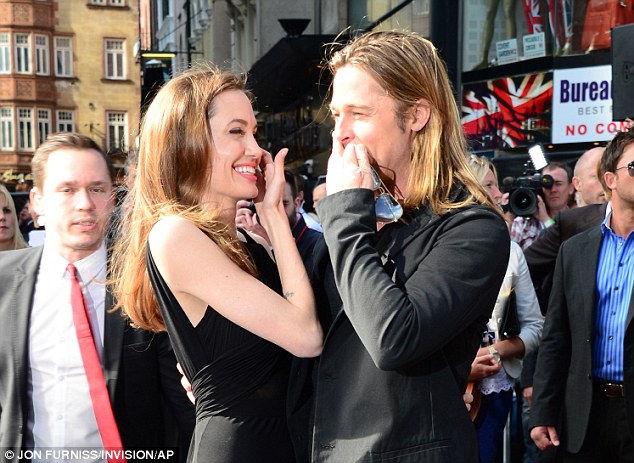 Big smiles: Jolie’s pride was evident as she ensured she supported Brad at the world premiere of his movie

The actress said she was ‘proud ‘ of the response to her article about cancer preventative surgery.

‘If it did some good then I’m pleased’, she said as she walked into the Empire cinema wearing a floor length Yves. St Laurent black silk gown.

The actress spent twenty minutes singing autographs. She joked, ‘I’m a director’, as she took cameras from fans and took their photographs and video shots. 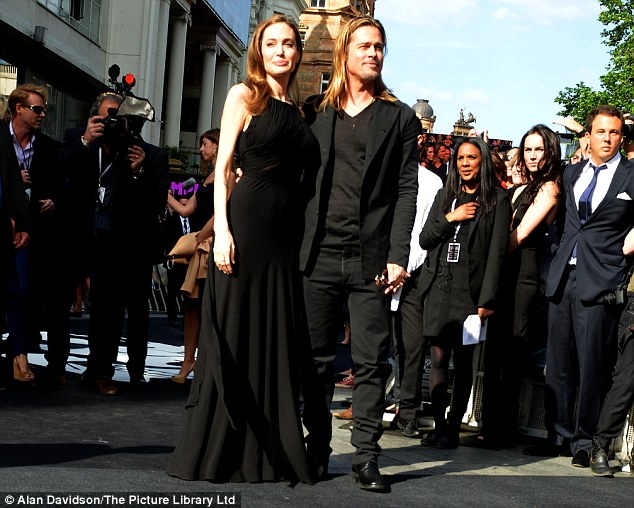 Ode to her aunt? Both Angelina and Brad wore black, while the carpet was turned black on the day of her aunt’s funeral 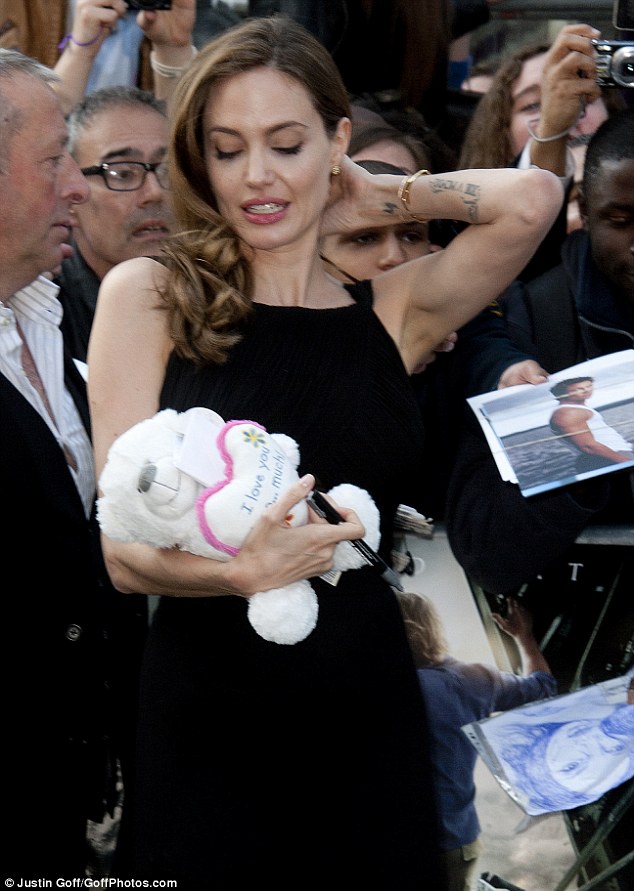 Feeling the love: She made sure she greeted the screaming fans, who lavished her with gifts during the evening 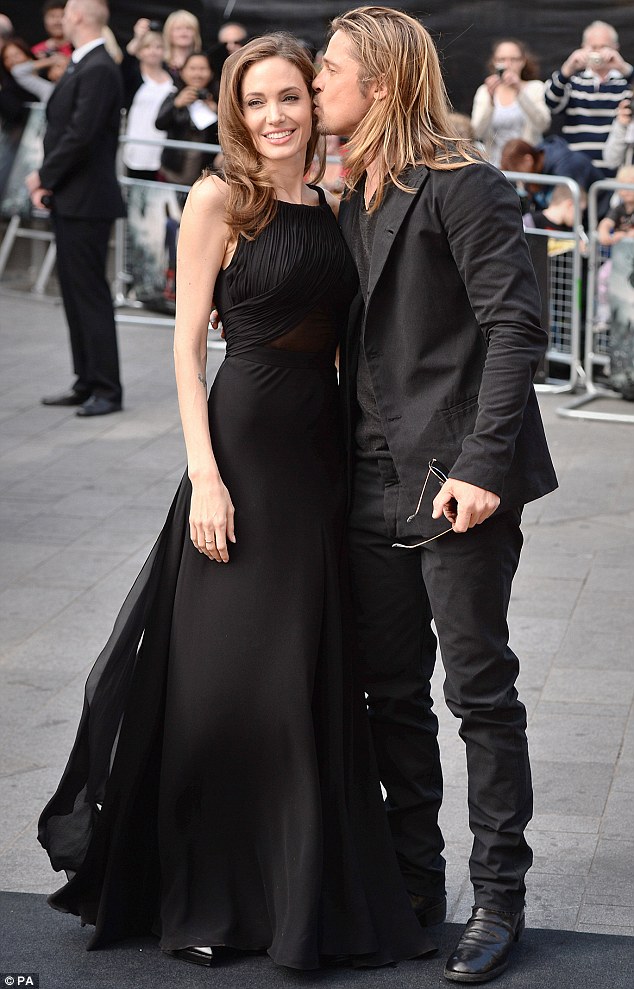 United: Angelina grinned as Brad planted another big kiss on her cheek, showing off his delight at her being there 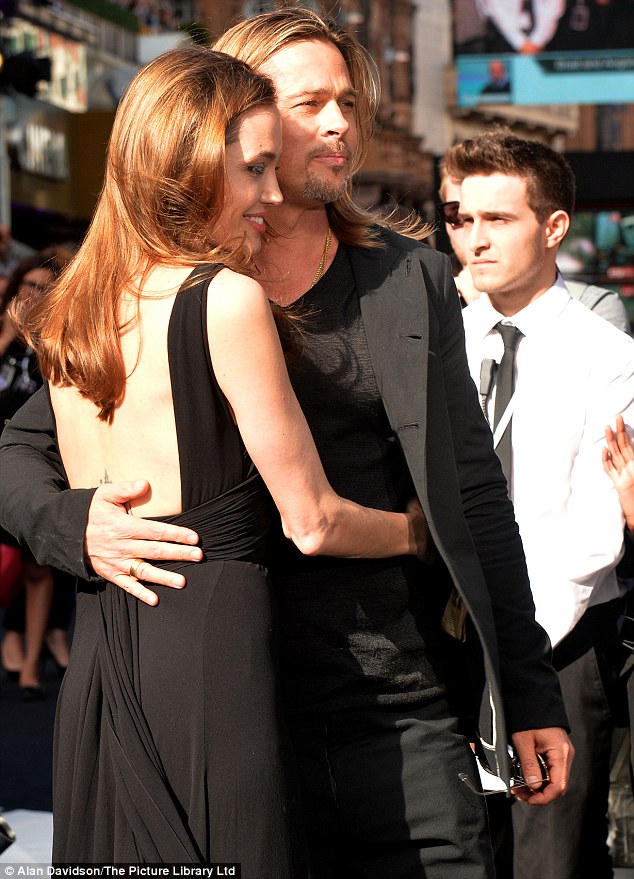 Close: The pair couldn’t keep their hands off each other as they greeted their fans and posed for photographs

One fan handed her a fluffy teddy and later she gave it to Sophie Martinez, aged four, who promptly burst into tears.

Sophie’s parents Douglas and Tatiana, Brazilian students living in Putney, said they were so touched by Angelina’s gesture towards their daughter. 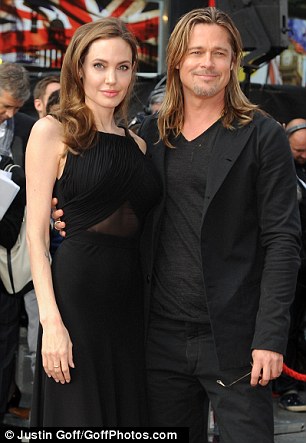 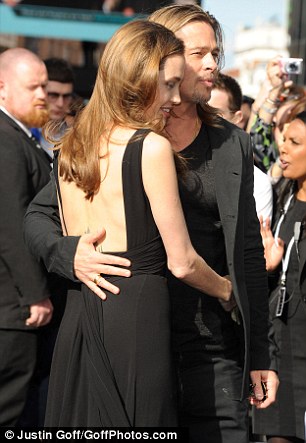 ‘I feel great’: It’s the first public appearance Angelina has made since undergoing the double mastectomy and she told reporters she was feeling good since the op

Jessica Chastain, however, skipped the carpet to attend the film. She and Brad were in The Tree of Life together.

Pitt told BBC News as he spoke ahead of the screening: ‘I think it’s pretty much the most intense film you’re going to see all summer.’

The night before on Saturday Brad made an impromptu visit to the first preview screening of World War Z in one of the Empire’s smaller screening auditoriums. 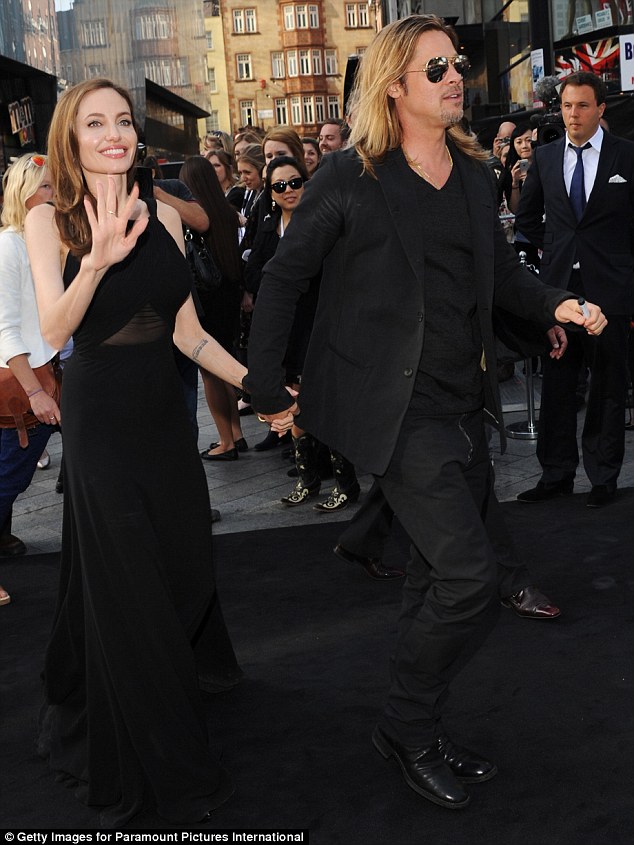 Strutting their stuff: Brad looked cool in his aviator shades as they arrived at the cinema together 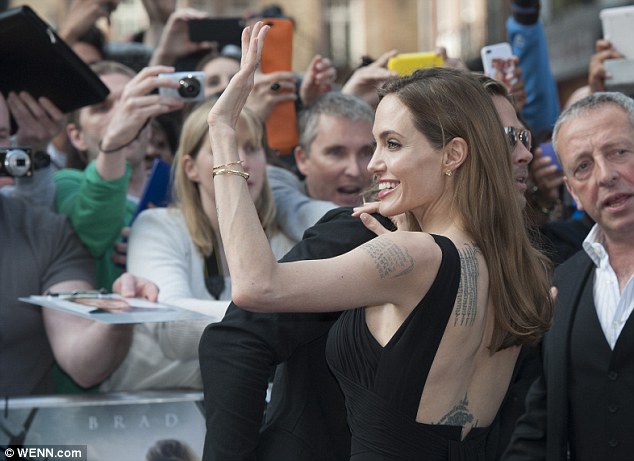 Healthy and happy: Angelina looked on good form and spoke of ‘proud’ she is of the response to her article about cancer preventative surgery 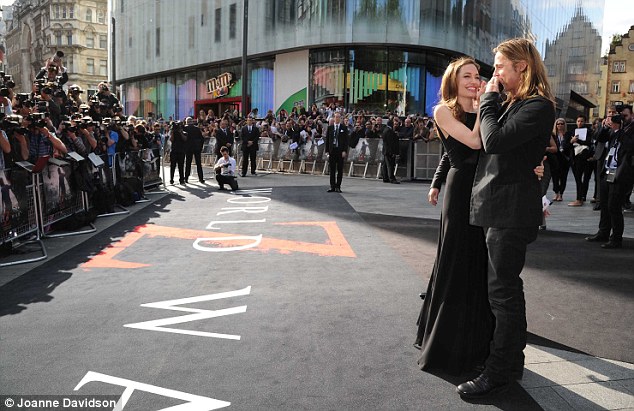 Packed out: Hundreds of fans crammed into the area to try and get a glimpse of the Hollywood stars making their big appearance together

He told the audience: ‘This has been a long time coming’.

He was clearly referring to the film’s problematic production with costs rumoured to be in the two hundred million dollar plus range.

He added: ‘I’m willing to bet that this is the most intense film you’ve seen all summer.’

He wasn’t wrong there! 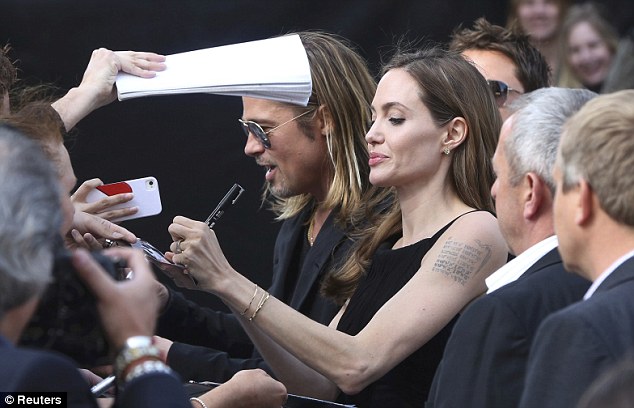 Greeting her fans: The couple made sure they spent time working their way around the crowds to hand out autographs

This reporter found himself grabbing his son’s arm when the gruesome got even grosser.

But, then it’s a Zombie movie with a capital Z. Those living dead dudes sure know how to make you sit up in your seat with a jolt.

To be sure, some of the dialogue is cheesy summer fare like hero Brad’s screen wife, played by Mirelle Enos intoning, ‘I remember what it did to you last time’, as she pleads with hubby not to go off and battle the Zombies.

Yet it’s not the mega-flop poor old Paramount Picture had feared.

Nor is it the worst movie ever made as some would have had us believe.

Often it’s possible to sit through a summer blockbuster without having a clue as to what was happening on screen. Not so WWZ. The plot’s comprehensible.Dunderheads could follow this film.And, let’s be honest, these summer movies are made for dunderheads.

WWZ has turned out to be the summer’s biggest surprise.

It’s going to be a smash, too.

Brad admitted that it’s ‘going to be the scariest movie of the summer’ but he was happy for two of his brood to watch it.

Maddox,11 and Pax, 8, arrived at the Empire, Leicester with nannies and assistants.

The two children mixed with friends at a pre-screening champagne reception.

by Otonyesia Fubara-Manuel Let’s talk about that moment when you are overwhelmed with sadness and you are lonely, what do ...