As Nigerians kick after seeing pictures of service chiefs attending Muhammadu Buhari’s campaign rally tagged ‘Next Level’, the President’s spokesperson, Garba Shehu has reacted saying they attended the event on the premise that it was to showcase the achievements of the administration.

He said this on Twitter, adding that they left even before the President arrived the venue of the event.

“They were mistaken in their assumption that this was a non-political event, to showcase the achievements of the administration, the success of which they are a part.

“Hardly were they seated than did the Minister of Defence, Brigadier General Mansur Dan AlI (Rtd) ask them to leave as this was a political gathering.

“They quickly left, even before the arrival of the President and for the event to get underway. The fuss over this in therefore absolutely unnecessary.”

This comes after the main opposition People’s Democratic Party (PDP) “condemn unequivocally, attempts by President Muhammadu Buhari to politicize and compromise our military by dragging in Service Chiefs to attend and participate in his re-election campaign rally.”

PDP, in a statement signed by the party’s National Publicity Secretary, Kola Ologbondiyan, added that the sends a wrong signal to the public as Service Chiefs are supposed to be professional and neutral; when it comes to politics.

The statement continues, “The participation of Service Chiefs in Muhammadu Buhari’s campaign rally tagged, “Next Level” is completely unacceptable and objectionable and sends a wrong signal to the public regarding the expected professionalism, neutrality and detachment of the institution of the military from politics.

“We know that Buhari, in his desperation to rig and foist himself on the nation in the 2019 election, will stop at nothing in his attempt to compromise and desecrate our institutions, but doing so on the military is a clear invitation to crisis and derailment of our democracy.” 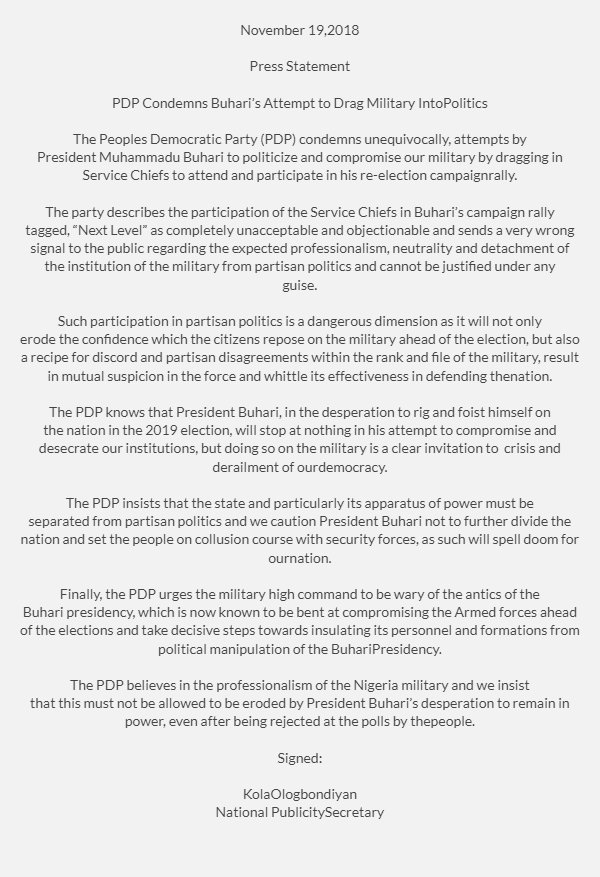