It’s a free world and the social media has made it even easier for users to air their view.

Movie director and writer, Charles Novia, known for speaking out his mind stepped on toes moments ago when he called out singer Seyi Shay for rocking a ‘sheer’ outfit at the Channel O Music Video Awards in South Africa.

“She said she wants murder and dressed like that? She got her wish Nonsense and ingredients! Lame thinking for a lame career. You build a ‘sweetheart brand’ which visibly competes with a better rival and then veer off…Let me be frank: that Bad Girl/Boy image never works. You get the lunatic fringe crowd edging you on and then they switch to the next one. You wey dey don form Bad Girl/Boy becomes limp and laggard. You become useless to the present order. That’s how it goes. It’s what it is,”  Novia tweeted.

Yea, we gotta admit  that despite her ah-mazing looking hair, R&B/Pop singer, Seyi Shay’s black Chanel sheer dress which exposed her equally black Rebel pair of lingerie at the #CHOAMVA2014 kinda freaked many out but rather than leaving it at that, Brother Charlie made attempts to annihilate the pretty singer’s career.

“Yemi Alade, Asa, Omawunmi, Waje didn’t need to be near naked to be on top. They were judged on their TALENT and made it. Commendable. Let your talent speak for you always. If you don’t have it, nothing can force anyone to accept it. This business thrives on talent not tart,” he went on.

And that action has got him into a verbal war with notable media personalities, Daddy Freeze and Funmi Iyanda. 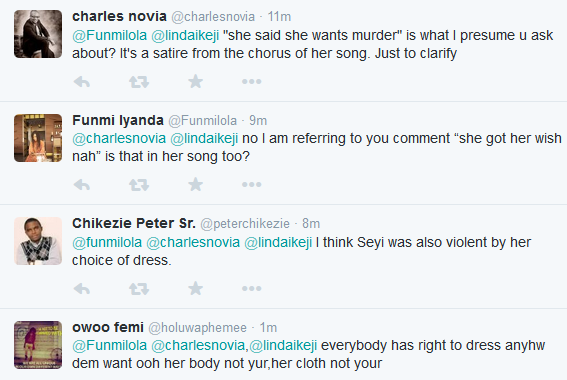 Charles had to swallow his pride and apologize for his statement – but the damage might take a while to dissipate from Seyi Shay’s heart.

The “Murda Them” singer is yet to respond though – will she?